As the California Democratic Party crumbles...
California's Democrats meet to create a winning
year, only being anti-Trump may not be a panacea

This morning the California headline from Politico is Democrats fear California crack-up while the Los Angeles Times tells us California Democrats agree they have too many candidates for Congress. What to do about them is the problem.

Some 3,400 delegates to the 2018 California Democratic Party State Convention in San Diego will vote Saturday on endorsements for governor, U.S. senator, other statewide offices and the Board of Equalization.

The three-day convention began Friday with a series of caucus meetings, workshops  and panel discussions.

The delegates will adopt the 2018 party platform Sunday and ratify endorsements for congressional and legislative races made earlier at pre-endorsing conferences and endorsement caucuses.

It's a big deal. That Convention includes about 1,000 more delegates than attended the Republican National Convention in 2016. Those 3,400 delegates hope to have an impact on our government.

As the LA Times article explains:


Democratic activists in Orange County threw an impromptu party with cake, party hats and singing after Republican Rep. Darrell Issa announced he was retiring.
But the exhilaration over the opportunity to capture a Republican congressional seat quickly turned to political panic.
There are so many Democrats running for Congress in some districts that they could split the votes in the June 5 primary and send two Republicans to the November election, thanks to California's top-two primary system. Democrats need 24 seats to reclaim the majority in the U.S. House — and are putting money and attention toward 10 California contests. In other words, every race matters.
The volume of Democratic candidates is a particular problem in Issa's 49th Congressional District in San Diego and south Orange County.
On a recent phone call with 300 local activists, organizers fretted over the entry of a fifth Democrat into the race and rumors about a sixth.

In that situation it is likely the Republicans will likely divide up 50%+ of the vote in the 2018 Primary Election but there are currently seven Republican candidates who have filed. One person has field as a Peace and Freedom Party candidates. And five Democrats have filed. So 13 have filed!


But don't stress. We Californian's figured out what "the establishment" is - POLITICAL PARTIES. And as usual we are as far out in front of the movement as we can be. There are no party primaries in California except for U.S. President, which we can't control, and for traditional county-level party central committees, which are quaint useless groups anyway.
Now, it is true that California for over a century had many local and a few state "non-partisan" office elections in which no political party is indicated for any candidate. But on June 8, 2010, California voters approved Proposition 14, the Top Two Candidates Open Primary Act, which allows all voters to choose any candidate for a statewide or state and federal legislative office regardless of the candidate’s or voter’s political party preference.
The goal was to get the parties out of the election system.
It took a few years for things to begin to "adjust" to this change. But apparently by 2016 the voters have gotten what they want....
...There are 34 candidates for U.S. Senate this year. Before Prop 14, in a U.S. Senate primary a voter had to select from a few candidates seeking nomination in his/her party. Now they are confronted with 34 who don't have to report to any party members after getting elected.
And it may relegate political parties to the landfill of history, which could be a serious problem.


But the focus here is the potential demise of the two political parties. Guess what - Bernie Sanders doesn't belong to either party - effectively he is an independent who, to use the Pew Study phrase, "leans Democratic" like the Millennials. So Millennials could relate to him and they don't relate to the political parties.
I'm a Californian. California is the first state to eliminate the partisan primary.
Also here in California, Governor Jerry Brown is 78, Senator Dianne Feinstein is 83, Senator Barbara Boxer is 75, and our most famous member of Congress Minority Leader Nancy Pelosi is 76. The Chairman of the California Democratic Party former Congressman John Burton is 83.
In California back in 2012, Millennials were 29% of the population, Gen-X'ers wer 21.8% of the population, Baby Boomers were 23.4% of the population, and the Silent Generation was 9.4% of the population. All people who hold power in the Democratic Party are of the Silent Generation.
That is embarrassing - we have a non-representative government - literally a gerontocracy meaning per Wikipedia "a form of oligarchical rule in which an entity is ruled by leaders who are significantly older than most of the adult population."
Folks in other states should get to know this logo:

.
Slowly that half of the Millennials who do not consider themselves part of either community known as the Democratic Party and the Republican Party will take control of who gets to be on the General Election ballots in California - the largest state in population with the largest number of electors in the Presidential Electoral College. At some time in the future the top two candidates for a statewide office will both not identify with a party.
The California Democratic Party is only nominally in control of the election to replace the retiring U.S. Senator Barbara Boxer because both General Election candidates are Democrats. But their party affiliation predates the California Top Two Primaries Act.
This is the first statewide election under the "top 2" system and the party system is starting to crack. The California Republican Party has essentially collapsed.
The "top 2" system has forced a division within the Democratic Party that erupted publicly when Democratic President Barack Obama endorsed Democrat Attorney General Kamala Harris, a black woman. Her opponent Latino Democrat Congresswoman Loretta Sanchez' response should be a warning to the Democratic Party that the biggest controversy in the future will be the Party itself....

The following June it was noted here emphasis added:


Democratic Senator Dianne Feinstein, who will be 85 next year at 2018 General Election time, is indicating she will run again. Should she win, she will be 91 when the term ends. But how that all plays out in our nonpartisan blanket primary system will be interesting.
One possibility is that the Neoliberal political machine could disrupt the 2018 nonpartisan blanket primary for Feinstein's Senate seat, perhaps funding a run by a younger non-partisan candidate who could literally run on a platform challenging the power of the federal government now controlled by Republicans.
Such an effort might not succeed in 2018. The California Democratic Party still has access to money and people on the ground.
But Party Chairman John Burton retired this year and the process of replacing him has sown discord - about half of the active California Democrats are disgruntled that no real change has occurred. U.S. Senator Barbara Boxer retired and the contest to replace her has left an open sore, particularly among Southern California Hispanic Democrats. Governor Jerry Brown is termed out and will retire at the end of 2018. That will reduce the gerontocracy members of the party leadership to House Minority Leader Congresswoman Nancy Pelosi who is under attack at the national level and Senator Dianne Feinstein who is about as conservative as a California Democrat can get.
So to repeat myself, here in Democratic California we are likely three general elections (seven years) away from Democratic voters and elected officials understanding the full impact of our nonpartisan blanket primary system. The traditional party system will be meaningless, leaving California Democrats, like California Republicans, with little partisan power within the state or nationally.
What is not reported in the press is that Burton, Boxer, Brown, Pelosi, and Feinstein are essentially "Bay Area" white people while the vast majority of Californian's live south of the Tehachapi Mountains and are the majority of Californian's are not white.
California Democrats have hidden the meaning of the geographical split. The Bay Area generally is far more inclined to cultural liberalism. Once the Southern California influence gains strength, Hollywood notwithstanding, at the national level the meaning of being a California Democrat will change. And it was California that gave Hillary Clinton here majority in the national popular vote when the California Democratic Party was controlled by a white gerontocracy.

This November we will vote in the first of those "three general elections" likely necessary before all "Democratic voters and elected officials [understand] the full impact of our nonpartisan blanket primary system."

What the 2018 California political process beginning this weekend will mean to future government policy is anyone's guess. But it will be interesting to this delegate to the 1964 California Democratic Council Convention held during the weekend of February 22, 1964 (yeah, that's 54 years ago). That too was a disruptive time. But political disruption doesn't guarantee a good outcome. 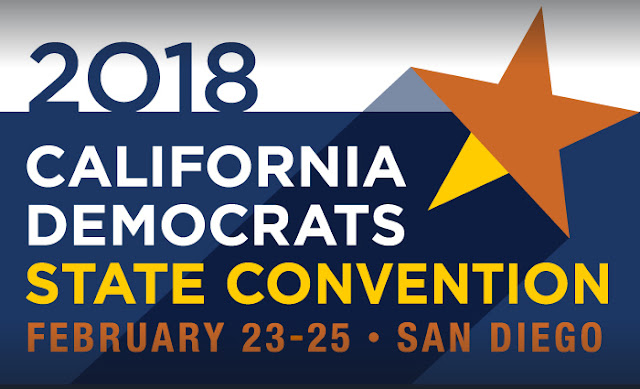 to be continued
Posted by Michael O'Faolain - at 4:54 PM