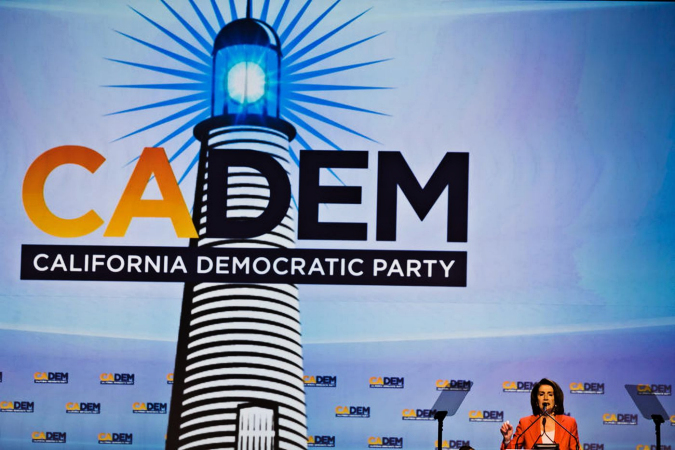 As of today, the desire by California voters to turn elections over to monied interests was ratified by the California Democratic Party.

Concerned California voters can always be described as "well meaning" when they enable solutions to political problems.

For instance, as part of Progressive era reforms the voters in California counties were given initiative powers in 1893, in 1898 San Francisco and Vallejo became the first cities to adopt the initiative process, and in 1911 a new Progressive majority in the legislature gained the adoption of the initiative, referendum, and recall processes at both the state and local levels approved by voters in a special election on October 10, 1911.

Further, the solution to the problem of "machine politics" in political parties in 1909 wasn't for the 2+ million Californians to get more involved, but rather it was to establish a direct party primary system.

Unfortunately, to understand what's happening you have to understand some California history and the people with the least imagination possible - Progressives. So this post will be long. And to make clear just how unlikely Progressives will anticipate the obvious, we'll begin by exploring the initiative process before taking up the process of nominating candidates for office.

Monied special interests began to explore how to use the initiative process after the end of WWII as the population had increased five-fold since 1911.

A 1956 initiative regarding changes in the state regulation and taxation of oil and gas production was sponsored by one group of oil companies that sought to make their business more profitable and opposed by another group of oil firms that preferred the existing system. Campaign funds spent by both sides totaled over $5 million ($46 million in today's dollars). Almost as expensive was the gargantuan 1958 labor-capital conflict over a "Right to Work" (open shop) initiative sponsored by employers.

The California initiative process gave rise to a new breed of campaign professional: the paid petition circulator. With signature requirements doubling nearly every decade, citizen groups were unable to rely solely on volunteer effort. As early as World War I, Joseph Robinson was offering his organizing services to initiative proponents. His firm, which paid its employees a fee for each signature brought in, had a virtual monopoly on the petition business from 1920 to 1948 - a period during which, Robinson estimated, his firm was involved in 98 percent of the successful statewide initiative petition drives. And so monied interests took notice of the basic flaw in the Progressives' thinking.

California liberals discovered just how flawed the initiative process of letting voters be "lobbied" by expensive advertising was when two measures passed by voters in 1964. The first repealed the Rumford Fair Housing Act, which the legislature had passed, and Governor Brown had signed, in 1963. The second banned cable television. That measure was sponsored by theater owners who, fearing competition, advertised the initiative as guaranteeing "free television" and eliminating the specter of "pay television." (Both 1964 initiatives were later overturned by the courts as unconstitutional.)

California's most famous initiative was Proposition 13, approved by voters in 1978. Much like the 2017 income tax reform, the measure gave long-lasting significant tax relief to major corporations and wealthy land-owning families while giving limited-duration tax relief to middle-class homeowners. And yet, just like the 2017 income tax reform, Prop 13 remains enshrined for most middle-class voters despite the fact that the largest beneficiaries are corporations like Chevron which is  is saving over $100 million a year in property taxes statewide while the owners of recently purchased homes get no benefits.

And in a 2010 the voters approved Proposition 14 finally removing the parties from directly competing against special interest money in elections.


How the "top 2" primary will benefit monied interests

We know, in California at least, that the voters' solution to the problem of machine politics and monied interests in political parties is to give the monied interests more direct control over electing officials.

As explained above, the solution to the problem of "machine politics" in political parties in 1909 wasn't for the 2+ million Californians to get more involved, but rather it was to establish a direct party primary system. That system was modified - tweaked, really - several times by the voters over the years because there were always some dissatisfied voters. But it was basically replaced in 2010 by Proposition 14.

Proposition 14 was submitted to the voters as a proposal to amend Sections 5 and 6 of Article II of the California State Constitution relating to elections. It is officially known as the Top Two Primaries Act.

It was authored by Republican State Senator Abel Maldonado as Senate Constitutional Amendment 4 of the 2009–2010 Regular Session (Resolution Chapter 2, Statutes of 2009). It was based on a 2008 proposal drafted by the Independent Voter Project, an organization that has questionable financial ties related to Republicans Charles  Munger, Jr. and Vigo G. Niesen, Jr. It was passed in the State Senate by a vote of 27 to 12 and in the State Assembly by a vote of 54 to 20.

The proposition was publicly backed by Governor Arnold Schwarzenegger as part of a deal in which Maldonado agreed to support his proposed 2009–2010 state budget. It was opposed by political parties.

Maldonado was appointed Lieutenant Governor by Schwarzenegger in 2010. Schwarzenegger, who could have never been nominated in either political party, was elected outside the partisan primary system as a Republican when Governor Gray Davis was recalled in 2003.

With the 2010 adoption of the Top Two Primary pursuant to Proposition 14, all candidates running for an office are listed on one ballot, regardless of their party preference. A candidate’s party has no impact on how the election is conducted or who is allowed to advance to the General Election. Instead, candidates go on to a run-off election based solely on how many votes they receive in the Primary.

The two candidates who receive the most votes are "voter nominated" and qualify for the general election, hence the name “Top Two.”

A candidate nominated for a voter-nominated office at the primary election is the nominee of the people and not the official nominee of any party at the following general election. A candidate for nomination or election to a voter-nominated office shall have his or her party preference, or lack of party preference, reflected on the primary and general election ballot

But that party preference designation is selected solely by the candidate and is shown for the information of the voters only. It does not constitute or imply an endorsement of the candidate by the party designated, or affiliation between the party and candidate, and no candidate nominated by the qualified voters for any voter-nominated office shall be deemed to be the officially nominated candidate of any political party.

This all sounds very democratic, no party shenanigans screwing with the interests of the brilliant voters? So how does this all mean that the voters have successfully turned elections over to monied interests?

The answer is simple. If the parties aren't actively backing candidates in the primary, the money will come from somewhere. Nonetheless, the California Democratic Party does endorse some candidates, so that has to mean something, right?


What happened in San Diego this weekend?

Looking at the list of the 2018 California Democratic Party (CDP) "endorsements", or many cases lack thereof, the first question is "does it matter?" Well, maybe.

A study was done on the 2012 Primary, the first Top Two, regarding the outcome of which the authors state:


Depending on how we ran the analysis, we found an endorsement effect of somewhere between seven and 15 points.
This isn’t necessarily an enormous effect. A particularly skilled or lucky candidate could beat the party’s preferred one, but not easily. What this study does show is that those who receive this one endorsement get a substantial advantage in the primary election, and this is an endorsement worth fighting for.

The problem is that this study was done on the first Top Two primary. The 2018 primary will be the third. The voters are getting used to the idea that partisan affiliations may not be very important or even undesirable.

And the curious thing is that the California Democratic Party has chosen to not endorse in key races where it could matter, as well as in some important races where it probably won't matter.

From the viewpoint of the press, the most important thing that happened in San Diego this weekend was the failure of the CDP to endorse incumbent Democratic U.S. Senator Dianne Feinstein. There was no endorsement for this position.

What the voters might find interesting is who has filed to run in the Top Two Primary for that seat:
With that large a lineup, it seemed an endorsement might have helped. And, in fact, it might have had Kevin de León been able to get it. He received 54 percent of the vote, just short of the 60 percent threshold to capture the Democratic endorsement, while Feinstein received only 37 percent.

The thing is, both have been running since October. At the end of the year de León had raised about $500,000 while Feinstein had nearly $10 million on hand, including $5 million of her own money.  Also a Public Policy Institute of California poll released this month showed Feinstein leading among likely voters 46 percent to 17 percent.  Nearly two-thirds of respondents had never heard of de León or didn’t know enough about him to form an opinion.

The Party also did not endorse for the Governor, Lieutenant Governor, and Attorney General offices. Unlike the U.S. Senate seat, the Governor's race is not clear cut. Here is a list of who has filed for the seat with the CDP Convention delegate vote share for endorsement (again, 60% needed):
Obviously, the California Democratic Party is meaningless in this contest. Every candidate is going to have to find his or her own funding, aka donors.

This situation extends further down the line.

As noted in the previous post, Party officials were concerned about too many candidates for certain previously Republican Congressional seats where the incumbent is not running. For instance in the 49th District where Congressman Darrell Issa is not running, the Party failed to make an endorsement - the only consolation is the along with the five Democrats, there are seven Republicans who have filed to divide up the vote on the other side. (There is also a Peace and Freedom Party candidate.) A similar situation exists in the 39th District.

In three other Districts - 1, 10, and 25 - where the incumbent Republican will be running the Democrats failed to endorse a candidate in the Primary.

In all of these cases, to end up in the top two Democrats will need to compete to find their own funding and supporters.

Obviously, in all these election contests "outside" money could begin filling the vacuum left behind by an absent party. This was the year Democrats were going to reassert themselves nationally. But in California the Party is absent in the race for U.S. Senate, Governor, Lt. Governor, Attorney General, and numerous down-ballot contests.

In the previous post the prediction is made that it will take the 2018 election cycle and two more before the role of political parties in California as we know it will be eliminated. In the election of 2024, the State's voters will experience a new political system of competition.
Posted by Michael O'Faolain - at 10:40 PM