The Second American Civil War begins in an assault on the most dynamic people in California's tech, farm and service sectors 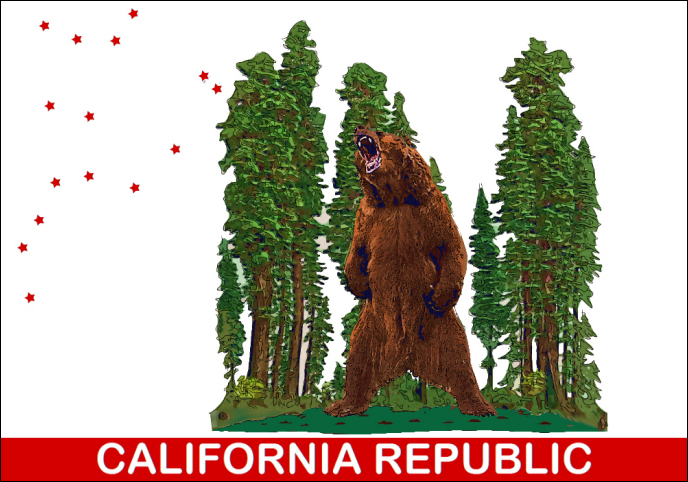 Match these names...
...with these descriptions...
Which of them are immigrants? If you can't match them and/or didn't know they were all immigrants, you don't know much about what makes the California (and the U.S.) economy work in the 21st Century.

So last week the Second American Civil War was launched by the President of the United States of the Rust Belt against the California Republic as an attack on the our farming, technology, and service economic sectors. We began to get battlefield stories: 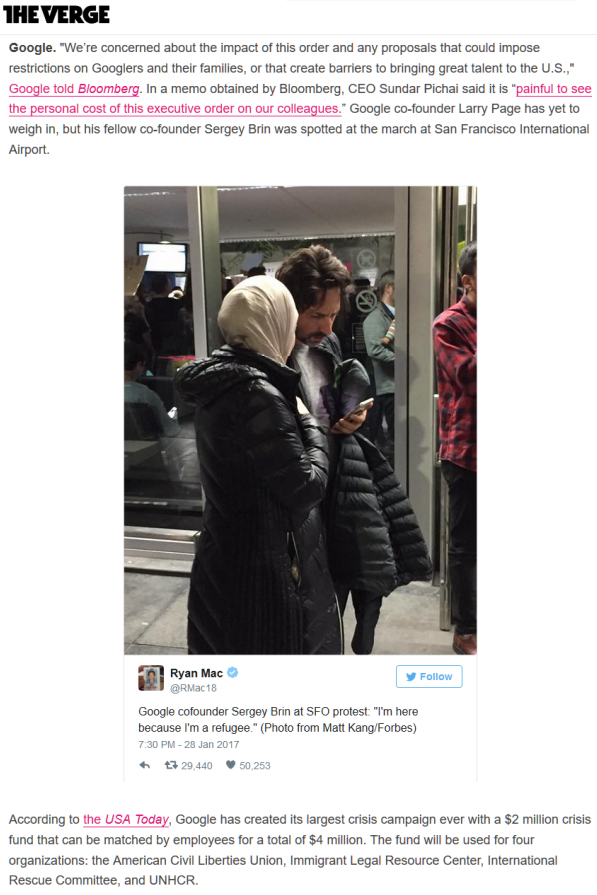 See if you can see a subject matter theme running through the headlines below (you can click on the images to link to a story or Google the headline): 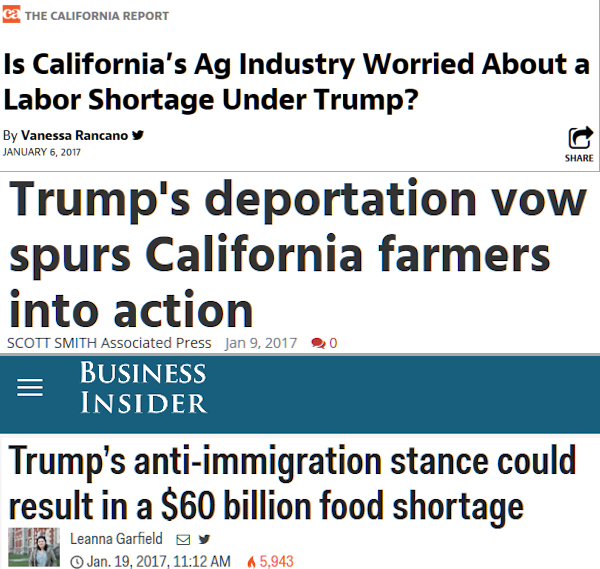 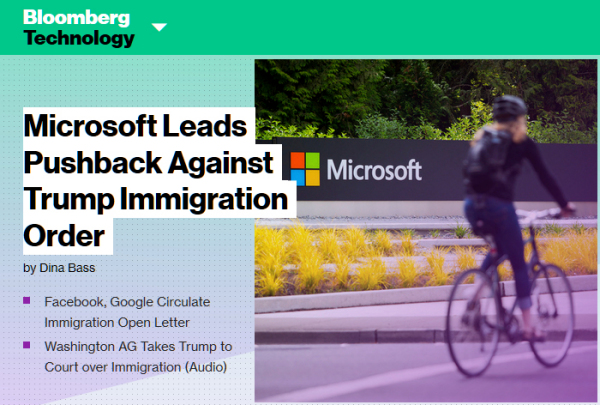 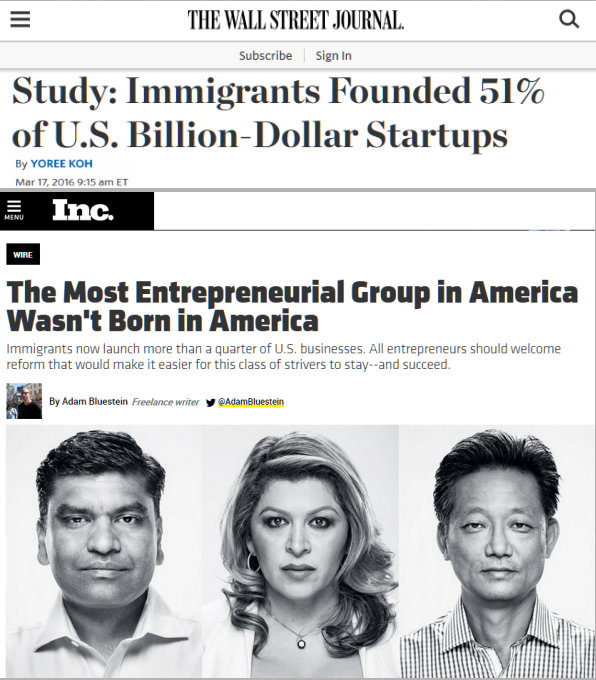 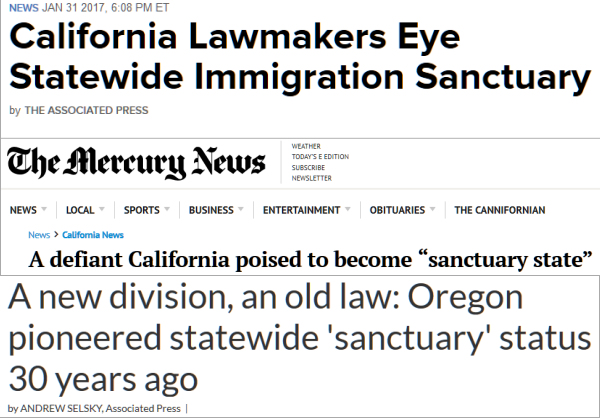 As explained in detail in another post, migrants, both legal and illegal, have been the force that has made California's economy work for the past 150 years. And we intend to protect that economy.

But we are not alone. Microsoft, mentioned as taking the lead in the pushback against the immigration polic of the President of the United States of the Rust Belt in one of the headlines above, is located in Washington State. On November 14, 2014, Microsoft overtook Exxon Mobil to become the 2nd most valuable company by market capitalization, behind only Apple Inc. Satya Nadella is Microsoft's CEO and an immigrant.

And as indicated in the headline above, Oregon has had a statewide sanctuary law since 1987. In the article we are told:


Oregon Gov. Kate Brown said she will enforce that law.

With all of that said, I hope we will recognize just how badly California's California Empirical Egalitarian Progressives failed in the past few decades.

Consider the current outrage about the combination of the deportation issue and "The Wall."

Regarding deportation, the number of deportation during the 16 years of Presidents Bush and Obama was roughly double the number deported in the 105 years between 1892 and 1997. A record number of people were deported from the U.S. during Obama's tenure as President. The reason for this has nothing to do with Bush or Obama - there were after all only Presidents, perhaps the least important politicians you elect to office.

The current deportation program is a Congressional program that began with the Immigration Reform and Control Act (IIRCA) of 1986. The increased deportation is the result of the immigration detention bed quota which has steadily increased since its establishment in by Congress in 2009 during Obama's first year in office.

The quota refers to language in the annual congressional appropriations law that currently requires U.S. Immigration and Customs Enforcement (ICE) to maintain 34,000 immigration detention beds on a daily basis. No other law enforcement agency is subject to a statutory quota on the number of individuals to hold in detention.

Despite all the publicity generated by the President of the United States of the Rust Belt which has resulted in California's politicians loudly proclaiming its cities and schools as "sanctuary" locations, they weren't all making the same loud proclamations during the Obama administration's record deportation years.

Regarding "The Wall" we might want to look at a picture or two before we get all hot and bothered by that publicity: 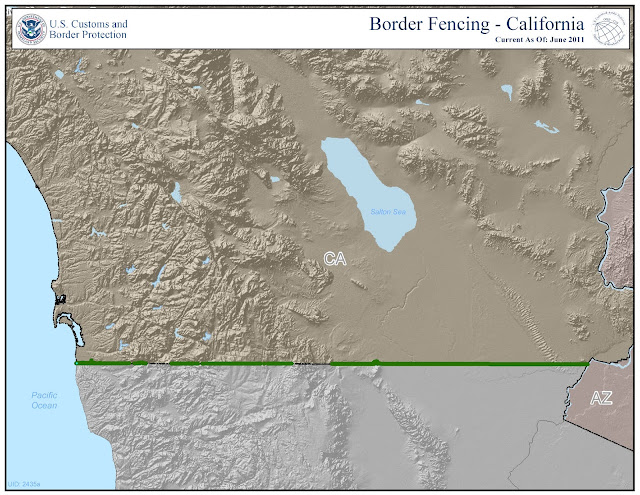 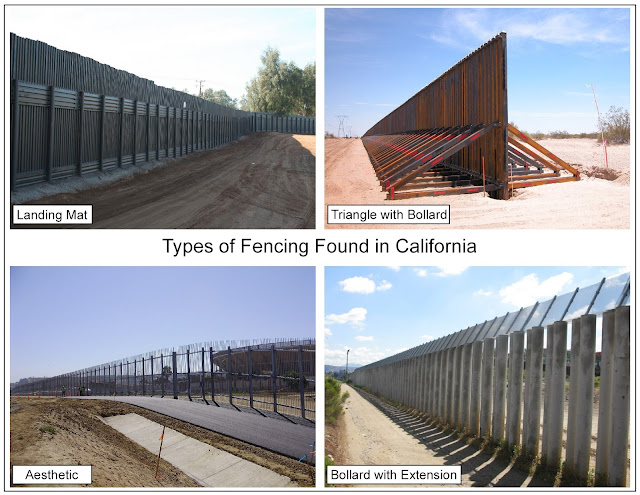 Click on image to see the original and story!

But this "wall" isn't perfect as the map above indicates because there are two areas where the fence ends leaving gaps such as this one not far from the fence pictured by National Geographic: 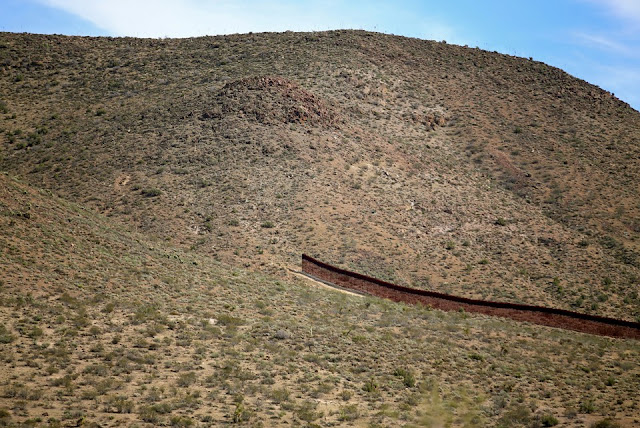 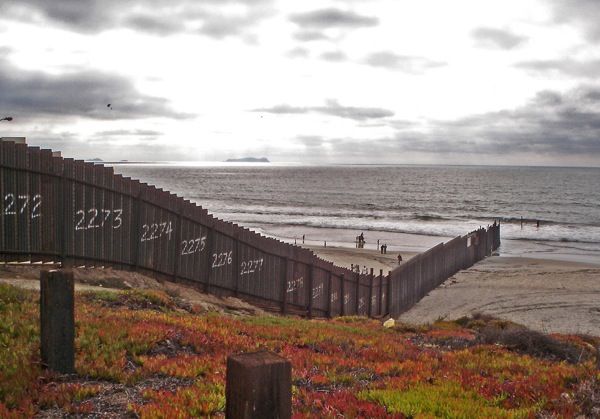 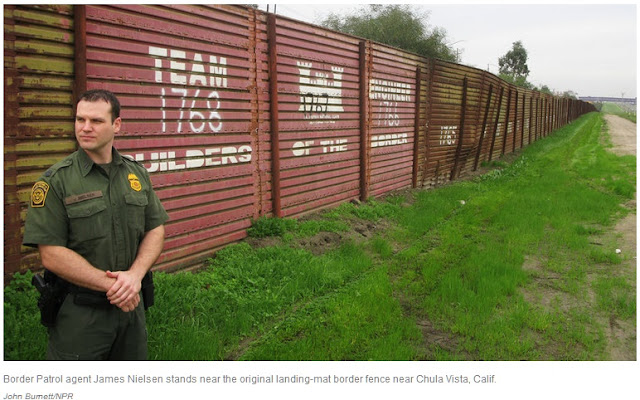 My problem is I forget a lot. So perhaps I'm forgetting the outrage over the "walling" of California's southern border when the work was being done. Yes, some complaining like in this story: 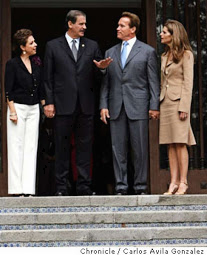 Gov. Arnold Schwarzenegger plunged into politics on both sides of the border Thursday -- praising the midterm election results as change that will bring "new blood" to Washington, and criticizing the 700-mile border fence favored by GOP legislators and President Bush as an "incomplete" solution to illegal-immigration issues.

The governor made the comments at the start of a busy day in the Mexican capital following a private breakfast with outgoing President Vicente Fox at Los Pinos, the official presidential residence. Schwarzenegger, accompanied by first lady Maria Shriver, met with Fox to discuss immigration and trade issues and to encourage further efforts on both sides to control greenhouse gases.


But let's not pretend that California has led the way. In 2011 the New York Times in this story States Resisting Program Central to Obama’s Immigration Strategy explained:


A program that is central to President Obama’s strategy to toughen enforcement of immigration laws is facing growing resistance from state governments and police officials across the country.

Late Wednesday, Gov. Pat Quinn of Illinois said he was pulling his state out of the program, known as Secure Communities, the first time a state has sought to withdraw entirely. In California, where the program is already under way throughout the state, the Legislature is considering a bill that would allow counties or police agencies to choose whether to participate.

Under the program, the fingerprints of every person booked by the police are checked against Department of Homeland Security databases for immigration violations. That is in addition to routine checks against the F.B.I.’s criminal databases.

In fact, in 2011 the Legislature approved the bill mentioned in the story but Governor Jerry Brown vetoed it!

Thus in 2011 as a result of Brown's veto, San Francisco, which became a sanctuary city in 1989, took action to stop participation in the Secure Communities program and city officials strengthened the stance in 2013 with its Due Process for All ordinance. Obviously, since the Legislature had approved the bill Brown vetoed, most California Democrats had serious problems with U.S. immigration policy.

Hopefully, in the future California's governments at all levels will offer a strong defense of our economy's farming, technology, and service sectors as reflected in these headlines: 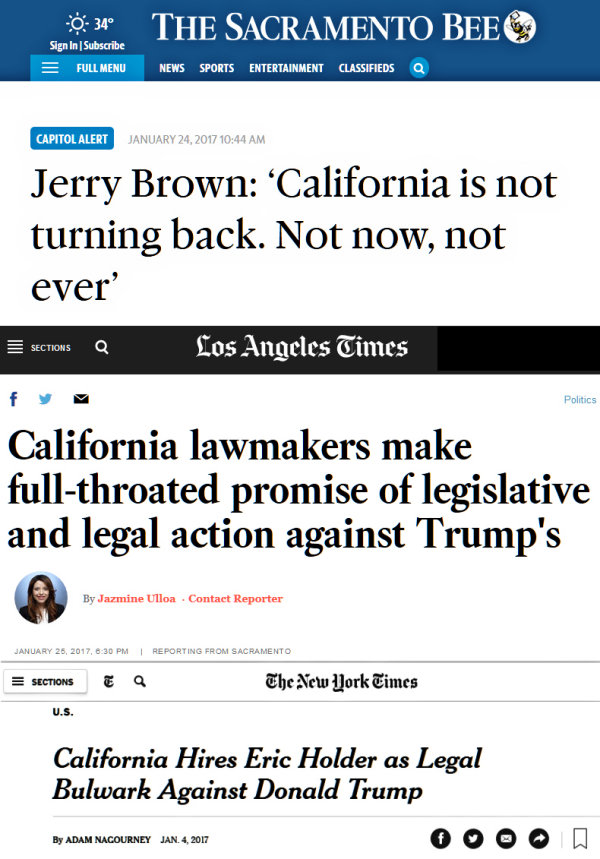 It appears that we are now unified and moving to get a handle on a broad range of related issues. For instance, this year the California State Senate is considering two bills that would create a database firewall between California and the federal government.

State and local governments in California possess myriad databases that the administration of the President of the United States of the Rust Belt might try to use to locate and deport immigrants and to register Muslims. Many government agencies (including police, human services, and universities) gather and store a host of personal information (including names, addresses, and social security numbers) from vast numbers of people. Federal data miners could abuse these state and local databases to pursue immigrants and Muslims.

Senate Bill 54, authored by Senate President Pro Tempore Kevin de León would prevent law enforcement agencies in California from sharing department databases or private information with the federal government for immigration enforcement. It would also require California state agencies to update their confidentiality polices so that they stop collecting or sharing unnecessary data about every Californian.

Senate Bill 31, authored by Sen. Ricardo Lara, would prevent local and state government agencies from collecting data, sharing data, or using resources to participate in any program that would create a registry of people based on their religion, ethnicity, or national origin. Police agencies would also be forbidden from creating a database of religious minorities in California.

Fortunately the Silicon Valley culture stimulated the creation in 1990 of the Electronic Frontier Foundation (EFF), located in San Francisco, to assure that these kind of tech efforts can work. EFF was founded by three eccentric internet and computer technology pioneers John Gilmore, John Perry Barlow and Mitch Kapor in response to a series of actions by law enforcement agencies that led them to conclude that the authorities were gravely uninformed about emerging forms of online communication, and that there was a need for increased protection for Internet civil liberties.

For many years, EFF mong other things has fought government use of cutting-edge technology to target immigrants. EFF opposes biometric surveillance of immigrant communities, rapid DNA analyzers as a tool of immigration enforcement, and social media monitoring of citizenship applicants and foreign visitors. Likewise, they resist street-level surveillance, such as the broken CalGang database, which all too often has an unfair disparate impact against immigrant communities, as well racial, ethnic, and religious minorities.

In the wake of the inauguration of the President of the United States of the Rust Belt, EFF has redoubled its opposition to high-tech government attacks on our immigrant and Muslim friends and neighbors. It is going to require Californian's like those in the EFF organization to protect the future of California and the Earth.

Finally, consider spreading the words and images of this Bloomberg video which was included with the story This Is America Without Immigrants: Give up your iPhone. And no more Googling. Or Boeing: