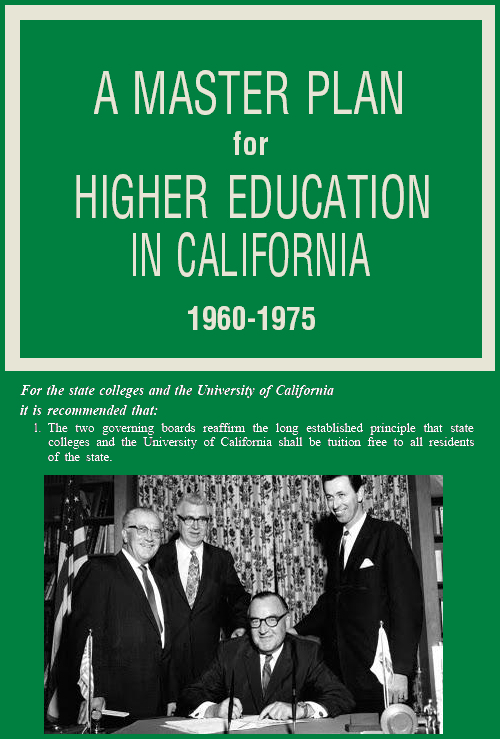 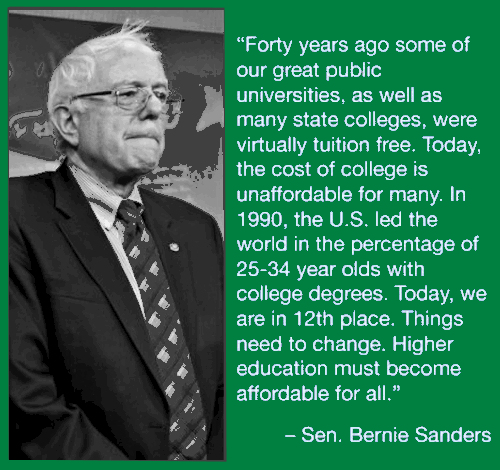 In 1962 when I entered the University of California there was no tuition. Nor was there tuition at any other state college in California. Let me introduce you to California Master Plan for Higher Education implemented by bills adopted by the Legislature and signed into law in 1960 by Governor Pat Brown, the late father of current Governor Jerry Brown which states:


For the state colleges and the University of California it is recommended that:


Unfortunately, one of the impacts of Proposition 13 sponsored by corporate interests and approved by the voters in 1978 was to force the modification of that policy. Because the State had to fund from its General Fund more of the costs of primary and secondary education, the tuition-free college policy could not be sustained.

Literally, inexpensive college education in California was one of the first victims in the United States of the Neoliberals who used a populist backlash against rising taxes to eliminate working class opportunities for higher education established under the Empirical Egalitarian Progressive movement. (Empirical Egalitarian Progressivism is always attacked by Neoliberals as "socialism" despite the fact that it does not advocate in any way against the private ownership of property.)

California has struggled as an imperfect home for Empirical Egalitarian Progressivism which can be summarized as follows:
As implemented, the California version of Empirical Egalitarian Progressivism includes:
Distributive justice is about how rewards and costs are distributed among members of a group (or a city, state, or nation) which takes into account five conflicting "norms" that typically confront groups. These can be summarized as:
With the goal of assuring the long term survival and success of California and Californians, these norms are used within society, economics, and government, giving priority in the order they are listed above to set the course for the ship of state. The first four are understood as requirements applied to keep the ship running.

The last is then used to adjust (meaning to "tweak" not "reverse") the final heading - it is used as the "fairness" standard of mediation that keeps everyone on board and avoids a mutiny.

It all requires commitment and compromise.

"Need", or more accurately in this setting "common needs", is a term not limited to economics. In terms of the individual perspective,  Abraham Maslow's hierarchy of needs applies: 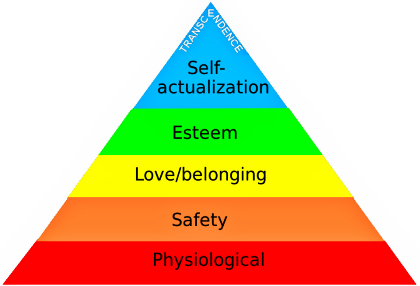 Advocates of California Empirical Egalitarian Progressivism understand that The Universal Declaration of Human Rights of 1948 placed the burden on government, with the obligation of support from every person and organization, to assure that the physiological and safety needs of all persons are met.

Further the Universal Declaration also placed the responsibility on every person, organization, and government to see that everyone's needs for belonging and for esteem are met to the limited extent the norms of distributive justice allow.

California courts have cited the Universal Declaration to support their interpretation of the right to practice one’s trade, the right to privacy, the meaning of “physical handicap,” the right to freedom of movement, and the scope of welfare provisions.1

California always leads the way, and the rise of  Neoliberalism is no exception. A mid-20th Century Neoliberal attempt to crush California Empirical Egalitarian Progressivism became a springboard for a future nation-wide movement. The Neoliberals failed in California only after the anti-flower-child populist backlash of the 1960's ended with Proposition 13.

In California the Neoliberal influence became evident in 1967 when Ronald Reagan defeated Pat Brown. Governor. Reagan went on to become President in 1981 because he was the America's most effective spokesperson for Neoliberalism using the alternative reality game. His internship among the Neoliberals started 26 years before he was nominated for President.

Reagan was hired by General Electric (GE) in 1954 to host the General Electric Theater, a weekly TV drama series and to give talks to over 200,000 GE employees as a motivational speaker. His speeches carried the Neoliberal re-education message. Reagan was influenced by Lemuel Boulware, a senior GE executive whose ideas have been called "Boulwarism." In a 1949 address at Harvard Boulware stated:


We have simply got to learn, and preach, and practice what’s the good alternative to socialism. And we have to interpret this to a majority of adults in a way that is understandable and credible and attractive.

After Reagan's two terms as Governor, in 1975 Jerry Brown began his first two terms as Governor. Even though there were Republican Governors following Brown's second term, beginning in 1975 the Democrats controlled both houses of the Legislature except in 1996-96 when the Republicans had a majority in the Assembly, though the wily Democrat Willie Brown continued as Speaker for the first half of 1995.

But, of course, in 1978 Proposition 13 was passed which gave corporate owners of industrial, commercial, and apartment properties a significant long-term tax break at the expense of public education at all levels and the stability of the State's finances. It's not that the populist backlash against property taxes had no underlying causes. But most of those causes were essentially the result of bad judgement by local officials elected and reelected by the the same voters who voted for Proposition 13.

To fund education and healthcare, in 2016 California voters approved a measure continuing until 2030 the provisions of a 2012 measure increasing personal income taxes on incomes over $250,000. This impacts the top 1.5% of Californians with a single income filing of at least $263,000 or a joint income filing of at least $526,000. This tax to fund education and healthcare reflects the first two elements of distributive justice that drives California Empirical Egalitarian Progressivism - Responsibility and Need.

And for the most part, since 1975 the Legislature has leaned towards California Empirical Egalitarian Progressivism. As a result, as of 2017 California voters elected to the Assembly and the Senate Democratic super-majorities (over ⅔'s).

So it would appear that California Empirical Egalitarian Progressivism is strong in this state. But that can be misleading.