The goal of terrorists is to heighten your fears - don't succumb, Donald!

When we see what happened in Nice, France, and Dallas, Texas, we have to remember that each was a criminal terrorist act of one person. We need to be aware of what terrorism is:


From Wikipedia: Terrorism, in its broadest sense, is defined as the use or threatened use of violence (terror) in order to achieve a political, religious, or ideological aim. The symbolism of terrorism can exploit human fear to help achieve these goals.

As Americans we know that we must not facilitate terrorist goals by succumbing to  "fear" as we were reminded by Franklin D. Roosevelt in his First Inaugural Address:


"This great Nation will endure as it has endured, will revive and will prosper. So, first of all, let me assert my firm belief that the only thing we have to fear is fear itself—nameless, unreasoning, unjustified terror which paralyzes needed efforts to convert retreat into advance. In every dark hour of our national life a leadership of frankness and vigor has met with that understanding and support of the people themselves which is essential to victory. I am convinced that you will again give that support to leadership in these critical days."

The reality is terrorism is not limited to the Middle East nor to terrorists acting for the ISIS cause. We American's know that.

We remember the 1995 Oklahoma City bombing by Timothy McVeigh and Terry Nichols. Because we are terrible at history, we don't remember the 1886 Haymarket affair and other tragedies. Many think terrorism is some potential danger new to the 21st Century.  It's not. 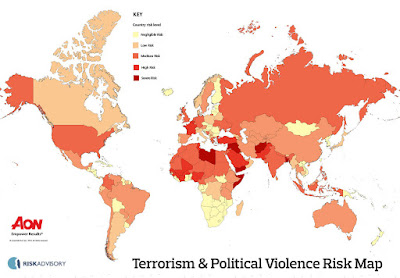 ...which if Mr. El Shafei had reviewed on the internet, perhaps he would have chosen a different country to visit, perhaps Italy, Poland, or Canada. Or maybe he would have stayed home in Egypt which which offers about the same risk as the U.S., a lessor risk than France.

Donald Trump wants to declare war on somebody. Frankly, we are all in more danger in a car, but we do not irrationally fear the car and I don't want someone to declare war on my Chevy. Let's don't amplify terrorist acts by overreacting, Donald!
Posted by Michael O'Faolain - at 3:10 PM