"Dissidents" are people who actively challenge established doctrine, policy, or institutions. This post is the first in a series of 10 posts regarding the confusing "revolutions" of the 2016 Presidential Election.


The political terms Left and Right were coined during the French Revolution (1789–1799), referring to the seating arrangement in the Estates General:
In other words, the terms were based on an 18th Century French seating chart. 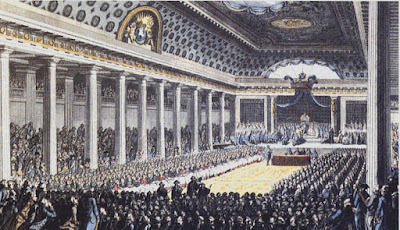 In many ways it was weird that those terms were incorporated into the political language of the United States; after all, the American Revolution created a secular republic.

If that isn't bad enough, we English speakers then divided into "left" and "right" the two extreme 20th Century implementations of tyrannical, totalitarian dictatorships - Nazi Germany and the Soviet Union - both of which embraced a strong, religious-like belief structure derived from a revered book.

It is even harder to understand logically how we got from there to a broad acceptance of the idea that...
...both of which embrace an economic philosophy that abhors centralized state control of the economy. If Rand and Chomsky had held public office they would have been in America's Academic Oligarchy by virtue of university affiliations, as that term is explained later in these posts.

What is odd is that politics and economics as academic studies somehow became separated in the minds of serious, but confused, people. Perhaps it is time we Americans remind ourselves of something: 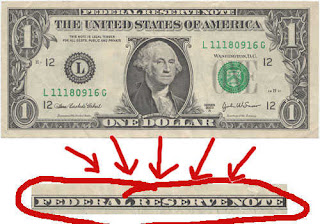 In the 21st Century, as it was in the 20th Century and half of the 19th Century, paper (and now digital) money is a central government created and controlled commodity.

For our first 65 years, from the founding of the United States to the passage of the National Banking Act, some 8,000 different entities - mostly state charted banks - engaged in the highly profitable business of issuing currency. In addition to encouraging rampant counterfeiting, this created an unreliable money supply as frequently these banks would fail. It also created a multitude of local economies, interfering with travel even between cities, much less between states.

Without going into all the complexities, by establishing a single national currency during the Civil War, the National Banking Act eliminated the overwhelming variety of paper money circulating throughout the country thereby facilitating a true national economy.

To put it as simply as possible, the central government controls the supply of money through  monetary policy and assures its acceptance as "legal tender" so that payment for labor and goods can be accomplished reliably. Further, the value of an asset - property - is measured by what someone would pay for it in dollars - federal reserve notes - not in pumpkins or "Bank of Nome Alaska" notes.

(As a side comment, Brexit is about money. It is no coincidence the United Kingdom never substituted the Euro for the Pound. The UK was only "sort of half in" when it came to the European Union. Thus in part the Brexit vote ironically reflected the reluctance of those who opposed Brexit to be a full participant in the first place.)

On the other hand, a government has a hard time coping with the impact of what people do with the money they are allowed to keep - after taxes sends some of that money back to its creator. Not to be repetitive, money is a government created commodity in the first place.

It is the dispute over how much wealth (measured in money) individuals and corporations can control versus how much the government controls that supposedly is reflected in the popular labels  "left" and "right."

What that has to do with gay marriage and being "liberal" or "conservative" demonstrates just how confusing these labels are and how little we understand the role of government in our society.

With the advent (the arrival of a notable person, thing, or event) of Brexit into British politics and Donald Trump into American politics, it's time for English speakers to toss the political terms "left" and "right" into the scrap heap of history. And based upon the vote in Britain and the weakness of the parties in the United States, we should reconsider our use of the labels "liberal" and "conservative" in politics.

In the second post of this series, I will discuss proper labels for people actively participating in politics and the economy either as members of "The Establishment" or as "dissidents."
Posted by Michael O'Faolain - at 10:56 PM