"Dissidents" are people who actively challenge established doctrine, policy, or institutions. This post is the fifth in a series of 10 posts regarding the confusing "revolutions" of the 2016 Presidential Election.

A "Shareholder Capitalist" is the year 2000 version of the year 1900 "Robber Baron." Robber Barons were business leaders in the United States, avaricious rascals who for personal gain habitually cheated and robbed workers, investors and consumers, corrupted government, fought ruthlessly among themselves, and in general carried on predatory activities comparable to those of the robber barons of medieval Europe but without violent armies.

Shareholder Capitalists tend to be more removed personally from their business presence than the Robber Barons of 1900. Shareholder Capitalists depend upon and reinforce the beneficial effectiveness and sanctity of the faceless "corporation" which:
It is at this point that we again need to understand that regarding corporations politics and economics have become separated in the minds of serious, but confused, people. Perhaps it is time we Americans remind ourselves of something: 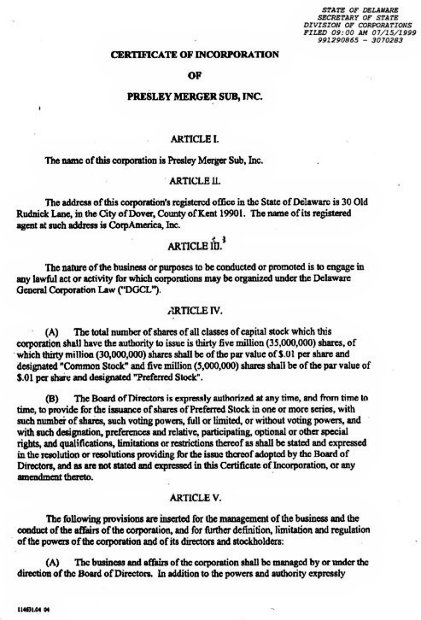 This is a typical incorporation document from the State of Delaware in which a lot of corporations are incorporated. It's similar to such documents in most states. Notice Article III which reads as follows:


The nature of the business or purposes to be conducted or promoted is to engage in any lawful act or activity for which corporations may be organized under the Delaware General Corporation Law ("DGCL").

In other words, as with money by definition corporations are created and controlled by government. Without corporation law there would only be individual people doing business with all the attendant major personal risks and significant financial limits. It's interesting that many Americans think government involvement in the economy is wrong. There would be no economy without government. This isn't even something that is debatable.

In other words Shareholder Capitalists wouldn't exist and can't do anything without government. Now that we've cleared that up...

Shareholder Capitalists include people or families who own or control (sometimes through an investment business) hundreds of millions of dollars of corporate stock and who likely serve on the board of directors of a number of corporations. Typically, the corporations involved employ more than 3,000 people.

A true shareholder capitalist within the corporation looks to achieve corporate profit goals without regard to the well-being of persons. Minimized compensation is made for the use of individual abilities required to further corporate goals. Since corporations have no personal prejudices, a true shareholder capitalist also ignores any and all labels that may apply to other persons related to nationality, religion, politics, race, ethnic group, class, age, gender, sexual preference, etc. Assets are assets and as the graphic above says "people are assets" like machinery and furniture.

Any "people" - person - can choose to be affiliated with Shareholder Capitalists by working as senior management within a corporate organization or by acquiring stock in corporations at share ownership quantities that have no meaningful impact on shareholder voting. If you are among either of those two groups and your personal situation has not led you to anger, you may choose to see your interests as coinciding with the interests of Shareholder Capitalists. Occasionally they are, but not always and not forever. And about outrage over CEO pay, you may want to read this election year article Beware big talk about the tax code.

Beyond becoming affiliated, the only way to share in the benefits of corporate success is to be an employee of a corporation or a vendor of supplies or services purchased by a corporation, but with the understanding that the corporation's goal will be to compensate you the least it can consistent with its goals and to that end may, and likely will, terminate your relationship at any time because of its goals - nothing personal, you understand, you're an asset and there's nothing "personal" about machinery or furniture or you. You may see yourself as affiliated with Shareholder Capitalists, but they rightly know you are delusional.

Primarily driven by the profit motive, today Shareholder Capitalists manipulate the world's economy and ours.

Successful 21st Century tech entrepreneurs are Shareholder Capitalists who have capacity and willingness to develop, organize, and manage a new business venture along with any of its risks in order to make a profit. Usually the most successful are seen as "innovative" meaning they bring some new product or service into the marketplace. Some attempt to mitigate the depersonalizing impact of Shareholder Capitalism through charitable activities.

We may need them to do more charitable work, because in a recent report about the tech industry KPMG stated (emphasis added):


...As part of this strategic priority to successfully integrate disruptive technologies to create unique customer value propositions and new ways to compete, tech CEOs say they are investing heavily in talent development, workforce automation and machine learning. The majority of technology companies plan to increase their human workforce at least 6 percent over the next three years while adding cognitive systems to create a new class of digital labor that can enhance human skills and expertise, allowing employees to innovate constantly.

Despite plans to grow their companies' worldwide human workforce 2% a year for the next three years, as expressed in this graphic the ultimate goal is to reduce the number of people with whom they share the revenue by automating as much of the tech industry as possible replacing workers with "digital" labor.

Given the report's comment that "U.S. Tech CEOs indicate India and the U.S. have the greatest potential for new market growth over the next three years followed by Brazil and China" it is unclear where the 5% of the workforce will be replaced and the 6% growth will occur. But it is clear that the greatest savings would come from reducing their U.S. workforce.

There are some parts of the economy that are outside that world controlled by Shareholder Capitalists. Small businesses, typically those that cannot become an employer of more than 3,000 people, are outside that world. Shareholder Capitalists, for instance those who control the banking system, do interface with these small business owners. And to an extent they attempt to persuade the small business owner that they all function in the same environment - capitalism. But they don't.

Agriculture is a peculiar sector of the economy. Only in recent times have Shareholder Capitalists managed to gain control in this sector. Despite the Industrial Revolution, the agrarian system  - which values rural society as superior to urban society, the independent farmer as superior to the paid worker, and sees farming as a way of life that can shape the ideal social values - resisted the Shareholder Capitalist. In the 20th Century, that changed, partly as a result of government policies established by Academic Oligarchists who found it easier to deal with Shareholder Capitalists than individual farmers.

Historically Shareholder Capitalists refrained from involvement in the political system except for lobbying.  They would work with the Academic Oligarchists in the executive branches of national and state governments and use the court system as needed.

That has changed. We will explore the change after reviewing the Academic Oligarchists class.
Posted by Michael O'Faolain - at 10:56 PM