That was followed by reports of a statement from the Think Long Committee like this one in the Sacramento Bee:


"It is clear from public reaction, stakeholder meetings and our own public opinion research that Californians are hungry for real reform and are more willing than ever to support a sweeping plan that is fair and will put an end to California's perpetual financial volatility and suffocating wall of debt," the committee said in a statement. "At the same time, we recognize the practical constraints of the 2012 election calendar - and have come to the conclusion that it will take more time to perfect these proposals, eliminate unintended consequences and provide every stakeholder and everyday Californians a meaningful voice in that process."

The Committee's proposal was described here in the post The billionaire's beauty and barber shop tax proposal.

In the meantime, Governor Jerry "Moonbeam" Brown's measure to increase taxes on the working poor and the very rich had to be resubmitted Friday. The Sacramento Bee reported:


Gov. Jerry Brown is taking a mulligan, tripped up by a typographical error and forced to re-file his ballot initiative to raise taxes.

The Democratic governor on Friday filed paperwork with the state for "The Schools and Local Public Safety Protection Act of 2012- ver. 2." The measure is identical to one Brown filed in December, the governor said in a filing with the attorney general's office, "except that we have corrected a typographical error that resulted in two numbers being transposed."

Re-filing an initiative can delay the attorney general's preparation of its title and summary, potentially condensing the period for a proponent to gather signatures and making that effort more expensive.

I don't understand how this could happen in an organization headed by such a smart man. (That's sarcasm.)

What's not surprising about this news is that what I call The California Federation of Teachers & Friends Tax Millionaires for Education, Social Services, Safety Services, and Road and Bridge Maintenance Initiative got the strongest support in the polls. It would get even stronger support if the press were honest about how the Governor's measure would impact on lower income workers.

In fact, perhaps one day the press in California will be honest about all the various tax measures in terms of who pays, what the added tax will look like in 2020 (i.e. it will have expired causing a replay of the current crisis), the likely impact on those who decide where to locate businesses, how the money can be used, etc., instead of who is sponsoring it.

I know, the public can't understand the details, but they can relate to faces, hence the popularity of Facebook and the need to write about people, not bland tax facts.
*The text quoted has disappeared from the linked web site as of January 19, 2012. Perhaps there was some rights problem, but being paranoid I think it may have been removed to not embarrass Brown. A Google search still turns up references to it from which I've done a screen dump and created a jpeg file to show it existed. 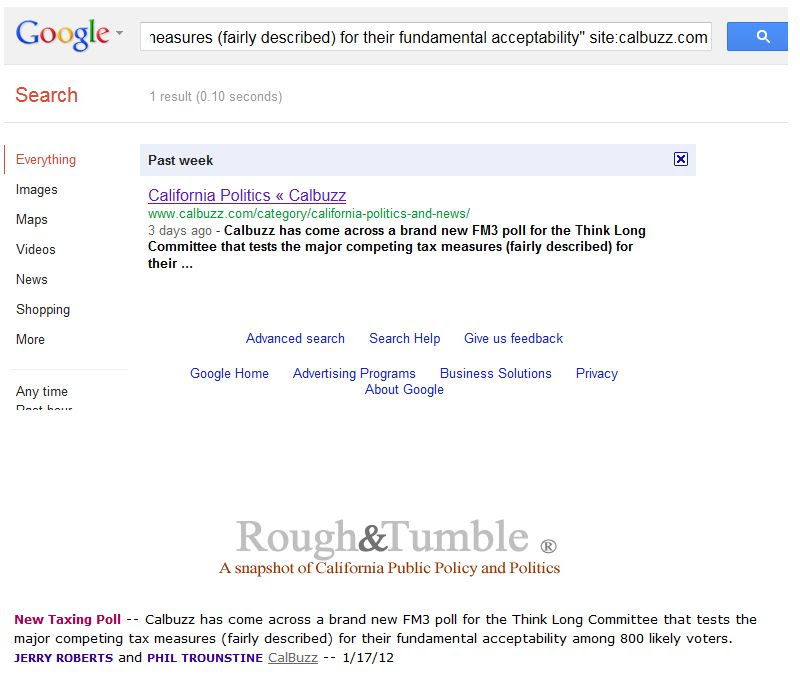