One reason why Californian's have budget problems - everybody else

The following chart has been floating around the internet since 2008. In this blog, the focus is California, so were going to reconsider the data: 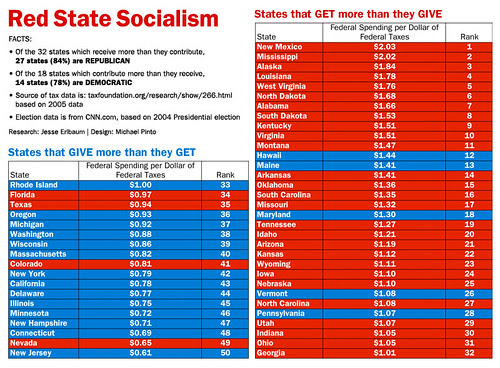 Before commenting on the meaning of this chart, it is important to know that Politifact rates the chart as "Mostly True" explaining:


The graphic’s data uses data from the 2004 election rather than 2008, and the figures on taxes and spending date back to 2005. There are fewer states that would be labeled Republican based on the 2008 election, and there’s a strong likelihood that tax and spending data would have changed as well. Because of this likelihood, we downgrade the accuracy of this generally accurate chart to Mostly True.


[Jesse Erlbaum, the chart's creator,] added, "I've listened to feedback about this chart for a few years now, and folks who don't like the insinuation it makes will always come up with some explanation. Popular ones are that there are more military jobs, more retirees, more farmers, and fewer cities in red states. I don't buy it. Whatever the excuse, the data is clear: These states receive more than they pay in. Everything else is just a rationalization based on someone deciding that one reason for spending money is good, and another is bad. This chart makes no such distinction. I say, ‘Deal with it!’ The facts are the facts."


"Because of the high deficit spending we’re seeing at the federal level, it’s likely that every state is currently receiving more in federal spending than its population paid in federal income taxes," the Tax Foundation's Morrison said.

What we know is that the tax numbers in the chart come from the conservative, business oriented Tax Foundation that regularly tells us California taxes are too high. After downloading the study data, what is made clear in a footnote is the following (emphasis added) and we learn that "Morrison" was just blowing smoke to cover up what the business funded Foundation doesn't want us to know:


* During fiscal years in which the federal government runs deficits some spending is financed through borrowing. This creates implicit tax liabilities for states that must be repaid eventually. To incorporate these implicit tax liabilities into the analysis, the following adjustment was made to state tax burdens: First, the total federal tax burden is increased by the size of the federal deficit. Next, this total burden is allocated among states based on each state's proportion of the actual federal tax burden. Finally, adjusted spending-per-dollar-of-tax ratios are calculated by dividing actual expenditures by the adjusted tax figure, effectively making figures deficit neutral.

What else we do know is that the data available runs from 1981 to 2005 and they ceased providing the data. I may be paranoid, but....

Erlbaum's chart presents the data on a per capita basis. What it doesn't show is the underlying numbers. By downloading the underlying data (in spreadsheet form) from the Tax Foundation, we can discover a number that should be meaningful to Californian's currently fighting over State Government Expenditures and Taxes:

According to the Tax Foundation numbers, in 2005, Californian's incurred a net tax burden to the federal government $47.6 billion - that is, $289.6 billion was extracted out of our economy and $242.0 billion came back into our economy.

According to the business subsidized Tax Foundation data if the federal government would remit all that money to the State General Fund we could easily improve our schools and roads, restore our social and health programs to a desirable level, and cut taxes including eliminating state corporation taxes.

In fact, if the federal government would just send us the net gain of Iowa and South Carolina,  we could avoid considering a tax increase measure in November and still contribute more to other states' economies than any state.

Of course, as we know we and residents of the other states that suffered a net theft in 2005, we victims only have 32 Senators while the thieving states have 68.
Posted by Michael O'Faolain - at 1:31 PM