As I've noted previously, four "tax-the-rich" income tax increase initiative measures have been submitted to the Attorney General to date.

One, which has the advantage of being accurately titled as "Our Children, Our Future: Local Schools and Early Education Investment and Bond Debt Reduction Act", I call the The Activist Heiress's California PTA Supported Proposal to Tax Millionaire Dad & Friends for Schools Initiative.

This proposal might please Warren Buffett who is constantly pointing out that the income of his clerical help is taxed at a rate higher than he pays. Fittingly this measure is being proposed by Molly Munger, daughter of billionaire Charles Munger, vice chairman of Buffett's Berkshire Hathaway.

Munger, a Harvard Law School Graduate who after being a federal prosecutor and a partner in a Los Angeles law firm, became a staff attorney with the Los Angeles office of the NAACP's Legal Defense and Education Fund in 1994. She co-founded and is President of the Board of the non-profit Advancement Project which is sponsoring the initiative.

Her proposal, though legally complex, would:
Monger has won the support of the California State PTA. While it provides for an independent oversight board, the money bypasses the processes controlled by Legislature and the Governor, going directly to the school districts. Naturally, Governor Moonbeam would not support this approach.

In terms of comparing increases in taxes on taxable income to Governor Moonbeam's proposal, here's a comparable chart showing increases including the increased income and current sales/excise taxes (Monger does not propose any sales tax increase): 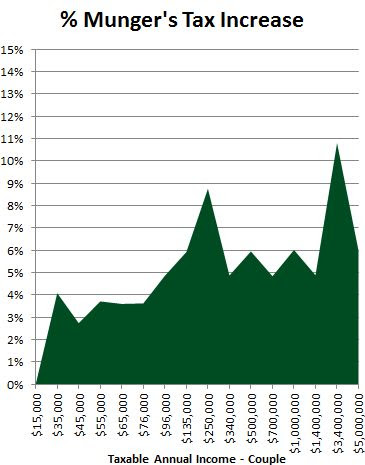 Compare this to the chart I provided in the last post: 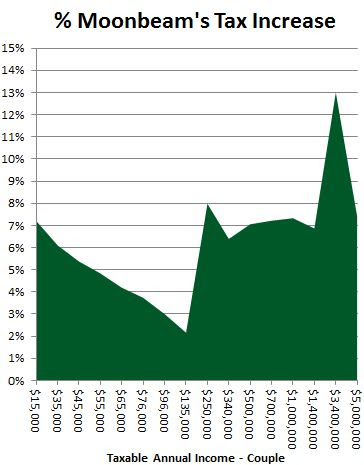 Monger's proposal results in no increased taxes on the lowest taxable income level families while Brown's sales tax increase represents a significant increase at that income level. Also Monger isn't trying to buy votes from the upper middle class, so a couple making $135,000 a years would see a 6% increase in the taxes paid to the State under Monger's plan, while Brown's plan would represent a 2% increase.

In a very real sense, this measure's income tax revenue would have replaced property tax revenue lost to the schools because of Proposition 13. It embraces California's liberal progressive tax trends, but ironically would continue to place education in front of every economic bubble collapse. And, then there is the problem that it would expire on December 31, 2024, making it a temporary, albeit 12 year, fix.

Originally, the proposal would have had the full $10 billion going to education, but in late December Munger submitted a revision that for four years provides relief to the General Fund by using $3 billion to make payments on state bonds, the priority being school bonds. Munger did this to address concerns by Governor Brown, Democratic legislative leaders, and budget "stakeholders." Munger foolishly thinks she can negotiate with these folks to get support for her measure.

A truly simple measure, what I call The Unity High School Senior Class Free Resident Tuition for State Colleges Paid from Tax Increases on Incomes over $250,000 Initiative would increase the income tax rate by 0.7% on annual taxable incomes between $250,000 and $500,000 and 1.7% on annual taxable incomes over $500,000 to provide ree tuition for four years to all California residents at UC and CSU campuses provided that, each academic year he or she maintains a cumulative GPA of 2.7 or performs 70 hours of community service.

While some of the wording might be a problem, it is simple. Whether these kids could get enough signatures to get it on the ballot is questionable.

The measure funds would experience huge variations in taxable income at those high income levels and rates. As I explained in an earlier post an already existing voter approved special 1% tax rate on income over $1 million fell 25% between fiscal years 2007-08 and 2008-09. Since in this tax measure we're talking about around $40 billion, a 25% drop from year-to-year is a rather big number to add to an already extreme economy-vulnerable budget.

Also, it undoubtedly would have a significant effect on choices about residence and business locations made by billionaires. At some point, no one can ignore the fact that deriving income and living within California would be a major sacrifice for anyone potentially making many millions in taxable income. If you were to make $7 million taxable, on the last $5 million you would pay about $800,000 in taxes in California and $0 in taxes in Texas. That would be pretty hard to ignore.

Lastly, there is a targeted income tax initiative which I call The California Center for Public Policy 15% to 25% Extra Personal Income Tax on Annual Pension Income Exceeding $100,000 Derived from The California Public Employees and Teachers Retirement Systems Initiative. It basically reduces pension income for those receiving from the two State pension funds what is considered high pensions.

One has to recognize that there has been some abuse by a few executives in public employment. But the bulk of retired public employees receiving such pensions are physicians, folks with PhD's in fields like physics and chemistry who worked for our universities, etc. There seems to be a bit too much begrudging envy associated with this measure.

But the biggest flaw in the measure is that it doesn't put the money back into the retirement funds to help make them whole. It dumps the money into the General Fund which, at least in many cases, was not the source of the employer's contribution. There, of course, Legislators can use the money to give themselves raises. Not much forethought here.


The press has given the most continuing ongoing coverage to Governor Brown's proposal which has the greatest impact on low income working families, which the press hasn't clearly noted, while at the same time publicizing how his proposed budget cuts will negatively impact these same people. And, of course, we still don't have what I call The billionaire's beauty and barber shop tax proposal.

What will happen next is anybody's guess. More on that in a later post.
Posted by Michael O'Faolain - at 10:02 PM