A New World View: As of 2021 the Indo-Pacific has displaced the Atlantic as the world economic center 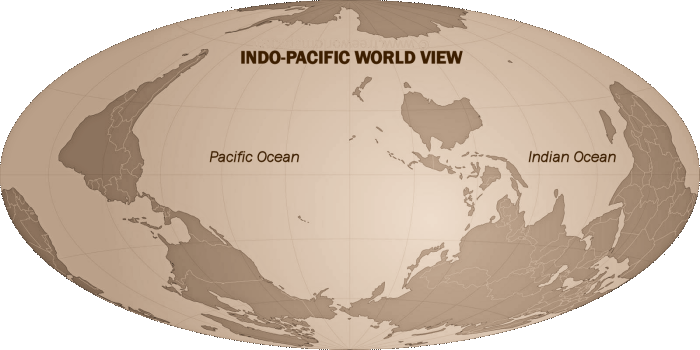 Embracing the Indo-Pacific in the 21st Century

Fourteen years later, that new world view has gained broad acceptance including the United States. On May 30, 2018, Defense Secretary Jim Mattis announced in Hawaii that the Pentagon was changing the name of the Pacific Command to the U.S. Indo-Pacific Command.

With the USS Arizona Memorial behind him, Mattis said:

For U.S. Pacific Command, it is our primary combatant command, it's standing watch and intimately engaged with over half of the earth's surface and its diverse populations, from Hollywood to Bollywood, from polar bears to penguins as Admiral Harris puts it.
Having grown up in Washington state, one of five American states with Pacific Ocean coastlines and looking out the plane's window yesterday coming across that vast expanse of ocean, in my flight here I was reminded that the United States is today and has been for two centuries a Pacific nation.
Further, in recognition of the increasing connectivity, the Indian and Pacific Oceans, today we rename the U.S. Pacific Command to U.S. Indo-Pacific Command. Over many decades, this command has repeatedly adapted to changing circumstance, and today carries that legacy forward as America focuses west.

Despite beliefs by some that the United States is the dominant nation of the world, it is not. It is one nation among the 200± countries. Since WWII the U.S. has  lost wars in Korea, Vietnam, Afghanistan, and Iraq. Because of WWII, the U.S. was economically dominant for about 60 years. But since 2001, that situation has changed.

It is not that we do not have the preeminent military by 20th Century standards. It's just that the measurement of national strength is, and always has been, a strong economy. The Indo-Pacific Economic Corridor was recognized in the US-India Strategic Dialogue of 2013 by then Secretary of State John Kerry. In the future, pivotal technological decisions will not be made within a single national economy and it is likely that income distribution across the world will tend to become more egalitarian - except for that top 1% (or 10%) the existence of which is a source of complaints even in "communist" China.

Earlier this month in this blog the pandemic-related container-ship traffic jam off California’s coast was noted. This past week we followed the story of a massive container ship that became wedged in the Suez Canal and cut off traffic in the vital waterway for almost a week. The problem, of course, is that shipping is used to support a supply chain that has little room for delays which can create huge increases in costs.

Unacknowledged in a straightforward way is the complete flipping of humanities' economic view of the world. Yes, some focus on the idea of an Indo-Pacific oriented map was first presented here in a May 31, 2016 post Sanders and Trump to destroy Pacific Rim states of California, Oregon, and Washington which did emphasize: "We of California, Oregon and Washington ought to fear the Bernie/Donald Atlantic-Eurocentric world view. Our view of our western border, the Pacific Ocean, has nothing in common with what is experienced in New York or Vermont - or even Michigan or Florida - and that difference is threatening our economic well being."

But the map above offers not only a Pacific and Indian Oceans focus but a flipped image, a graphical revision of how we traditionally see our world to create an understanding that the Eurocentric world of 2nd Millennium AD is being replaced by an Indo-Pacific World View. 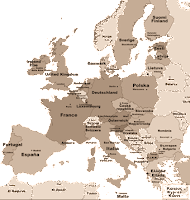 Europe, particularly Great Britain, was home to the Founding Fathers of the United States. Mental images of the world were based on maps that were focused on the Atlantic. The economics from that time until the mid-20th Century depended on relationships with European countries.

But that is not the Indo-Pacific World View.

Since the 21st Century numerous writers have begun to explore the nature of the new world view in terms of what it means. In an article in a 2019 edition of Journal of Indian Ocean Rim Studies, “The ‘Indo-pacific’ Idea: Origins, Conceptualizations and the Way Ahead”, Captain Khurana explained:

Notably, in the past half-century, it is not only China and India, but also the other countries in the entire swath of the Afro-Asian rimland and Australasia that have developed more rapidly than the rest of the world and are still rising. The GDP of the countries in merely in the maritime underbelly of Asia is poised to surpass 50 per cent of the global GDP, much sooner than what was predicted in the 2011 ADB Report. An analysis indicates that the combined GDP (PPP terms) of the 36 countries of =maritime Asia‘ already constitutes 48 per cent of the global GDP (2017). For the 62 Indo-Pacific countries of the Afro-Asian rimland—including Oceania—the proportion is 51.5 per cent. Furthermore, all 74 countries of the wider Indo-Pacific region (inclusive of the Americas) contribute to nearly 72 per cent of the global GDP. This indeed makes the "Rise of Indo-Pacific‘—rather than the "Rise of Asia‘—a more appropriate maxim.

The recognition of this underlies the following map: 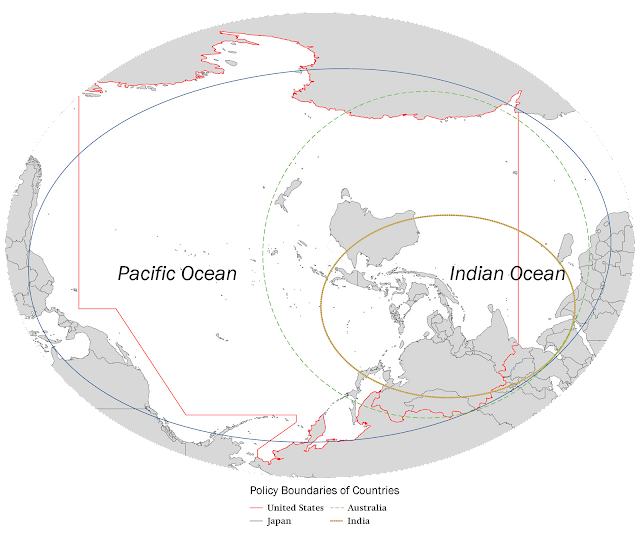 In each case, the indicated policy boundaries were derived from official sources. In the case of the United States Indo-Pacific Command, the area encompasses more than 100 million square miles or roughly 52 percent of the Earth's surface. If you add to that the remainder of the area shown on the map, you have nearly 70% of the Earth's surface. If you include the west coast of the Americas and the east coast of Africa, you have nearly same percentage of the Earth's human population.

All this leads to the critical question: What international collision, deliberate or otherwise, could result from this reorientation of the world view?

It needs to be made clear to all Americans that within the United States political power structure it was the military that first shifted its focus from NATO to the Indo-Pacific over a 30-year period.

And it is no accident that Steve Bannon, who as an officer in the United States Navy served on the destroyer USS Paul F. Foster as a surface warfare officer in the Pacific Fleet and then served as a special assistant to the Chief of Naval Operations at the Pentagon, in a March 2016 discussion with Neoliberal Lee Edwards of the Heritage Foundation stated:

We’re going to war in the South China Sea in five to 10 years. There’s no doubt about that. They’re taking their sandbars and making basically stationary aircraft carriers and putting missiles on those.

While Bannon does not make foreign policy for the U.S., he does reflect an attitude found among many former and current military officers and a surprising number of State Department employees.

In 2005 Robert Kaplan wrote a long article in The Atlantic How We Would Fight China which extensively explains the complex world economic situation at that point in time, before the Indo-Pacific World View was acknowledged. However, in 2013 China introduced its Belt and Road Initiative, a global infrastructure development strategy to invest in nearly 70 countries and international organizations. It's most significant effort to date involves lending through the Asian Infrastructure Investment Bank: 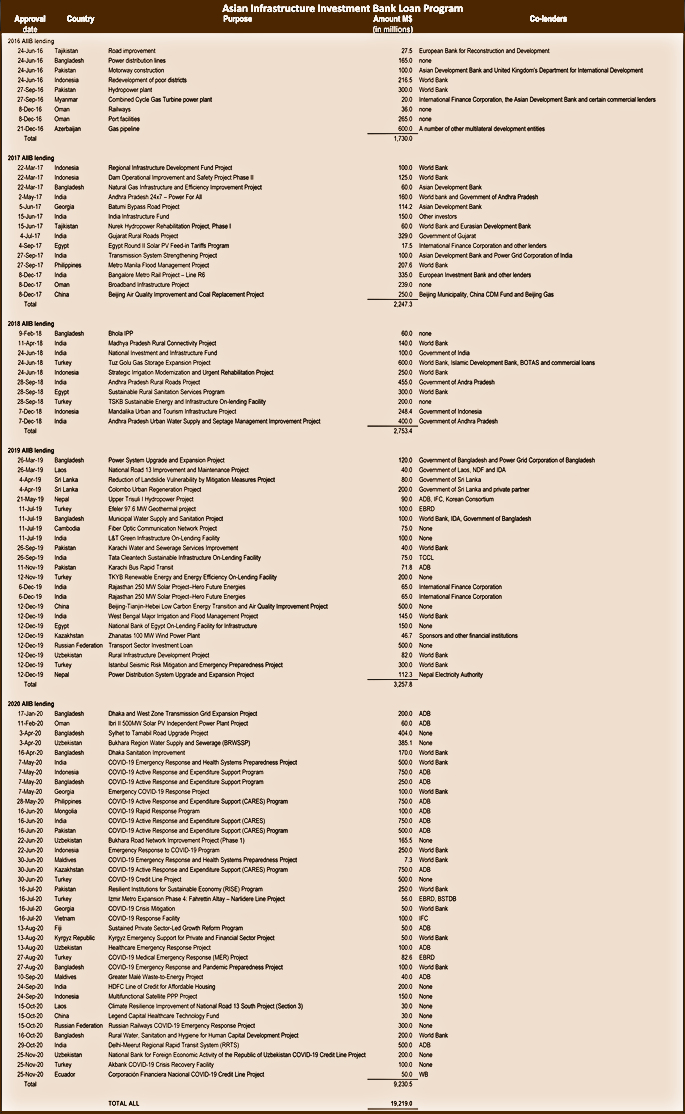 The formal shaping of both U.S. foreign and military policies was noted in The Contested Framing of the Indo-Pacific:

Alongside the economics-driven rationale for this framing, there was an omnipresent geopolitical element in the Indo-Pacific framing, whether as text or subtext. This too is hardly surprising: the US “pivot to Asia” was a signature foreign policy move under the Obama administration in 2009. The “pivot” featured trade (Trans-Pacific Partnership) and military (Air-Sea Battle doctrine) components, both aimed at containing China. This latent or veiled conflict invoked by the geopolitical element in the Indo-Pacific framing came out into the open with the Trump administration’s promotion of the “free and open Indo-Pacific” in the 2017 US National Security Strategy. Hardly surprisingly, China reacted negatively, with Foreign Minister Wang Yi calling the Indo-Pacific framing an “attention-grabbing idea” that “will dissipate like ocean foam.”

With that said, it is the "economics-driven rationale" that has resulted in the evolution of the Indo-Pacific New World View while many, maybe most, Americans weren't looking. In the 45 years since the death of Chairman Mao, China has developed an economy that in total purchasing power exceeds that of the United States albeit China's average per capita income is still well below the United States.

This has left the U.S.with a substantial trade deficit most significantly because of trade with China. But that is becoming more complicated. In a well-written article by Bill Knighton, president of RightAngle Products, How the US Lost Most of its Manufacturing, published in January 2018, you can learn how and why over 60 years the American economy shifted to a service economy dependent upon imports. 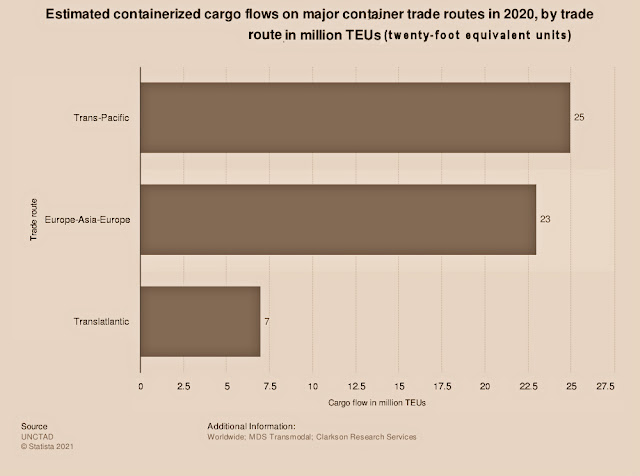 Understand that the Trans-Pacific shipping of 25 million TEU's equals 300 million tons. We all should get an idea of the value of the huge volume of imports to the United States as shown in this 2019 chart:

It is admittedly hard to visualize physically what this shipping means. We do have a graphic available that gives a feel for the activity involved, but it is based on 2012 information and we have likely seen as much as a 40% increase in shipping. Nonetheless, it does give one a feel for the traffic:

You must click the "-" and drag the map to see what shipping was like in the Indo-Pacific. Then assume a 40% increase, certainly some from larger ships but also some from more ships.

Finally, the reality of the United States looks like this map which hasn't been inverted: 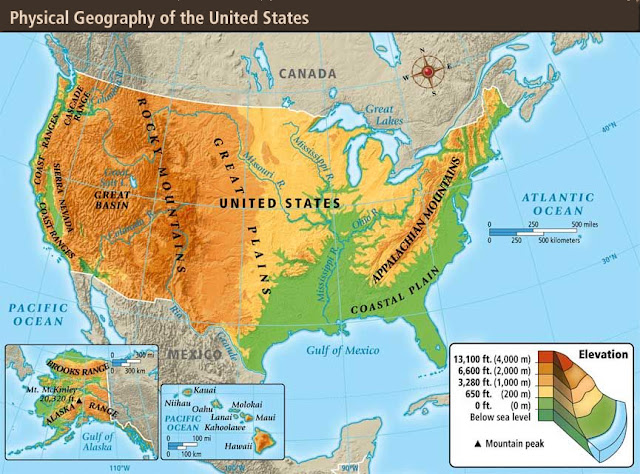 As noted in the beginning above, retired Four-Star Marine General and then Defense Secretary Jim Mattis, a native of Washington State, noted that five of the 50 American states have Pacific Ocean coastlines. The United States is an unnatural Union that offers access from East Asia and Southeast Asia to Trans-Pacific shipping at ports in Los Angeles, San Francisco, Portland, and Seattle, all thousands of miles from population centers on the Eastern Coastal Plain.

The U.S. East Coast views the Atlantic looking east to Europe. The U.S. West Coast views the Indo-Pacific to the west. These offer radically different cultural views. By the end of the fourth millennium BC, both China and India had emerged as regions of highly developed civilizations.