Having said innumerable times over the decades "figures don't lie but lairs sure can figure" it seems like reading, seeing, and hearing inane reporting on statistics in the news media should not be bothersome.

After all, clearly embedded in the term is the truth of its history - stat istics - as the term is intimately connected with the development of the modern sovereign state, specifically within European states following the peace of Westphalia (1648).

If you didn't know it, scholars have recognized the Peace of Westphalia as the origin of principles crucial to the concept of the modern self-governing independent nation, including the inviolability of borders and non-interference from outside the borders in the domestic affairs states.

It shouldn't surprise anyone that statistics, a mathematical science grounded in probability theory, became a tool for elected politicians. Statistics can be confusing for we non-statisticians, even those of us who took a statistics course in college.

For instance, last Thursday the U.S. Department of Labor reported 1.186 million new initial unemployment insurance claims for the preceding week. While that is a number that needs no interpretation, we can learn that the normal weekly initial unemployment insurance claims in 2019 was 200,000-250,000. That range extended into early March as can be seen on the chart below (numbers are in thousands, so the first number is 211,000 and themost recent is  1,186,000):

Again, these are just numbers. If you total the numbers shown on the graph, the reported weekly initial unemployment insurance claims during this period is 55,814,000 - yes, 55.8 million!

Again, these are just numbers. But the news media can't just report the numbers - that's just boring news. So on July 16 CNBC reported that the continuing claims as of July 4 were 17.3 million as asserted by the Federal Reserve Bank of St. Louis. Then on July 24 The New York Times headline was About 30 Million Workers Are Collecting Jobless Benefits explaining that "the Labor Department reported that the total number of people claiming unemployment insurance for the week ending July 4 — without any seasonal adjustments — equaled 31.8 million."

For this writer, this kind of crap reporting is unacceptable albeit it has been the new normal for decades. Those continuing claims numbers don't seem to be included in news stories about real people nor by this writer's personal knowledge, albeit both are anecdotal. IF we join in these speculative games, even if 20% of those initial claims numbers include errors, false claims, and people who have returned to work, the continuing claims today would be 44.7 million. But I certainly wouldn't pretend to report that to the public as news.

A paranoid political junkie might even suspect that the stat istics might be being used for purposes of the state. And the headline news last Friday would reinforce that view. We were told that the U.S. Bureau of Labor Statistics (BLS) reported that 16.3 million people were unemployed in mid-July making the official unemployment rate for mid-July 10.2% down from its peak in mid-April. The implication is that 68.5% of those that filed between March and July went back to work!

Wow! Things are really looking up! But wait! What is the U.S. Bureau of Labor Statistics (BLS). It even has stat istics in its name.

If one digs down ever so slightly one learns that the headline BLS unemployment rate is the "U-3 rate." It turns out that the BLS has a broader "U-6" measure of unemployment, which includes such people as those working part-time but not of their volition and people who have given up, is at 16.5%. In fact, there are rates labeled U-1 through U-6, all of which are reported in a table (but not in headline news) as follows: 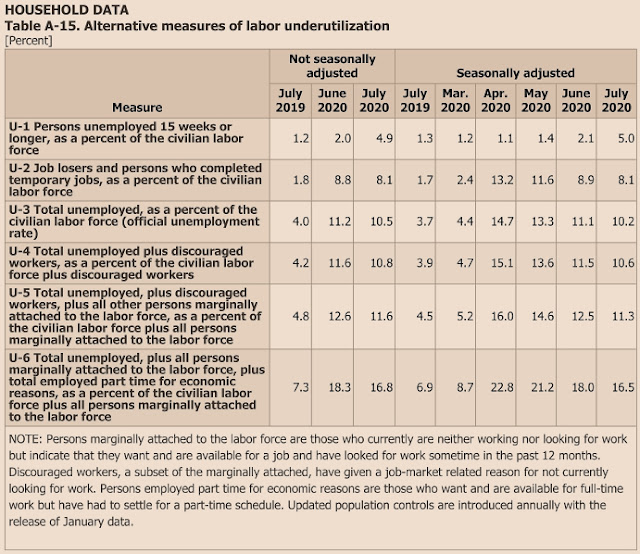 In the 12 months before the pandemic, the BLS household employment survey had a response rate of 83%. The July survey had a response rate of 67% which should make one wonder if they didn't get an adequate response for statistical probability analysis. But these folks are statisticians whose data could be useful for government planning. Unfortunately, it is useful for politicians who over the years have made sure the news media get the statistics.

As noted earlier, the anecdotal information available indicates a whole lot of families (aka households) have seen their wage-earner members lose their jobs. Lo and behold, another federal agency, the Census Bureau, in a Household Pulse Survey found last week that found that 50.8% of adults live in households that "experienced loss of employment income since March 13, 2020 (for self or household member)" and 26.5% of surveyed adults either missed their last rent or mortgage payment or have either slight or no confidence they can pay the next one.

According to the Census Bureau, in collaboration with five federal agencies the Household Pulse Survey was designed to deploy quickly and efficiently, collecting data on a range of ways in which people’s lives have been impacted by the pandemic. Data will be disseminated in near real-time to inform federal and state response and recovery planning. But keep in mind that it is a "survey" which like other "polls" has a limited number of responses (typically 80,000±).

Many news articles now assert we're in a depression. The problem with that is there is no definition of a depression based on statistics. Other articles and government agencies say we are in a recession based on statistics. Unfortunately, they are really asserting that the data indicates a probability of an event something like the recessions since WWII for which they have data. As asserted here in prior posts, that is incorrect. We don't know what's going on and have chosen to call it The Great Economic Distortion of 2020. 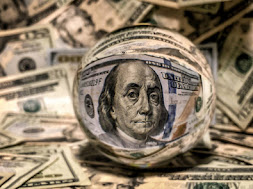 So what seems likely about The Great Economic Distortion of 2020? It appears a large number of households have seen a drop in income during the pandemic. That is because since the since April at any one time a significant percentage of Americans of working age who wish to be participating in the work force are unemployed or significantly under-employed.

Keep in mind that the economic impacts of the pandemic began in mid-March and the data is for mid-July, a mere 4 months. At the beginning of The Great Depression, the stock market crash was in October 1929 but unemployment did not hit double digits until the end of 1930.

As noted in a previous post, the effects of a crippling world-wide pandemic have not been experienced since modern economic statistical data, such as unemployment and GDP, began to be systematically compiled on a regular, standardized, though on occasion revised, basis after World War II.

Given that the United States was considered the world's economic leader from 1946 through 2016, it is clear that life for people around the world is about to begin a significant long-term change with no model to emulate.

China's 4000+ years history of empires created its peculiar civil perspective. The traditional Chinese form of national government has been an oligarchy with a touch (sometimes a heavy hand) of autocracy led by an emperor or, since the middle of the 20th Century, a paramount leader. It's culture is built around one ethnic group. Fundamentally the autocratic state controls the economy. It does not offer others an appealing road to follow.

In contrast the United States is a country that has existed less than 250 years. It claims to be a democracy. Two of the last three Presidents lost the popular vote but were appointed to office. The U.S. Senate majority was elected by less than 8% of eligible American voters. Together they have secured control of the Supreme Court. The truth of the matter is the U.S. form of national government has been an oligarchy with a touch of autocracy. Fundamentally, state-favored organized greed controls the economy. Because it's population is ethnically diverse, it has no stable culture. It does not offer others an appealing road to follow.

The most significant challenge facing humanity over the 21st Century is Climate Change. International action is needed to address the multitude of problems. The Great Economic Distortion of 2020 will make it more difficult. It appears that no single influential or powerful leader is likely to step forward.