California Democrats offer leadership on equity goals and anti-bigotry. As expected the Trump team is attacking Harris by attacking California.

The selection of Kamala Harris as Joe Biden's running mate offers real hope for a return of the Democratic Party to a focus on achieving equity goals through focused legislative and administrative actions.

Because of the domination of political rhetoric by ideologues and populists who like to talk at the expense of achievement, I have no idea what it means to be a "progressive" or a "liberal" in these times.

All I know is that I have always identified as a "California Democrat" with a clear understanding of what that means. It begins with a clear understanding that the endemic racial, ethnic, class, religious, ideological, and nationalist bigotry in the United States must be eliminated as that bigotry interferes with the achievement of equity goals. "Equity goals" were always clear in my lifetime, derived from the Franklin Roosevelt Administration's New Deal as expanded upon by Harry Truman's Administration's "Fair Deal" through Lyndon Johnson's Administration's Great Society:

Harris has been part of the continuing struggle by California Democrats to achieve those goals including eliminating the end of bigotry. Because of what has been achieved in California despite our many failures and restarts, Donald Trump's campaign team has already begun to attack Harris for being a California Democrat. Simply they can attack Harris based on her Senate voting record which reflects her commitment to equity goals. 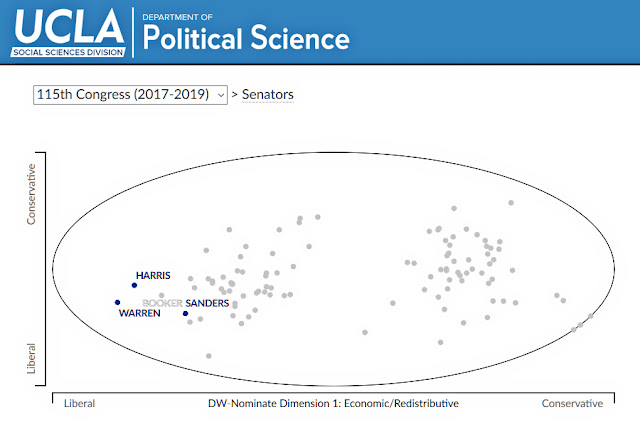 The chart above reflects the voting records of U.S. Senators during the 2017-2019 session on bills that would result in more economic equity within the United States. Assuming that Bernie Sanders reflects some sort of "gold standard" of "liberalism" As can be seen, three Senators measured more liberal than Sanders and only Elizabeth Warren's voting record was more liberal.

While I would like to say Californian's unequivocally support equity goals and oppose bigotry, that is a false idea. Consider two examples. 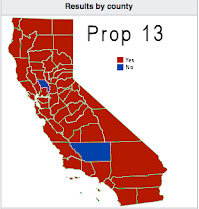 In the early 1960's, Governor Pat Brown established what was essentially tuition-free college in California while increasing funding for K-12 education. That was expensive and relied heavily on property taxes for funding. In 1978 Californians voted overwhelmingly for Proposition 13 which basically defunded tuition-free college. Kamala Harris was 14 when that happened, well before she became an effective politician. Today, as we can see from the chart above, she advocates for equity goals though political risk can arise from that advocacy even within California.

Harris has a solid record challenging bigotry even when bigotry was clearly supported by the majority of voters. 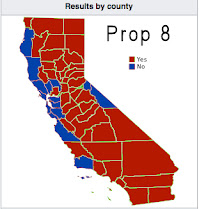 In 2004, then San Francisco Mayor Gavin Newsom with the assitance of Kamala Harris performed same-sex marriages in his city, which were subsequently judicially annulled. This case, and some others, eventually led to a decision announced on May 15, 2008, of the California Supreme Court, which by a 4-3 vote struck down Proposition 22.

On November 4, 2008, Proposition 8 "Eliminates Right of Same-Sex Couples to Marry" was approved by the voters. The measure was challenged in federal court as unconstituional. In 2013 as the measure made its way to the U.S. Supreme Court, then California Attorney General Kamala Harris refused to defend the measure stating "It's well within the authority vested in me as the elected attorney general to use the discretion of my office to make decisions about how we will use our resources and what issue we will weigh in on or not."

As you can see from the maps above, California's voters do not have a consistent record regarding equity goals or anti-bigotry. Yet strangely, we keep electing politicians like Harris who methodically lead us towards those objectives. It takes considerable courage to provide that kind of leadership.

This is why as a California Democrat one easily can support the Biden-Harris ticket.
Posted by Michael O'Faolain - at 2:46 PM