In the midst of the Covid-19 pandemic, this writer is suffering from news coverage about California. Unfortunately, what Donald Trump calls the "fake news media" is living up to his description. So for the record here is the truth. 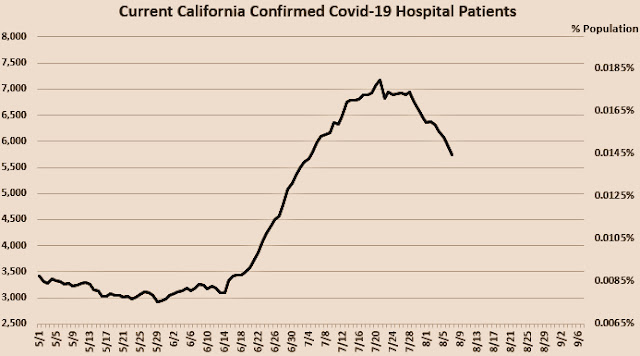 The graph above indicates a remarkable success by California state and local government dealing with the pandemic. On March 19, 2020, California Governor Gavin Newsom issued the state's initial "stay-at-home" order in light of modeling by experts indicating numbers that would require nearly 20,000 more hospital beds than the state could provide if no action were taken. The day before, Newsom sent a letter to President Trump stating as follows:


I write to respectfully request you immediately deploy the USNS Mercy Hospital Ship to be stationed at the port of Los Angeles through September l, 2020, to help decompress our current health care delivery system.
This resource will help decompress the health care delivery system to allow the Los Angeles region to ensure that it has the ability to address critical acute care needs, such as heart attacks and strokes or vehicle accidents, in addition to the rapid rise in COVID-19 cases. The population density in the Los Angeles Region is similar to New York City, will be disproportionately impacted by the number of COVID-19 cases.

In explaining the high number of case projections, Newsom explained: "The point of the stay-at-home order is to make those numbers moot." He noted: "We are confident that the people of the state of California will abide by it, will do the right thing."

Around the end of May, Newsom began the process of lifting some of the pieces of the stay-at-home rules. As expected, hospitalizations climbed dramatically while state and local government attempted to tweak the lifting of the rules. As can be seen in the chart, by the third week in July, the number of persons infected with Covid-19 in hospitals peaked and is declining almost as dramatically as it climbed.

And yet, none of this is discussed in the news media.

What you may see is that California has more cases or increasing daily deaths or such other headlines. California does have more cases than any other state. Of course, California does have about 33% more people than Texas, the next largest state, and double the population of New York. One other way to view the case numbers is to note that California ranks 22 among the 50 states in cases per capita and 28 among the 50 states in deaths per capita. 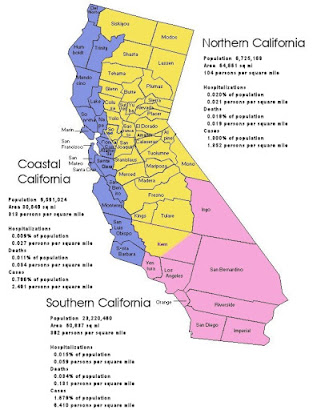 As some may be aware, for two decades this writer has advocated dividing California into three states as indicated in the image to the left. The statistics in the image indicate why. (Click on the image to see a larger version.)

What this writer cannot help but note is the while Coastal California would be the 11th largest state, it would rank 41 in per capital cases and 43 in per capital deaths.

I believe that despite the fact that parts of the San Francisco Bay Area have a large highly dense population, the folks in Coastal California have a stronger sense of "social compact" leading them to, as Newsom said, "do the right thing."
Posted by Michael O'Faolain - at 2:31 PM