As Democrats practice missteps, the Koch's shun Trumpist thought by funding social and education programs to improve civil society for all Americans

So Democrats started running for President 650 days before the 2020 Presidential Election and the clock now indicates...

...which is plenty of time to make serious misstatements and misjudge what will be the major problem facing the nation six months (180 days) before the election.

Donald Trump is stuck in that situation - he has to make comments, on whatever, all the time.  Democrats don't have to start this early, but apparently they will anyway.

In the meantime, the Koch Neoliberal organization has backed away from the social policy right wing which is the Trump base. Instead, we have the Koch organization beginning in 2017 in a partnership with former NFL star Deion Sanders to tackle poverty by addressing chronic joblessness, educational failure, addiction and trauma, personal debt, and breakdowns in the family structure. 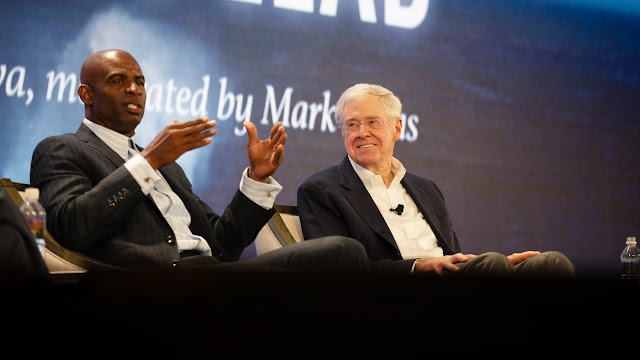 Then we had the successful effort at the federal level to achieve legislation to implement a sweeping overhaul of the criminal justice system explained by Obama’s green jobs czar and liberal activist Van Jones and Koch Industries general counsel Mark Holden:

The point of this post isn't to create huffy arguments over the Koch's policy orientation. There is no doubt they are Neoliberals who believe and advocate for economic deregulation, tax cuts, free trade, a more open immigration system, and deficit reduction. At this year's Indian Wells meeting, according to the Post story they outlined 10 “barriers” preventing people from realizing their full potential: bad fiscal policy, overregulation, cronyism, joblessness, a failing education system, persistent poverty, counterproductive immigration policy, free speech restrictions, a broken criminal justice system and tariffs.

In pushing policy, the Koch folks focus on the states, and then the U.S House of Representatives, maybe. President? Well, if policy is what you're interested in, Presidents come and go and with them Executive policies come and go. Just ask Barack Obama. In state government, on the other hand....

So it appears the Koch Neoliberal organization will leave the whole Presidential election debacle up to the Democrats and Trump.

There are no comparable Progressive organizations advocating policy in middle America. Democrats like the concept of national celebrity. And so the Democratic candidates for President are forging ahead.

Perhaps they have reviewed the results of the past three Presidential elections...or maybe not. Maybe they listen to one pundit or another. That's not a way to win.

As noted by one Neoliberal pundit:


And while character and culture will be a big part of the upcoming campaign, elections are also about policy. Maybe not about the nitty-gritty details of 25-page white papers, but about the broad strokes of where candidates want to take the country. And unfortunately for them, the Democratic contenders are not offering an attractive policy vision.
It’s an agenda not just for big government, but for gigantic, enormous, jumbo, super-colossal government. In fact, the rapidly growing Democratic field has collectively moved so far to the left that it is about to fall off the edge of the political charts.

Another pundit offers a different take:


In reality, the American public is closer to being “socially conservative and economically liberal” than the reverse.
On the socially conservative part: More than half of Americans say they pray daily. About 53 percent say abortion should be legal either “only in a few circumstances” or never. Almost 70 percent say illegal immigration is a “very big” or “moderately big” problem. On some of these subjects, the answers can depend on the precise phrasing of poll questions. But you have to twist the data pretty hard to create a portrait of a secular, liberal majority on most social issues.
Economic policy is very different. Large majorities of Americans oppose cuts to Medicare and Social Security and favor expanded Medicaid. They favor higher taxes on the wealthy and corporations. They favor a higher minimum wage and more aggressive government action to create jobs. No wonder: Incomes for most Americans have been growing painfully slowly for most of the past four decades.

To win the Presidency in 2020, the message must appeal to the majority of voters in Ohio, Indiana, North Carolina, and Florida.

If you are a Democrat you'll get the normally blue states but you must win the majority of voters in Ohio, Indiana, North Carolina, and Florida. If you lose all four of those states, you'll likely lose enough more states to make certain you won't win the Presidency.

And if you're a Democrat actively running right now, like Trump you'll have endless opportunities to inadvertently alienate unknown number of voters in Ohio, Indiana, North Carolina, and Florida. A good example is the Medicare-For-All trap that Kamala Harris fell into this week.

As Ocasio-Cortez et al. would tell you the Kaiser Family Foundation poll last week found that 56 percent of respondents said they favored “a national plan called Medicare for All in which all Americans would get their insurance through a single government plan.”

What Ocasio-Cortez et al. would  not tell you is that when it was explained to the respondents that under Medicare for All private insurance would be eliminated 37 percent of respondents favored it, and 58 percent opposed it.

And no candidate knows what the flash point issue will be in mid-2020.

Right now the Democratic candidates are focusing on Iowa, South Carolina, and a bunch of other states that are very unlikely to go blue in the General Election. That's because the Democratic Party has created a system that requires candidates to win primaries in states that rearely go blue.

Here in California, we will go blue but what does it matter if the Democrat loses Ohio, Indiana, North Carolina, and Florida?

Hopefully, the Koch organization will back some policy I support. Because they are correct to think the Presidency is the least important part of government in these United States. Unless, of course, we find ourselves in a war....
Posted by Michael O'Faolain - at 4:16 PM