One of the more frustrating things about being a Californian familiar with his state and its history is the sheer hubris of claims made by those living East of the Rockies and the degree to which those claims became the untrue truths of United States - myths, really - way, way before there was a Donald Trump.

One of those frustrations is associated with the mythology surrounding Thomas Edison. As noted in Wikipedia: "Edison's major innovation was the establishment of an industrial research lab in 1876." Simply put, Edison became a successful businessman who by 1911 brought all the companies he had started as a result of his industrial research operations together into one corporation, Thomas A. Edison Incorporated, with Edison as president and chairman.

My frustration is not about businessman Edison and his successes and failures. The frustration is that 99% of Americans do not recognize the name Joseph Neri.

On the evening of July 4, 1876, termed "the grandest day San Francisco had ever seen", Neri pulled a lever while standing on the top of St. Ignatius Church and the streets of San Francisco were lit with electricity for the first time.

The results of Neri's efforts were noted in the San Francisco Chronicle:


San Franciscans, ever on the vanguard of change, quickly went to work lighting the city. Three years before New York City's streets were lit by Edison, the California Electric Light Company opened a power station next door to St. Ignatius. The station provided electricity to San Francisco's first electric street lamps in 1879 and, by year's end, to the Palace Hotel and California Theater. What began as an experiment by a Jesuit priest had transformed the city.

That last sentence explains my frustration. The first Jesuit priest to be ordained in California, Father Joseph Neri, in 1869 went to work at St. Ignatius College (now known as the University of San Francisco). The following year he was appointed chair of the natural science department. And Neri went on to light San Francisco.

Neri wasn't a businessman, he was a scientist working for a non-profit educational institution, the kind of place and type of person that gives away wealth-creating knowledge. 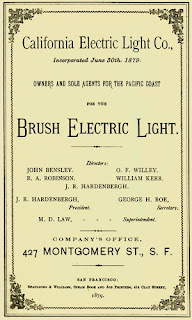 And so the Jesuit Priest scientist, Fr. Joseph Neri, became a footnote in American history - well, a footnote only in some kind of extensive technology history book.

On the other hand, businessman Thomas Edison began appearing in popular culture as a character in novels, films, comics and video games. He and Henry Ford became friends and neighbors. When he died in 1931 Edison left property worth $12,000,000 in 1931 dollars. And too many Americans think he invented electricity.

I only note all this because in the midst of all the wildfire and related PG&E bankruptcy news the first comprehensive and well-written article Frayed Wires: As California enters a brave new energy world, can it keep the lights on? appeared today which ties together the complex 21st Century future evolution of the electric power system as it moves away from the 19th Century grid model.

The story only briefly mentions the historical fact: "After all, the first electricity grid was built in San Francisco in 1879, three years before Thomas Edison’s power station in New York City. (Edison’s plant burned to the ground a decade later.)"

The extensive article is focused on the future, noting:


So getting to California’s new goals of operating on 100 percent clean energy by 2045 and having 5 million electric vehicles within 12 years will require a shift in how power is acquired and managed. Consumers will rely more heavily on stored power, whose efficiency must improve to meet that demand.
“Large-scale renewables are disrupting the conventional paradigm of how the grid has been constructed,” said Lorenzo Kristov, who is retired from a long career designing markets and planning the state’s grid. “Wind and solar—you can’t tell them what to do. They are challenging just about every aspect of how the electricity system has worked for decades. We need a lot of new thinking.”
As California chews on the problem, other states and even the federal government are watching—as they do many developments that emerge first in California—to see what arises.

Perhaps, on occasion as the extensive experimentation and research moves forward making newly minted mbillionaires someone will remember Fr. Neri even though getting rich was never a part of his big picture.

And perhaps Californian's will begin to understand that PG&E's electric business today includes only purchasing electricity from others and distributing it to us ordinary folks - a business model that may have no long-term future.
Posted by Michael O'Faolain - at 2:27 PM