Tariffs: Trump's excise tax to be collected soon from his deplorably unknowing fans 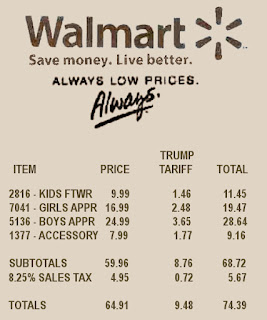 A "tariff" is a tax on what you buy, not a war against China, Mexico, Canada, and the European Union. The use of the word "tariff" is a good way to hide a tax.

When a 25% tariff is collected on a product entering the country, that increases the wholesale price by 25%. Importers pay U.S. import tariffs to the federal government and the cost is passed on through the wholesaler and retailer.

This is similar to an excise tax which, as explained by the Tax Foundation, are "included in the final price of products and services, and are often hidden to consumers." But one doesn't have to take the word of experts on such things or some "fake" news source.

It was two years ago this month that Trump started bantering around the phrase "trade war" in a speech in Monessen, Pennsylvania. There he threatened Canada, China and Mexico.

And it was there that he made it clear he intended to use taxes Americans would pay to benefit some American businesses stating: "Our original Constitution did not even have an income tax. Instead, it had tariffs emphasizing taxation of foreign, not domestic, production."

The problem with that, of course, is taxes (tariffs) on imports don't tax "foreign production", they tax domestic consumption - you pay the tax. When a 20% tariff on imported goods is collected at the American port (not in the foreign country), the wholesale price of those goods is increased 20%. Now, perhaps the cost of Apple products depicted at the right above might not be increased the full amount of the tariff as Apple's retail markup is extremely high and they could afford to absorb some of that tariff cost.

But consider the hypothetical Walmart receipt depicted at the left above. In all likelihood a person buying clothes for their kids which would have cost $64.91 including sales tax would cost an additional $9.48 which represents about a 15% tax paid to the Trump Administration. And that's also true of stores like Macy's and Costco.

Of course, Costco members are considered wealthy, or "affluent", with only 15% just "getting by" or "poor." The average Costco member is college educated, owns a home and earns about $100,000 a year, while Walmart caters to low-and-moderate income families.

As noted in Wikipedia, tariffs "were the greatest (approaching 95% at times) source of federal revenue until the Federal income tax began after 1913." Before Trump's new tariffs, existing federal taxes on imports contribute $44 billion to the federal budget. It is unclear where to even start to calculate how much of his personal income tax cut will be recovered from consumers through increased tariffs.
Posted by Michael O'Faolain - at 10:36 AM