Windfarms 5, Gray Whales -? The Ocean is being sold to private interests who will sell you electricity. 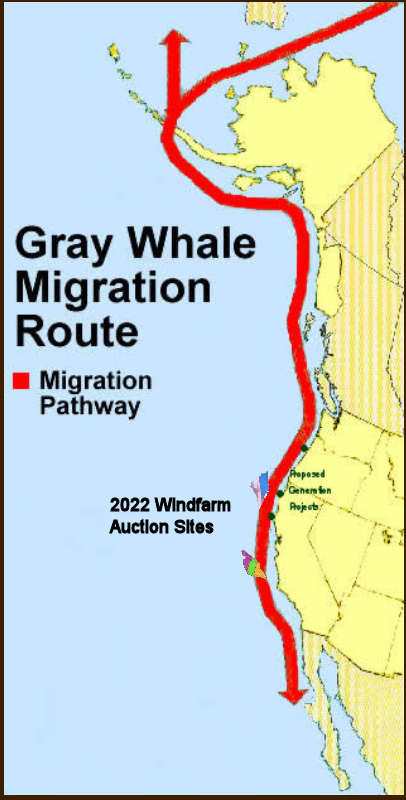 Fifteen years ago I began this blog. The concern was that government was going to lease California's ocean to corporations to develop alternative electrical energy sources.

On Wednesday, August 1, 2007, the first post in this blog Limited Time Only - Act now to own your piece of the Pacific Ocean off the Mendocino Coast was offered. It addressed a plan to use "wave energy" generation systems to be placed in the Gray Whale Migration Route. In February 2012 an extensive post about the matter -The Cloud versus the Gray Whale - was offered.

The proposal disappeared from the news, much to my surprise. But guess what. Wind farm proposals were always on the horizon.

Wind farms have been constructed along the Atlantic Coast. And as posted here May 29, 2021, Gray Whales threatened as Biden and Newsom push huge Pacific Coast wind farm developments.

Several dozen companies are competing today for leases to build massive floating wind farms in deep ocean waters off Morro Bay and Humboldt County. The auction is the first major step toward producing offshore wind energy off the West Coast.

If you read the article you will learn that environmental opposition has been pushed aside in favor of economic expansion - in other words, electric energy for a constantly expanding world economy is all that really matters. Simply no one wants to give up electric devices including future electric powered modes of transport.

The fact is that very, very large wind generators are planned to be built This writer is of a generation that isn't going be able to address the problems that will inevitably result. Apparently no one else is either. Consider this from today's article:

Brandon Southall, a scientist with the environmental group California Ocean Alliance and a research associate at UC Santa Cruz who studies the effects of noise on marine mammals, is performing a risk assessment on the lease areas for the federal government to assess how to avoid disruptions to endangered animals and noise-sensitive marine life.
Despite the risks, Southall said they shouldn’t derail efforts to deploy the clean energy source given the severity of the climate crisis. He said it’s important that the federal and state governments develop a regulatory framework for companies to ensure they comply with environmental protections.

Simply put, as always Americans will sacrifice the environment and wildlife to generate electricity because we can't maintain our lifestyle without more devices. After all, you can get along without Gray Whales....