The Vietnam War: What it meant when the blind pro-war propaganda of a previous generation threatened your commitment to right and wrong? 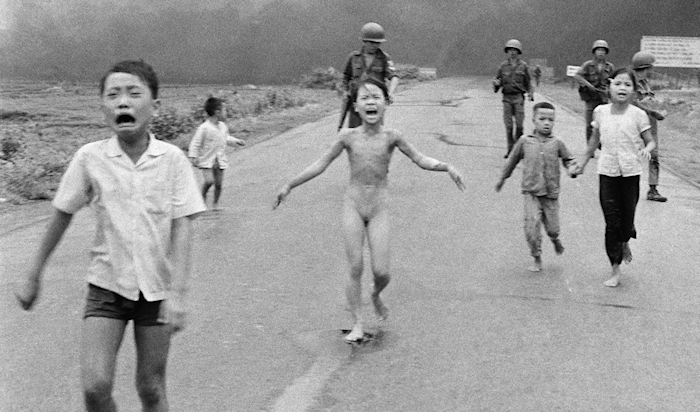 For Americans of my age, this photo published in 1972, came 15 years too late. By then 58,000+ of us had been killed by a choice made by a majority of American voters. After a napalm bomb was dropped on the village of Trảng Bàng, suspected by United States Army forces of being a Viet Cong stronghold, Kim Phúc (aged 9; middle left) runs naked in the street after tearing off burning clothing. Also pictured is her older brother Phan Thanh Tam (aged 12; far left), younger brother Phan Thanh Phuoc (aged 5; background left, looking back), and younger cousins Ho Van Bo and Ho Thi Ting (boy and girl, respectively; middle right). On March 29, 1973, two months after the signing of the Vietnam peace agreement, the last U.S. combat troops left South Vietnam.

For reasons not clear to me, today the publication Foreign Affairs offers a Summer Read of articles on America at War in Vietnam and the Sacramento Bee offers Robert McNamara waged war on Vietnam. His son is a California farmer facing that legacy. The McNamara article offers a perspective from a man near my age who has written the memoir Because Our Fathers Lied.

Nothing this complex is easy to understand. But as with millions of men who came of age in the 1960's, the Vietnam War is a triggering memory for me though maybe not as deep as Craig McNamara. My father, a WWII veteran, opposed the Vietnam War but warned me about the dangers of protesting.

Killing people to prop up your ego and to support your own economic dominance in a distant region of the world not even important to your national economy is never a morally correct public policy. So what do you do when you risk being forced by elected American politicians too do exactly that - kill people for exactly those reasons? 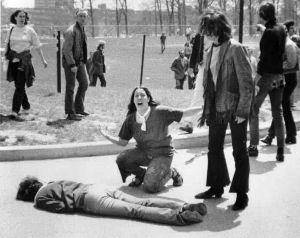 You can protest, of course. And if you do so, perhaps you won't be shot by troops as in the Kent State Massacre which involved  the killings of four and wounding of nine other unarmed Kent State University students by the Ohio National Guard on May 4, 1970 pictured to the left.

Or you could participate in the 1968 Democratic National Convention protests where you could be met with indiscriminate police violence against protesters.

That was later described by the National Commission on the Causes and Prevention of Violence as a "police riot".

Or you could even seriously consider moving to Canada in 1966 because you understood after working with a Quaker associated group, there was little or no chance of effectively altering American pro-war policy which gave U.S. politicians there only chance since 1920 to fight a war with "communists." (This kind of moronic ideological thinking among Americans still occurs today with war advocacy against China.)

What continues to be disturbing is that today essentially half the American voting population and a majority of the states represent a ideological view that would have no problem sending their young people off to a meaningless, foolish war. And those my age remember that it was Democrats who facilitated the war.