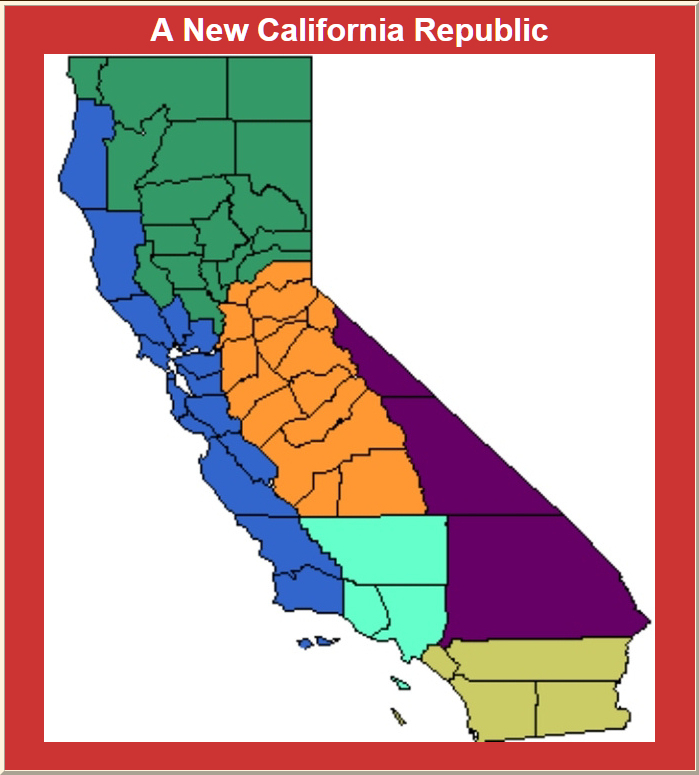 It is not a surprise that the San Francisco Chronicle this week published a piece California has two choices in these dark times: lead or secede.

Because the U.S. Supreme Court's embracing theonomy is the immediate cause of this discussion (see California must protect itself from the rise of "A Handmaid's Tale" theonomist judiciary as more is at risk than abortion and gay marriage), this writer does not see two choices.

Rather, it is time to review and move forward on the California Republic idea long supported in these posts.

The idea is not complicated. California should be as independent as Switzerland or Chile, its people free to create a 21st Cemtiry government of policies not hindered by lingering commitments to racial, economic, or religious bigotry nor by fear of not being the alpha country in a world of sovereign countries.

The proposal is to have the California Legislature petition the Congress of the United States to permit California's independence through a negotiated agreement. This is not a proposal to unilaterally secede potentially causing a second Civil War. Nor is it a "Nationalist" movement based upon some ethnic or extended tribal differences.

Instead, the idea is based upon the assumption that if Californians through their Legislature petition Congress for permission to withdraw from the Union and Congress approves, (perhaps after a referendum on the matter) California simply returns to being the California Republic. No civil war, no terrorist movement, no riots - just an agreement between rational, democratic people.

Why, you might ask, would anyone seriously propose this? (It is a fact that a growing chorus of Texans joined the long-existing large choir in California to advocate for nationhood for their state, but that's a different discussion.)

It is not a new idea that California should return to republic status. A serious proposal gained some headway in the late 1930's but was sidelined because of WWII. At the beginning of the 21st Century, in 2002, the Sacramento Bee Columnist Peter Schrag had the following to say about the idea of California becoming a separate nation:

Notice that the article mentions potential issues such as Roe v Wade, separation of church and state, gun restrictions, etc., in the context of policy changes because California would no longer be in the Union. Uh...

California is still in the Union. During this time, a Californian has been the Speaker of the House and California has a very large share of House members. A former California U.S. Senator is the Vice-President.

"Lead or secede" is not a real choice in a Union again divided as badly as it was in 1860.

And it is a simple fact that "protests" in California against Supreme Court actions are futile for two reasons.

That is why at this point in time we must take up the separation of the California Republic issue.

Why a "failed Union" - instead of a country, nation or state

On June 17, 2018, in an extensive post here Why factually these United States is a more perfect Union, not a country, nation, or state.  The following quote from that post summarizes the facts:

For purposes of clarity and simplicity, as used here from this point on the following words have specific meanings based upon pre-17th Century concepts:
Using those definitions, the Cherokee Nation is a nation. Italy is a country and a state. Japan is a country, a state, and a nation. The United States of America is none of these. It is a union of states.

...We need to understand "these United States" is a union created solely for purposes of a common military defense and assuring economic success of the numerous and separate states, not regulate mundane issues such as who can have sex with whom. That's one reason why in 1792 Americans insisted on leaving establishing government churches to the real states.

You can follow the link to read the entire post. A year later in 2019 preeminent historian Jill Lapore wrote A New Americanism: Why a Nation Needs a National Story discussing the same issues and offering this observation:

But in the 1970s, studying the nation fell out of favor in the American historical profession. Most historians started looking at either smaller or bigger things, investigating the experiences and cultures of social groups or taking the broad vantage promised by global history. This turn produced excellent scholarship. But meanwhile, who was doing the work of providing a legible past and a plausible future—a nation—to the people who lived in the United States? Charlatans, stooges, and tyrants. The endurance of nationalism proves that there’s never any shortage of blackguards willing to prop up people’s sense of themselves and their destiny with a tissue of myths and prophecies, prejudices and hatreds, or to empty out old rubbish bags full of festering resentments and calls to violence. When historians abandon the study of the nation, when scholars stop trying to write a common history for a people, nationalism doesn’t die. Instead, it eats liberalism.

Lapore's article explores the issues in depth but at the end offers this warning:


At the close of the Cold War, some commentators concluded that the American experiment had ended in triumph, that the United States had become all the world. But the American experiment had not in fact ended. A nation founded on revolution and universal rights will forever struggle against chaos and the forces of particularism. A nation born in contradiction will forever fight over the meaning of its history. But that doesn’t mean history is meaningless, or that anyone can afford to sit out the fight.
“The history of the United States at the present time does not seek to answer any significant questions,” [the Pulitzer Prize–winning, bowtie-wearing Stanford historian Carl] Degler told his audience some three decades ago. If American historians don’t start asking and answering those sorts of questions, other people will, he warned. They’ll echo Calhoun and Douglas and Father Coughlin. They’ll lament “American carnage.” They’ll call immigrants “animals” and other states “shithole countries.” They’ll adopt the slogan “America first.” They’ll say they can “make America great again.” They’ll call themselves “nationalists.” Their history will be a fiction. They will say that they alone love this country. They will be wrong.


We are now two full decades into the 21st Century there can be no doubt that we must acknowledge Degler's warning. But Lapore's hope that some historian will save the day is foolish. We literally no longer teach history. In fact, those Amazon Echo's mostly named Alexa offer a question "How many stars are there on the American flag?" In generations past everyone had that kind of information drilled into them by second grade. But at some point in the past three decades, in grades K-12 we replaced history with sociology, and the U.S. has always been and could never otherwise be a sociological mess.

To unify Swedish, Hungarian, and Italian immigrants Americans don't need to know more about their cultural differences. If we can't learn to simply ignore culture, ethnic, and racial differences then the United States must cease as the Union that once attempted to serve as a model for unifying the world.

After only 70 years the United States descended into what was, at that point in time, the worst war in history. As Lapore notes: "The American Civil War was a struggle over two competing ideas of the nation-state. This struggle has never ended; it has just moved around."

As explained in a History.com article: "The struggle between pro- and anti-slave forces in Kansas was a major factor in the eruption of the Civil War."

Sure there was (and is) the Deep South. But Border-State Kansas-like struggles now exists in the southwestern states, states which were once part of Mexico until, a decade before the Civil War the Union started and won a war with Mexico.

The fact is that California and Texas were part of Mexico but then both became republics before joining the United States. Perhaps that stimulates the significant popular movements advocating for the withdrawal of the two states from the Union.

How to move forward towards a new California Republic

Article IV,  Section 3,  Clause 1 of the Constitution provides as follows:  "New States may be admitted by the Congress into this Union; but no new State shall be formed or erected within the Jurisdiction of any other State; nor any State be formed by the Junction of two or more States, or Parts of States, without the Consent of the Legislatures of the States concerned as well as of the Congress."

Additionally, the 10th Amendment provides as follows: "The powers not delegated to the United States by the Constitution, nor prohibited by it to the States, are reserved to the States respectively, or to the people."  This would seem to imply that where clarity in the Constitution is lacking, when a state is involved in something such as removal from the Union, if it has approved the idea of being out of the Union that ought to be sufficient.

In other words, if the Legislature of California were to request that the state be permitted to withdraw from the United States and Congress approves, then the separation of California from the Union would be pursuant to a bilateral agreement between the parties and legally sufficient.

Obviously, such an agreement would come about through the negotiation of an "Agreement Document" which presumably would cover the complex issues involved and would ultimately have the legal status of a treaty.  And, just to assure the democratic nature of the action, it should only be effective if approved by California voters in a referendum.  This would lay to rest the question of the existence of the implied power since the State and its people would have approved the action.

Secession is a hostile act involving insurrection and rebellion.  Separation could be accomplished in a process of mutual respect, understanding, and agreement.

So, the steps would seem fairly straightforward:

It seem as though such a legal process is fairly straightforward, albeit difficult to get accomplished. But it would be a process preferable to a four-year civil war.