Welcome to the second year of Covid-19 in which new, more dangerous variants are already here 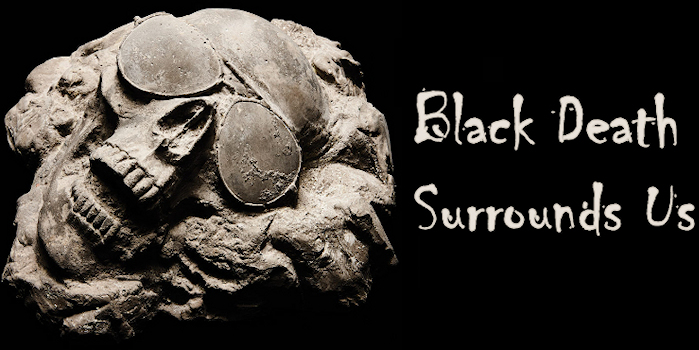 In mid-December the first vaccines were released for use. Folks became hopeful or paranoid, the latter because vaccines are based on science which is apparently is witchcraft. Well, not if it produces cars, tvs, smart phones, but if it is about health its witchcraft because human lifespans have shortened decades since the Dark Ages.

Unfortunately just as vaccines were being released, two far more contagious mutant strains of Covid-19 were discovered, one in Britain and one in South Africa.

Among the many things we didn't know is that a more contagious strain is more dangerous than a more deadly strain as explained here:

...Consider an example put forth by Adam Kucharski, a professor at the London School of Hygiene & Tropical Medicine who focuses on mathematical analyses of infectious-disease outbreaks. Kucharski compares a 50 percent increase in virus lethality to a 50 percent increase in virus transmissibility. Take a virus reproduction rate of about 1.1 and an infection fatality risk of 0.8 percent and imagine 10,000 active infections—a plausible scenario for many European cities, as Kucharski notes. As things stand, with those numbers, we’d expect 129 deaths in a month. If the fatality rate increased by 50 percent, that would lead to 193 deaths. In contrast, a 50 percent increase in transmissibility would lead to a whopping 978 deaths in just one month—assuming, in both scenarios, a six-day infection-generation time.
...The initial estimates from the data suggest that this variant could be about 50 to 70 percent more transmissible than regular COVID-19. To make matters thornier, we aren’t yet exactly sure why it’s more transmissible, though reasonable theories are already being tested. This variant, now called B.1.1.7, has “an unusually large number of genetic changes, particularly in the spike protein,” which is how the virus gains entry into our cells. The new variant may be better at eluding our immune response and replicating, or be able to better bind to locations in our body more conducive to infecting others, but that is all speculative for the moment.

That explanation triggered in my mind an immediate explanation of what was going on in this graph of California's runaway hospitalizations and daily death numbers (click here to see a larger version): 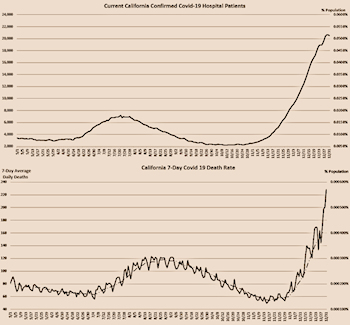 While humanity is still learning about the new variants, both of which are in the United States, what we do know is framed in an article:

The new coronavirus strain that emerged in South Africa is even more problematic than a mutated form that prompted new lockdowns across much of the U.K., health authorities said on Monday.
“I’m incredibly worried about the South African variant,” U.K. Health Secretary Matt Hancock said on BBC radio Monday, citing a conversation over the Christmas holiday with his counterpart in South Africa. “One of the reasons they know they’ve got a problem is because, like us, they have an excellent genomic scientific capability to be able to study the details of the virus. And it is even more of a problem than the U.K. new variant.”
The South African variant is driving a surge of infections in the country, and like the U.K. strain, it appears to be more infectious than previous mutations. Still, there’s no evidence yet that the Covid-19 vaccines approved so far won’t work against the new strains.

Oh good. There's no evidence yet...

In the U.S. our genomic scientific capability is mostly on a par with the poorest third world countries because we can't imagine spending money on things for which there is "no evidence yet."

California recently learned that the British variant is here, perhaps even widespread but we need a few more weeks. So far I haven't seen any evidence yet that the South African variant is here.

Unfortunately, some initial evidence indicates that the South African variant may not be as responsive to the vaccines, but we don't have any evidence yet.

What we do know is that the South African variant does appear to be infecting more young people without pre-existing conditions who are becoming severely ill.  But we don't have any evidence yet.

The main thing here in the second year is that we have to get our businesses open and our kids back to school....

In the meantime, to the right is a convenient calendar for tracking the second year!