Increasing the size of the U.S. Supreme Court to meet workload demands is 150 years overdue 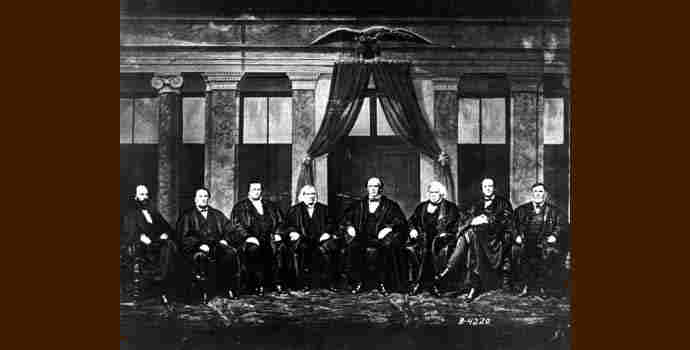 The Supreme Court was created in 1789 with five members. In this first photograph
of the Court in 1869 the number had been increased to nine.

Based on an exchange in the Vice-Presidential Debate and many news stories, apparently the Republicans fear Democrats will increase the size of the U.S. Supreme Court. We'll review the very changeable size of the Court as the federal judiciary grew during the nation's first 80 years.

But first, we have to acknowledge that the Republicans have resurrected a political term called "packing" which is being repeated over and over again by the press, offering no context as usual.

Did you ever wonder where the term "packing the court" regarding the U.S. Supreme Court came from?

The Judicial Procedures Reform Bill of 1937 was a legislative initiative proposed by U.S. President Franklin D. Roosevelt to add more justices to the U.S. Supreme Court the existing Court membership had ruled unconstitutional New Deal legislation approved by Congress that was intended to help the poor and working class in distress during The Great Depression. Those from the wealthy classes in positions of influence with Congress coined the term "packing the court" as part of their opposition.

It is, of course, a politically charged term that does not reflect the history of federal court system, particularly the size of the Supreme Court.

The Judiciary Act of 1789 adopted by the first Congress established a six-member Supreme Court composed of a chief justice and five associate justices. Congress changed the Court's size seven times in its first 80 years, from as few as five justices to as many as 10.

The Act also established three court circuits which were groups of judicial districts. Each circuit court consisted of two Supreme Court justices as the three circuits existed solely for the purpose of assigning the justices to a group of circuit courts.

The number of circuits remained unchanged until the year after Rhode Island ratified the Constitution, when the Midnight Judges Act reorganized the districts into six circuits, and created circuit judgeship's so that Supreme Court justices would no longer have to ride circuit.

As the nation's boundaries grew, Congress added justices to correspond with the growing number of judicial circuits: seven in 1807, nine in 1837, and ten in 1863. Until 1866, each new circuit (except a short-lived California Circuit) was accompanied by a newly created Supreme Court seat

Today there are 11 numbered circuits and the D.C. Circuit which are geographically defined by the boundaries of their assigned U.S. district courts. A 13th court of appeals is the Federal Circuit, which has nationwide jurisdiction over certain appeals based on specialized subject matter.1

So, of course, based on the number of circuits we have 13 Supreme Court Justices, a Chief Justice and 12 Associate Justices. Well, no.

In order to limit the power of President Andrew Johnson, at the request of Chief Justice Chase Congress in 1866 passed an act providing that the next three justices to retire would not be replaced, which would thin the bench to seven justices by attrition. One seat was removed in 1866 and a second in 1867. But in 1869, after Grant became President, the Circuit Judges Act returned the number of justices to nine as pictured above.

Here is a map of the court circuits: 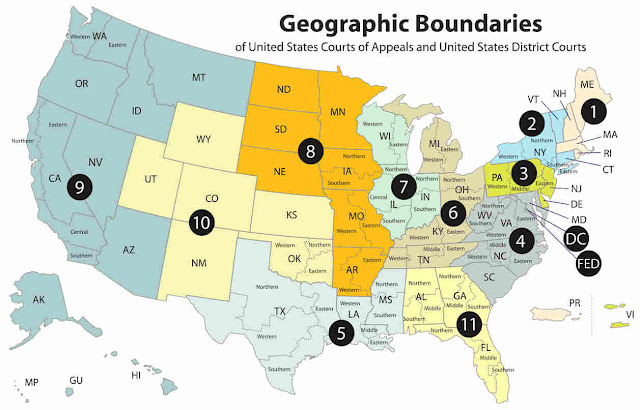 Political issues notwithstanding, nothing about the organization of the federal court system including the Supreme Court makes any sense at all if you look at the circuit district map and population chart. If nothing else, the number of appeals to the Supreme Court each year must be considerably higher than it was in 1869. That means the Court really is unable to address the demands of our legal system. And has been unable to do so for some time.

Of course, the form of government of the United States is not now and never has been a democracy nor is its organization logical related to workload. It always has been a government of battling ideologies. Consider:

Today, in a Republic that has 50 Senators, 2 each from each state, each represents as few as 0.5 million people (Wyoming) and as many as 37 million people (California). The Senators vote to confirm Supreme Court Justices, so why would anyone expect the Court to reflect anything but the politics of the Senate?

But one thing needs to be made clear. The founding fathers did not create a Supreme Court with nine members. Really no one did, as it was a accident of post-civil-war politics. Republicans used the term "packing the court" to attack Franklin Roosevelt's new deal efforts. But nine is no mystical right number.

Really, the Court has been used as an ideological tool by politicians. And that is the way it is now, albeit currently with a heavy emphasis on Catholic religious dogma. It is not a coincidence that Republicans anticipate the Court reversing rulings on abortion and gay marriage. The fact that Republicans deny the religious tie is particularly galling. But it is obvious to anyone who looks a the biography of the court members.

The likelihood of Joe Biden, if elected, to attempt to increase the size of the court is not straightforward. If the Democrats in 2021 were to find themselves with 60+ Senators, perhaps. But just having a simple majority of two, say, is not enough because the Democratic Party has no consistent ideological or other requirements for membership except the act of registering to vote in your home county as a Democrat, which anyone can do.