What was wrong with managed timber harvesting???
When your air is clogged with congestive
climate change, who should be blamed?

In 1976, a 28-year-old newly minted Congressman, Al Gore, held the first congressional hearings on the climate change, and co-sponsored hearings on toxic waste and global warming. About that, in December 2016 we noted: "But on climate policy 40 years ago, he..., well, kids..., my generation failed him and you."

In December 2017 in the post Foolish planning and the inevitable wildfires: What could have been learned from John Steinbeck about California's true climate we noted: "What we cannot do honestly is blame it on Global Warming which at worst only accelerated an inevitable timeline. And we are not going to "fix it" because we are the environmentally aware California. " 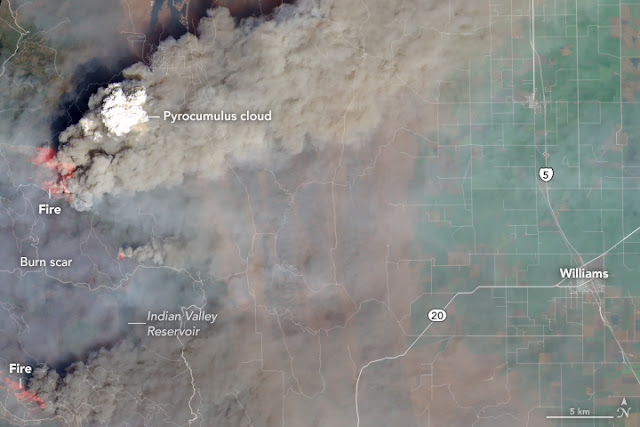 On August 6, 2018, the Operational Land Imager (OLI) on Landsat 8 captured an image (top) of a dense column of smoke topped by a pyrocumulus cloud over the Ranch fire. The heat generated by intense wildfires can churn up towering pyrocumulus and pyrocumulonimbus clouds, which lift smoke above the lowest part of the atmosphere, the boundary layer. Then that mix of carbon monoxide, carbon dioxide, hydrocarbons, nitrogen oxides, organic carbon, and black carbon often travels hundreds or thousands of kilometers away from the source before descending.

Cal Fire says more than 750,000 acres have burned so far in 2018, combusting grass, trees, homes, and all pushing out greenhouse gases.
The fires have consumed three times as much land as the 2013 Rim Fire, which the U.S. Forest Service estimates released 10-to-15 million metric tons of carbon — roughly the equivalent of the emissions resulting from a million Californians over a year.

As explained in Huge wildfires can wipe out California’s greenhouse gas gains:

Most years, the amount of greenhouse gases spewed by California’s cars, factories and power plants drops slightly — a hard-won result of the state’s fight against global warming.
And in any given year, one big wildfire can wipe out that progress.
Over the course of just a few weeks, a major fire can pump more carbon dioxide into the atmosphere than California’s many climate change programs can save in 12 months. Scientists debate whether California’s vast forests are emitting more carbon dioxide through fires than they absorb through plant growth.
To get a sense of the problem, look at 2015
Greenhouse gas emissions across the California economy inched downward by 1.5 million metric tons that year, the most recent for which emissions data are available. And just one fire in 2015 — the Rough Fire, in the foothills of Fresno County — produced 6.8 million metric tons of greenhouse gases, according to an estimate from the U.S. Forest Service.

This is a problem, of course, for the State of California's whole self-congratulatory aggressive environmental policy. For instance, up to 2018, wildfire impacts have not been considered in reports about progress such as this one... 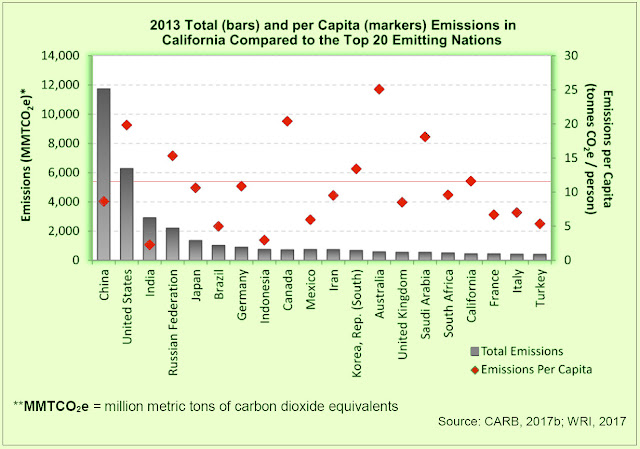 ...because wildfires have been considered natural phenomenon. And so each year since that chart, some gain has been reported.

The adverse effects of increasing wildfire on human assets, and altered fire regimes on ecological integrity, are becoming a worldwide concern, especially in the wake of recent “megafire” events in some regions, which have resulted in enormous loss of human lives and properties. Most of these large fire events are driven by extreme weather conditions combined with prolonged drought; and escalation in fire activity is widely attributed to climatic factors and global warming. Furthermore, projections suggest that fire extent, frequency, and intensity could skyrocket in upcoming decades due to warmer temperatures and drier fuels, although there is inherent variability and regional variation.

Climate was significantly less important where humans were more prevalent, suggesting that human influence could override or even exceed the effect of climate change on fire activity. Although climate change may play a significant role in altering future fire regimes, geographical context and human influence should also be accounted for in management and policy decisions.

As explained in As California Fires Continue, $170 Million In Grants Given To Reduce Fire Threat:

While California experiences another destructive fire season, the California Department of Forestry and Fire Protection (CAL FIRE) announced that more than $170 million has been awarded in grants to prevent catastrophic wildfires, like the Carr Fire and Mendocino Complex, and restore forest health. More than 100 agencies and organizations across California will receive funding to help the state reduce greenhouse gas emissions from wildfires and sequester carbon.
With funds provided by the Greenhouse Gas Reduction Fund for California Climate Investments (CCI), CAL FIRE awarded 142 fire prevention grants totaling $79.7 million and 23 forest health projects totaling $91.5 million.
The Fire Prevention grants will enable local organizations like fire safe councils, to implement activities that address the risk of wildfire and reduce wildfire potential to communities and forests. Funded activities include hazardous fuel reduction, fire planning, and fire prevention education with an emphasis on improving public health and safety, all while reducing greenhouse gas emissions.
“California continues to invest millions of dollars into creating healthier, more resilient forests that benefit all of us,” said Chief Ken Pimlott, CAL FIRE director and California’s state forester. “Already this year more than 700,000 acres have burned across the state creating significant carbon releases that counter our efforts at reducing greenhouse gases. Local projects funded by this money will prevent wildfires before they start, and when combined with our fire prevention activities, will help move us toward our greenhouse gas reduction goals.”

Wow! The Californian who bought a Tesla Model S for $90,000 must be really into carbon emission reduction. Not only did she shell out for that, she paid the State $4.25 of her taxes to address the wildfire problem.

Of course, it might be effective to have the State raise her taxes for wildfire reduction and forest health projects to $42.50 per person generating $1.7 billion a year to spend on reducing wildfire emissions and increasing Carbon Dioxide absorption.

But hey, being human we're looking for someone else to blame as noted in California Wildfires Are Causing Billions in Damage. Who Will Pay? I wonder when the Trump people will be pointing out the liberal environmentalists opposition to timber harvesting?

As noted in a previous post, managed timber harvesting could create jobs for people who don't work at desks, people lefty,techie liberals seem to not care about.
Posted by Michael O'Faolain - at 2:48 PM