The risky policies of "know nothing" political amateurs
Protecting the value of U.S. technology,
including biotechnology, could be suicide

This New York Times headline on Page D1 (page D1???) of the August 28 edition is seemingly more important than most articles about the Trump Administration on the front page. At least the article reluctantly recognizes a relationship between its subject - mutated flu virus samples - and the dangers of the deplorable trade war of the Trump Administration.

What could the avian influenza A(H7N9) virus possibly have to do with the trade war and technology (which includes biotechnology)?

Well, if you're interested in making money on a health threat, you could order the market research report H7N9 Vaccines Market Sales Area and Gross Revenue of Key Manufacturers 2018.

Or you could just read the New York Times story which explains:

...More than one year after a devastating wave of H7N9 infections in Asia — 766 cases were reported, almost all in China — the Centers for Disease Control and Prevention is still waiting for several viral samples, the National Security Council and the [World Health Organization] confirmed.
Scientists at the Department of Agriculture have had such difficulty obtaining flu samples from China that they have stopped requesting them altogether, according to a government official who spoke anonymously because he was not authorized to discuss the matter.
Recent trade tensions could worsen the problem.
The Office of the United States Trade Representative in April released a proposed list of products to be targeted for tariffs — including pharmaceutical products such as vaccines, medicines and medical devices.
So far, none of those medical products have landed on the final tariff lists. But lower-level trade negotiations with China concluded on Thursday with few signs of progress, increasing the likelihood of additional tariffs.
The United States relies on China not only for H7N9 influenza samples but for medical supplies, such as plastic drip mechanisms for intravenous saline, as well as ingredients for certain oncology and anesthesia drugs. Some of these are delivered through a just-in-time production model; there are no stockpiles, which could prove dangerous if the supply was disrupted, health officials said.

Most Americans, and most certainly the Deplorables, think the trade issues are about cell phone technology, autos, and steel in terms of their personal wealth. But those who understand political economics know it is also about the potential for severe illness and death, the avoidance of which has economic value.

Scientists believe top commerce officials in both governments view the viral samples much like any other laboratory product, and may be unfamiliar with their vital role in global security.

For over a decade, epidemiological data and samples have been used as trade war pawns. 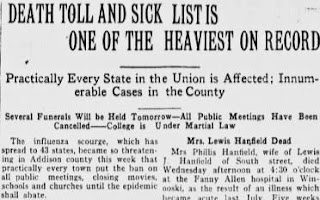 And here is where determining whether free trade or nationalism is the most important element in political economics can become a problem. Influenza A viruses usually are associated with more deaths in children and the elderly. If we don't have a vaccine for a truly virulent Influenza A strain, about 2 million Americans could die, using as an indicator the 1918 Spanish Flu which was also an Influenza A subtype.

The World Health Organization - also known by its acronym WHO - would usually be able to facilitate sharing of the viral samples under an existing agreement. If you occasionally read the news perhaps  "WHO" seems similar to another acronym "WTO" the Trump people have been denouncing. That acronym stands for World Trade Organization under which trade is governed by agreements which the United States is currently blocking by preventing appointments to its Appellate Body as part of its trade war against China. 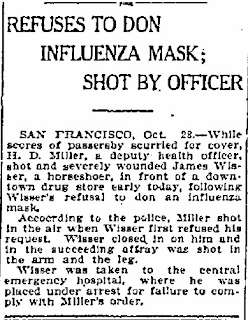 In 1918 when the Spanish Flu hit the world, World War I was just ending. By the early 1920's due to a resurgence of xenophobic American nationalism, world trade was handled with bilateral negotiations. The U.S. position had sentenced the League of Nations to a meaningless existence. That ultimately led to the Great Depression and WWII.

Or perhaps Americans all need to move our attitudes into the 21st Century. In the meantime a headline in June noted H7N9 Spreading Westward from Southern and Eastern China.
Posted by Michael O'Faolain - at 3:32 PM