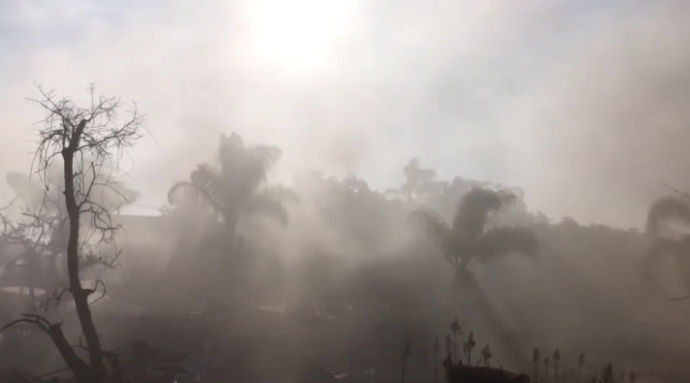 The smoke obscures our vision of reality when it comes to wildfires. This week while reading California's Climate Emergency in Rolling Stone I was confronted with this statement:


In the hills above the Pacific Ocean, the world crossed a terrifying tipping point this week.
[...]
As the largest of this week's fires skipped across California's famed coastal highway 101 toward the beach, rare snowflakes were falling in Houston, all made possible by a truly extreme weather pattern that's locked the jet stream into a highly amplified state. It's difficult to find the words to adequately describe how weird this is. It's rare that the dissonance of climate change is this visceral.
[...]
For years, climate scientists have warned us that California was entering a year-round fire regime. For years, climate campaigners have been wondering what it would take to get people to wake up to the urgency of cutting fossil fuel emissions. For years, we've been tip-toeing as a civilization towards a point of no return.

That time is now.

Well, yes and no. As John Steinbeck said "...God save me from amateurs. [...] They have the authority of ignorance, something you simply cannot combat."

California has a climate history clearly described in the writings of that California native Steinbeck, most significantly in his second novel To A God Unknown published in 1933 which tells an allegorical tale of the California experience.

The protagonist, Joseph, comes to California to create his future. He discovers a place of apparent wealth and promise. And indeed he appears to be achieving all that he dreams. But over time, tragedies strike and drought undoes his life work.

The story is about the arrogance of Californians who hold the belief that their efforts as humans, individually and collectively, create orderly wealth in a place where natural wealth has always existed in its own order of things.

Steinbeck later acknowledged that To A God Unknown was the hardest for him to write, taking him more years than his better known works. Part of the problem is that he initially tried to adapt a play written by a friend but kept adding context based upon facts as he understood them. And what he understood from the generations of Californians who preceded him was the truth about the land and the water, a truth we need to face.


About every thirty years there have come periods of rainlessness to Central and Southern California. These desolating years seem to come creeping up out of the white desert to warn the west that it will one day die as the desert has died. They are like the Reminders of Death at an Egyptian feast ....
And now the periodic drought had settled on the land. Little by little, year on year the water was sucked from the ground. The hills looked gaunt and hungry and pale. The bones of many thousands of starved cattle were whitening on the ground. Two families of Waynes packed up their possessions and drove away. Joe watched his dying land with terror and with loathing. - From an early draft of To A God Unknown by John Steinbeck

Sadly Joe's "terror" derived from a normal California weather cycle. Twenty years ago in 1993, Scott Stine, Ph.D, of the Department of Geography and Environmental Studies at California State University, Hayward, completed a research study entitled "Extreme and Persistent Drought in California and Patagonia During Mediaeval Time" which was subsequently published in June 1994 in the academic journal Nature. In it he offers the evidence, now supported by others, that indeed before and after the year 1000 AD California had two droughts that lasted well over 100 years.

In May 2001 the website Sierra Nature Notes: The Online Journal of Natural History News in the Sierra Nevada published a followup article by Stine "The Great Droughts of Y1K" in which he explained what he believed to be the weather pattern associated with the 100+ years droughts:


One may reasonably ask why these droughts occurred. The simple answer lies in the wintertime configuration of the "storm track" (a.k.a. the "jet stream" and the "polar front") over the northeastern Pacific. When the storm track persists over California for much of the winter (as it did, say, in 1982, ‘83, 86, and ‘96), many Pacific cyclones are steered over the state, and we accumulate much precipitation. When the track lies to the north of California, the fronts are steered away, and the region remains dry. This latter case prevailed during the 1976-77—the one period of our instrumental record dry enough to provide an analog to the Medieval droughts....
Evidence is now emerging that the "dry-winter-in-California, wet-winter-in-Alaska" model holds true not only for 1976-77, but for much of upper Medieval time as well....
...Persistent droughts, moderate by Medieval standards but strident relative to our "normal" conditions of the past 150 years, drew lakes and rivers well below their modern levels on numerous occasions during the past two millennia, most recently during the late 18th and early 19th centuries. Indeed, increasing evidence indicates that there is little that is climatically "normal" about the past century - and- a-half; it appears, in fact, to be California’s third- or fourth-wettest century-scale period of the past four or more millennia.
Since statehood, Californians have been living in the best of climatic times. And we’ve taken advantage of these best of times by building the most colossal urban and agricultural infrastructure in the entire world, all dependent on huge amounts of water, and all based on the assumption [it] will continue as it has during the past 150 years. Yet even in these best of times we have run out of surplus water, and we fight over allocation.

So yes, Climate Change may very well be speeding up the return to an "upper Medieval time" dry weather period measured in centuries. We could, of course, have simply read Steinbeck's story which  begins as California migration stories begin and ends with an expression of regret:


After a time of wandering, Joseph came to the long valley called Nuestra Señora, and there he recorded his homestead. Nuestra Señora, the long valley of Our Lady in central California, was green and gold and yellow and blue when Joseph came into it. The level floor was deep in wild oats and canary mustard flowers.
[...]
Joseph leaned back against his saddle again, and suddenly he chuckled. "I will go," he said. "I will take every means. Look, Juanita. You know this place, and your ancestors knew this place. Why did none of your people come here when the drought started. This was the place to come."
"The old ones are dead," Juanita said soberly. "The young ones may have forgotten."
And time passed and Joseph grew grey too.... "I should have known," he whispered.... "I am the land," he said, "and I am the rain." - from To A God Unknown by John Steinbeck

Indeed, the young ones do "forget" in the sense that from generation-to-generation people start over by leaping at opportunities without studying to learn the lessons of all times before them. And so in California there was this: 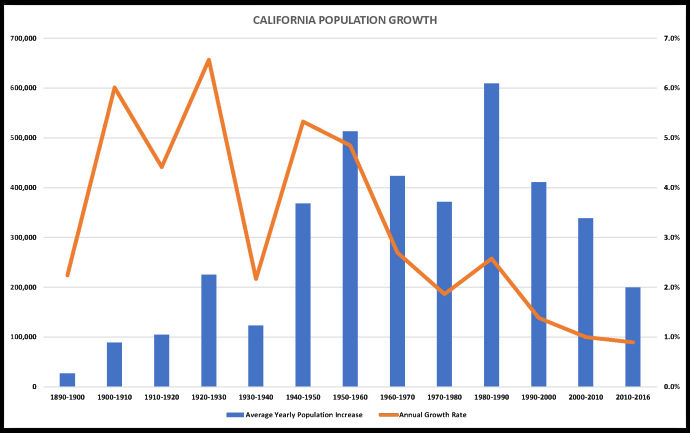 When the dust came up, people were starving; they had no place to go. Naturally, they went in a direction where they would not suffer from cold: they went toward California. They came in the thousands to California. - John Steinbeck in an interview on British radio

Ignoring history and Steinbeck, Californians bought land and built buildings and were and are homeowners and businesses owners. Now they have to live with what always was the normal California climate. And they need to quit calling it a "drought" when history and science tell us most of the 20th Century was a very extended wet cyclonic period, an abnormal time.

What we cannot do honestly is blame it on Global Warming which at worst only accelerated an inevitable timeline.

And we are not going to "fix it" because we are the environmentally aware California.

In fact, as explained in the San Francisco Chronicle despite our environmental activism California is the source of more harm than ever and it is just possible that human population growth and related governmental planning for real estate development based on historical scientific studies going back as long as ...oh... a couple of decades is a cause: