Democrats, about that tax reform bill
The unseen Republican political strategy
as Ryan says minds are going to change

Here's everything you need to know about the Republican tax bill (aka the Tax Cuts and Jobs Act of 2017), the most significant tax reform in 30 years.

Democrats are, and apparently will continue to be, telling those folks their extra take home pay will be reduced to nothing by 2027, or in some cases 2023, or 2025 or.... Well, it's complicated and it will be different strokes for different middle class folks.

And they'll be telling those folks, the majority of whom are personally in a-bit-to0-deep debt, that the federal government's debt is going to rise, by some number which no one knows.

And maybe those liberals will publish for each other to read some long working papers and brilliant magazine articles on the inequities of the tax bill.

In any event, the "pointed-headed intellectuals" will be telling each other how bad the tax bill is/was.

And they'll share that discussion with the middle class workers who will be puzzling how what they are being told relates to their reality - extra bucks in the paycheck. (Yeah, ok, their electronic payroll deposit.)

If asked about the possible disappearance of that extra take home pay, the Republicans will explain that if the Democrats in 2017 had just joined them in cutting taxes they could make the middle class tax cuts permanent - all it would require is a one time rule change. And they will explain that the voters could replace the Democrats with Republicans and that will get the job done.

And the middle class folks who might just vote for Democrats in 2018 because of morality issues will be asking those very same Democrats in 2020 if they're going make permanent the Republican tax cuts for the working folks. Because they know that almost every year income tax rule adjustments are approved and that sometimes, such as in the Economic Stimulus Act of 2008 when a bunch of extra tax rebates were sent out, the deficit issue is ignored by Democrats.

After all, the tax cuts for the rich and corporations (who donate to the Democrats as well as the Republicans) are permanent. Why would the Democrats in 2020 oppose that for the working folks?

So to summarize, all you need to know is that in 2018 most folks will take home more income because of the Republican tax cuts. By 2020 they will understand that it was the Democrats who made their tax cuts temporary - Donald Trump will tell them it is true. And it might be the simple truth.

Some will argue that it's not going to be that simple as various deductions change in the bill. Right? The LA Times offers this information for some real Californians: 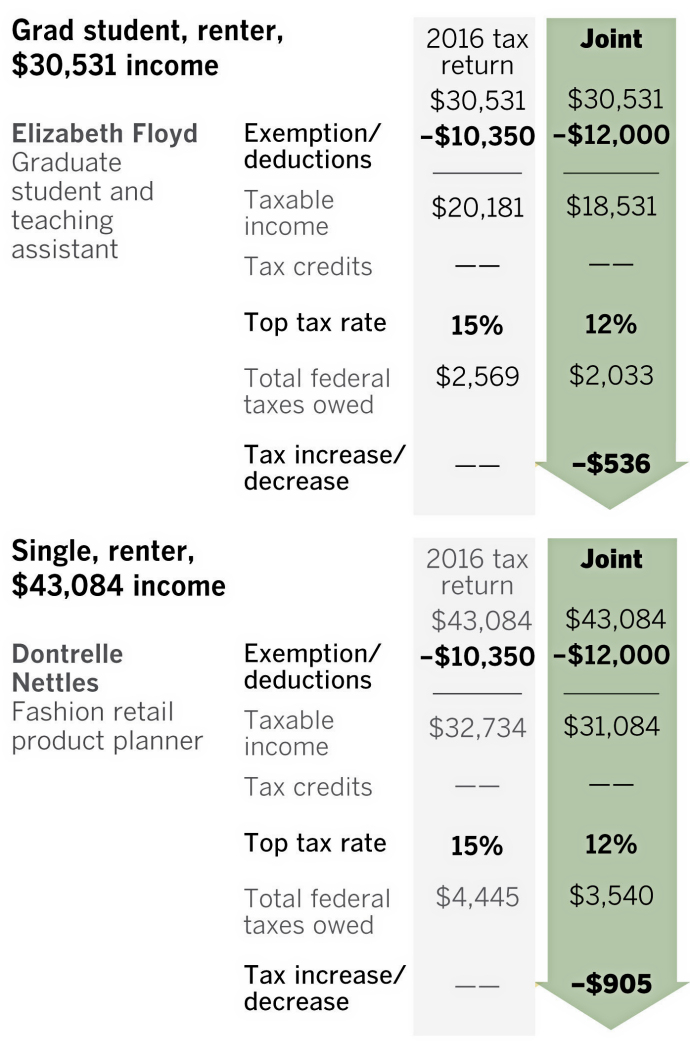 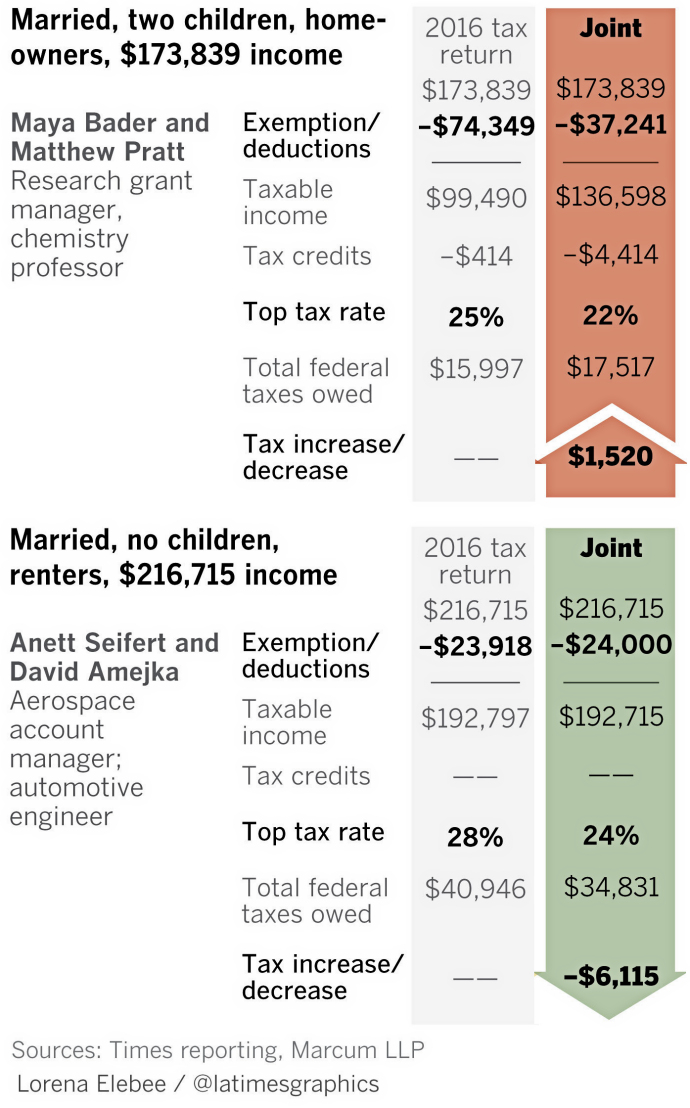 The first thing you notice that the only loser in the the new tax bill lottery was the couple that owns a house. As explained by the Times:

Maya Bader, 39, and her husband Matthew Pratt, 41, bought a new house last year. Between mortgage interest, property taxes and California income taxes, they took more than $58,000 in deductions....
The plan allows taxpayers to deduct up to $10,000 in combined property and state income taxes....
But Bader and Pratt, like many Californians who own homes and have good incomes, will still lose. They deducted more than $26,000 in state income and property taxes last year....
They’ll also lose out on a deduction for interest paid on a home equity loan....
Richer child tax credits will shave $4,000 off their tax bill.

With this explanation we can see the reality of who loses. Let's begin with income: 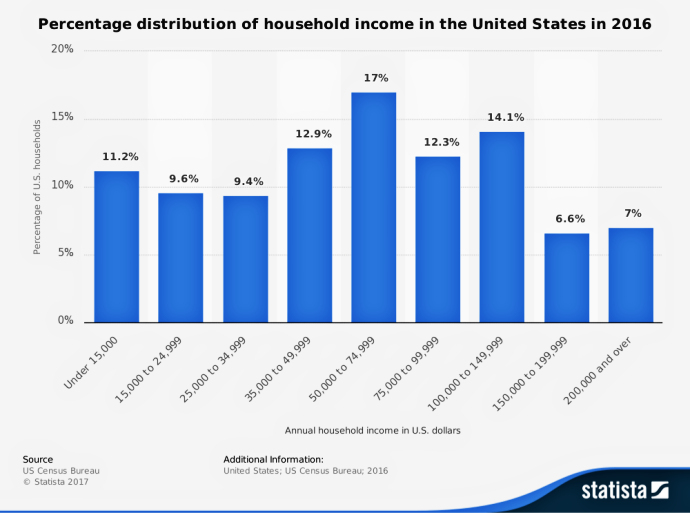 To begin with, to be a loser among these four examples, your household income must be in the top 14%. And to be a loser you apparently have to be unaware of the 2008 housing market bubble crash and go deeply into debt to buy a very expensive house.

The couple that rents itemized less deductions and, because the tax plan almost doubles the standard deduction and puts them in a lower tax rate, they will do better seeing their net income rise about $500 per month (compared to the $125 decrease on the homeowner couple). But that means that their federal tax will drop from almost $41,000 per year to almost $35,000 per year.

What is obvious to many Californians is that the federal government tax policy will stop subsidizing unjustified housing price inflation harming lower income folks in California urban areas.

Both higher earning couples in the Times story itemized. In the first part of 2019, as tax filing season gets underway, those taxpayers will be figuring out on their tax returns whether to take the standard deduction or to itemize. The losers will continue to itemize, but the couple with the highest income will probably stop itemizing.

Based on past statistics indicated in the chart below, just consider how few voters will be interested in all the BS in the press about various deductions. But then the press has to fill either space (print media) or time (video news): 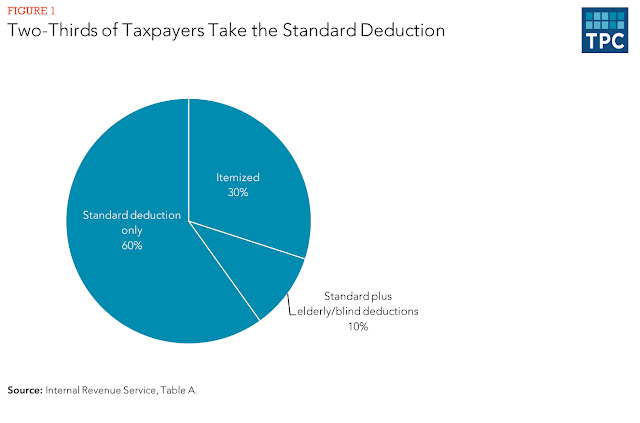 Again, the new plan nearly doubles the standard deduction and alters the available itemized deductions (though it does away with the exemption system). So that percentage of taxpayers who itemize likely will go down making tax filing simpler for more people.

And for the Millennials who likely will have to live with much of this tax bill for 30 years, it may be a winner for those working and/or trying to get an education or training as explained by CNN Money.

Regarding all the other stuff in the tax bill, the average American knows that most of the rich and some corporations will do better. As they always do, along with their accountants and tax attorneys.

What exactly again is the problem with this again, Democrats?

If anyone thinks the general public will understand and remember the intricacies of this tax bill in 2020, they are deluded. Let me offer a recent article on the bill from one of my sources of information on matters related to municipal issues which discusses complex special provisions in the Bill almost nobody in the general public knows about like "the brand new Base Erosion Anti-abuse Tax" (BEAT), the fact that "engineers and architects won a special exemption in the tax bill", and other matters.

Finally, while some corporations are big winners, some policy surprises lurk in this bill, maybe even for Donald Trump supporters, maybe even for Donald Trump who is never going read it. Consider this article The GOP tax bill is a massive victory for globalization. The possibilities when considered over the long term could mean economic opportunities for struggling California corporations such as Apple and those opportunities could accrue to California with the right incentives.

This is why we see the headline Speaker Paul Ryan: 'Minds are going to change' on Republican tax bill.

Of course, we all know that for any number of reasons before November 2020 the world's economy could be hit by a recession/depression or the U.S. could be hit with runaway inflation or...not. But one of the lesser-known aspect of the plan could create major economic growth: the provision that lets companies fully deduct their investments in plant and equipment in one year. When accelerated depreciation was introduced in the Economic Recovery Tax Act of 1981, according to Tax Foundation modeling the long term impact was an increase in the GDP by 2.69%.

The thing is, that tax bill is a winner for the Republicans and particularly the Koch Neoliberals who already dominate politics in America.

And the bill is a winner because it represents a dozen compromises, where Republicans have had to compromise with each other which resulted in such things as tuition waivers continued, employer tuition assistance remains non-taxable, some state and local taxes remain deductible, etc. No Democrats were involved in the compromises.

Right now the Koch Neoliberals are cheering the current liberal media/politicians sexual morality campaign because they understand that the very-repugnant-to-them Roy Moore received the following vote:

Nonetheless, in 2017 it's the Democrats who are putting at risk the most Congressional and legislative seats in the sexual morality campaign.

The Republicans understand that for American voters in 2020 it will be all about "the economy, stupid" meaning how much money the folks take home. And they will be taking home more money because of the Republicans.

That's because Republicans understand if you don't win, you have no power. For Democrats, it's about some complicated discussion among the indignant, not winning.
Posted by Michael O'Faolain - at 3:11 PM