The 115th U.S. Congress aims for budgetary chaos in California public services by 2020

DON'T READ THE CAPTION - QUICK, WHO ARE THESE THREE GUYS? 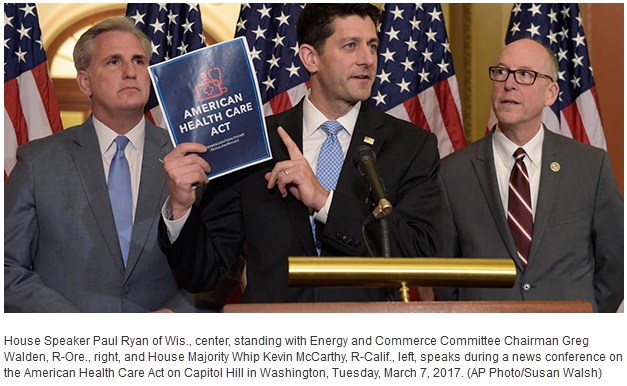 At the federal government level, the U.S. House of Representatives has the most impact on determining the direction domestic policy - not the President or the Supreme Court. And while the U.S. Senate participates equally with the House in approving legislation and budgets, House members usually set a course by voting first on budget matters and measures that impact the budget significantly.

Unlike the guys in the picture above, you probably have no trouble identifying the President of the Rust Belt in the photo to the left. That is because you have been taught in school and by the media that he's the most important man in the World. On the other hand, if you read the U.S. Constitution you may be surprised to learn that the only powers assigned by the Founding Fathers to the President with regard to domestic policy (which is established by laws adopted by Congress) are as follows:


He shall from time to time give to the Congress Information of the State of the Union, and recommend to their Consideration such Measures as he shall judge necessary and expedient; ...he shall take Care that the Laws be faithfully executed....

As it turns out, over the centuries Congress has adopted laws that give the President additional roles in the policy process. For instance, the current budget creation and spending implementation process was established by the Budget and Accounting Act of 1921, the Congressional Budget and Impoundment Control Act of 1974, and by other budget legislation.

The process of the President submitting a formal annual budget request to Congress was authorized by the 1921 Act adopted by Congress. While that shifted leadership momentum, that could be eliminated tomorrow by Congress (though it would probably require a veto override vote).

Looking at that picture at the top you probably had trouble identifying Representatives Greg Walden of Oregon and Keven McCarthy of California who are flanking House Speaker Paul Ryan. In fact even if you are a resident of Oregon or California you probably did not recognize either one. It is ironic that both had more influence on the details of the proposed American Health Care Act (AHCA) than the guy in the little picture above left whose activities the media (and maybe you?) pay attention to all the time.

The AHCA as written today would cost California $20 billion in federal subsidies lost that support healthcare for the working class and the poor. To replace that money, the State of California personal income tax revenue would have to be increased by about 25%. The voters of California would have to approve that. That would be resisted.

Still many are suggesting we "go it alone" with regard to healthcare policy by implementing a California "single-payer" plan.

Speaking of the voters, there was an election this week in the City of Los Angeles. About 11% of the voters turned out. Fortunately, the few that voted turned down a ballot measure that would have prevented development in a City already struggling with skyrocketing housing costs.

And they approved a measure that would fund modernization and expansion of public transit. Pushed by the reelected Mayor Eric Garcetti, the $121 billion transit initiative would fund hundreds of miles of new rail connections, bus-rapid transit lines, and robust bike infrastructure improvements over the next 40 years. But the plans would need ongoing additional transit funding from the federal government.

As explained in Hey Transit Fans: Worry About Congress, Not Trump:


...President Trump has threatened to defund any cities that refuse to cooperate with federal immigration authorities; L.A. remains a magnet for immigrants, and nearly one in ten people living in the county is believed to be undocumented. Though [Mayor Eric}Garcetti has refused to use the term “sanctuary city” outright, he has pledged to make “all Angelenos feel safe, secure and welcome in our community” and has criticized Trump’s travel bans and immigration policies. o accomplish his “signature initiative,” ...the mayor will need to negotiate a delicate relationship with the White House.

...Rather than anticipating retribution for clashing with Trumpian ideology, cities should just prepare for serious transit funding cuts in general. Unless longstanding federal formulas are changed, the threadbare Highway Trust Fund will still pass onto states a handful of dollars to be used for public transportation. But ... signature grant programs that have supported transit—such as TIGER and TIFIA—may get cut. After all, the Republican Party’s official platform calls for a total elimination of federal subsidies to public transportation.

Healthcare and public transportation are only a part of the Congressional budget iceberg threatening the California ship of state.

Over the next four years Congress will grin, accept, file, and consider the budget requests from the President as they always do. Those three guys in the picture above will not only determine what will happen to the President's requests, it will determine the future success of Garcetti's transportation vision and the future as envisioned by other California governmental leaders.

And things don't bode well for that future.

Literally, across California's state and local governments, there are billions of dollars of future infrastructure improvement and operational governmental expenditures that will be hampered if not eliminated by a lack of federal funding.

This will begin somewhat in the federal fiscal year that runs from October 2017 to September 2018. By the 2019-20 fiscal year, without significant leadership from California officials we may be looking at State and local budgetary chaos.

Unfortunately it may be the result of California Empirical Egalitarian Progressivism which has the goal of assuring the long term survival and success of California and Californians. Consider the desire to prevent Californians from dying unnecessarily because of lack of access to healthcare, a goal contrary to the Neoliberal ideology of the guys in the pictures above.

In June 2013 Governor Jerry Brown signed bills radically implementing Medicaid Expansion. That did away with many of the barriers that prevented people from enrolling in Medi-Cal by, among other things, eliminating an asset test for enrollees and allowing childless adults to enroll instead of forcing them to seek subsidized private coverage through Covered California, California's Obamacare health insurance exchange.

“The ACA has not been perfect, there have been challenges,” said Sabrina Corlette, a senior research professor at Georgetown University's Center on Health Insurance Reforms. But “if there was one state where it was really working well ... it was California.”

The state enrolled millions in Medi-Cal, and 13.6 million people — one in every three state residents — is covered by the program. Insurance premiums have not increased here as much as they have elsewhere, and the exchange still offers many options so consumers can shop around.

The percentage of uninsured working-age adults in California had dropped by more than half to 11% last year, according to federal data. Beyond signing up large numbers for coverage, state officials had also started improving the way medical care is delivered to patients, Corlette said.

When considering what the Affordable Care Act could accomplish, she said, “California was held up as the gold standard.”

Perhaps being one of only five Democratic states among the 50 should have made us a bit more cautious.

Being so Democratic in elections and policies, we sometimes forget that without California the U.S. voted Republican in the 2016 Congressional and Presidential elections. There is a certain irony that two of the three Republican Representatives pictured at the top are from California and Oregon, two of the five remaining Democratic states.

Maybe in the end we should "go it alone" but as discussed in #Calexit. Perhaps 170 years of invidious doubtful scorn is enough, not just on healthcare. 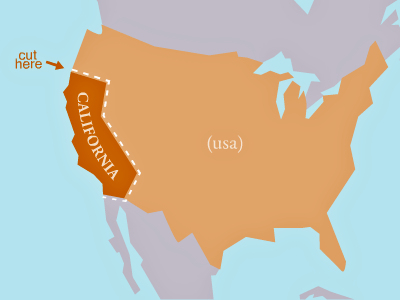