In California we are overcoming words that blind and bind: about lie, error, digital and information

An English language word-muddle-in-the-middle has evolved since the 1950's - it includes the words "lie," "error," "digital," and "information," each of which has been used in ways that create misunderstandings and cofusion.

What makes recent political debates befuddling to many is a muddling of the word "lie" for which Dictionary.com offers the following first definitions:


noun. a false statement made with deliberate intent to deceive; an intentional untruth.

verb. to speak falsely or utter untruth knowingly, as with intent to deceive.

Consider this Dictionary.com definition of the word "error":


1. a deviation from accuracy or correctness; a mistake, as in action or speech: His speech contained several factual errors.

2. belief in something untrue; the holding of mistaken opinions.

3. the condition of believing what is not true: in error about the date.

Accusing someone of lying is to accuse them of intent to deceive. If your goal is to make that person angry, then accuse them of lying before you know if they are just in error.

Unfortunately, when many people believe an incorrect statement, it can become a mass delusion whether spread by people who do so in error, or by those who do so as a lie "with intent to deceive."

In the context of these posts, climate change denial is being reinforced by large numbers of people who have repeated incorrect statements until it has become a mass delusion. This is reinforced by the iWorld, an artificial from which people create their mindset.


Consider this image. In which version of the world would you choose to live, the one at the top &nbsp
that is fed to the brain through "devices" or the one at the bottom that is fed to your brain when
your eyes and ears interact with the real world directly? If you rely on the device-created world,
you will not be able to adapt when the real world goes through upheaval. 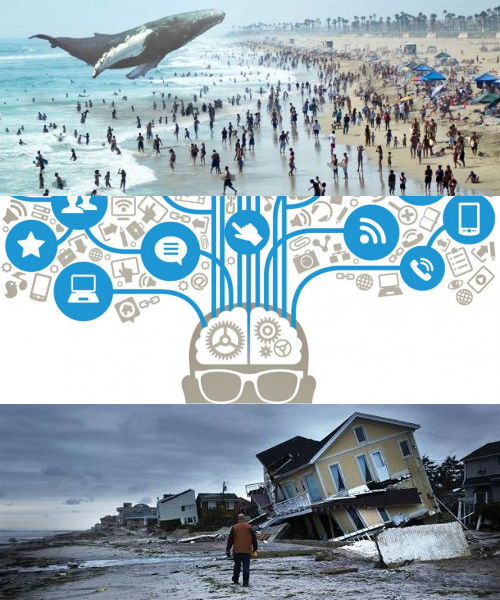 How we got here is a related "First World" delusion. Many would want to argue that we are in some Information Age or Digital Age.

But the words "information" and "digital" are deluding us because they are lies or errors when used in the context of "age."

The "digital age" is a mass delusion in which people living in the Industrial Age have expanded fossil fuel energy production (which powers their locomotives) in order to create and power some newer, smaller devices used to enhance data processing and communication. These people think they've changed the basic economic structure underlying their society when they haven't.

Powering "digital" equipment in use by 100+ people is basically the same as powering an 1880's coal-powered railroad steam engine pulling a line of passenger rail cars transporting 100+ people. It doesn't matter what tool you're using if you are using the same biosphere resources for energy.

The important difference is the urban users of devices on the internet do not directly experience coal smoke spread over their localized area, but instead on a far more massive scale they - well, really, you and I - generously share it with polar bears.

We didn't move into some new age called the digital age. It's still the Industrial Age but, yes, the equipment we use is smaller than a locomotive.

And now for the stunning 21st Century redefinition that changed it all.

The term "Information Age" was an acknowledgement when first used in the early 1980's of the proliferation of  improvements in computing power, meaning smaller, more "powerful", and less expensive personal computers, which were used to digitize and manipulate data.

We suddenly had ready access to - and the ability to share, store, and manipulate - "data" which I and others frequently termed as "information." Delighted with ourselves, we said we had moved into an "Information Age."

Indeed, more folks could make money from data. But we most certainly would have not declared a new "age" if we the choice had been "Data Age." That offers a dreary sound, meaning boring work. Even though that's exactly how the folks made money from data.

But when in 1980 we looked at dictionary definitions for the term "information" we read something like
The key term was "fact." A piece of data was, or more correctly digitally represented, some piece of fact. So in our view, "data" was "information."

When I and others were not paying attention, by the beginning of the 21st Century something happened to the word "information". And the "i" in information on the internet was turned into a ubiquitous symbol for "in" (as a determiner of whether you are cool and "in") by Apple in the era of Steve Jobs, the ultimate Neoliberal (though I don't know if he knew he was one).

As explained today by Wikipedia: "Information is any type of pattern that influences the formation or transformation of other patterns." Huh? Say what?

How absurd! The criteria to judge whether something uttered or written is "information" is whether it influences the formation or transformation of other patterns???

The absurdness is that informative or transformative "patterns" literally can be what we once knew as "misinformation." Except apparently now it is information!

Please note that I do not use the term "bad data" because "misinformation" can be created with no data at all!

Today there is no difference between fact or fiction so long as the words used are a "type of pattern that influences the formation or transformation of other patterns." They are lumped together as "information." The word "misinformation" has been discarded. In the context of this definition it doesn't matter if the pattern is untrue so long as it influences.

As one newspaper columnist noted: "Welcome to Donald Trump's America, where facts don't matter. Where it makes no difference whether or not what you say is true, as long as you say it loud enough." This, of course, gives Donald Trump way too much credit.

What the columnist is referring to is the iWorld in which information itself is "simulated," meaning it is digitally formatted by one or more persons to feel and look like realistic facts specifically to influence or reinforce the formation or transformation of another person's belief about the real world that surrounds them.

What's subtle here is an intended language muddle. Consider again that Wikipedia statement: "Information is any type of pattern that influences the formation or transformation of other patterns." Compare it with this also in Wikipedia:


Propaganda is "information, especially of a biased or misleading nature, used to promote a political cause or point of view". Propaganda is often associated with the psychological mechanisms of influencing and altering the attitude of a population toward a specific cause, position or political agenda in an effort to form a consensus to a standard set of belief patterns.

Propaganda is information that is not objective and is used primarily to influence an audience and further an agenda, often by presenting facts selectively (perhaps lying by omission) to encourage a particular synthesis or perception, or using loaded messages or "loaded language" to produce an emotional rather than a rational response to the information that is presented. Propaganda is often associated with material prepared by governments, but activist groups and companies can also produce propaganda.

Using these definitions, "propaganda"  is defined as "information" - which is defined as any type of pattern that influences the formation or transformation of other patterns - which is nearly identical to the goal of "propaganda" which is to influence and alter "the attitude of a population toward a specific cause, position or political agenda in an effort to form a consensus to a standard set of belief patterns."

The center of the iWorld is in California where billions of dollars are made on technology, TV, and movies all designed specifically to pull people out of the real world. But the original intent was to provide short term entertainment ... yes, escapism, but not to live outside the real world in the iWorld.

The iWorld.  Embraced by Donald Trump.  Effectively used by the Neoliberals, who we can now discuss.
Posted by Michael O'Faolain - at 4:32 PM