While it probably would not come as a surprise to many Californians, the folks in Venice and the Netherlands have serious programs under way to adapt to the sea level rise, programs to mitigate the regional impacts of the disruption of the biosphere also known as "climate change."

Obviously, whether you're a Venetian along the canals of Venice or among the Dutch protected by the dykes, dunes, and dams of Holland, you switched off the volume of any Neoliberal-style ignorant debate that may have led to you and your grandchildren drowning. You are proceeding with plans to adapt.

So are the people of the State of California, even to the extent that voters have approved special taxes to start the adaptation process.

Since 2009 pursuant to its Integrated Plan for Addressing Climate Change, California has made significant progress partnering and collaborating with other states, countries and jurisdictions interested in reducing air pollution and greenhouse gas emissions. California even adopted it's own complex policies like cap-and-trade. The logo to the left above links to the official website providing an extensive explanation of the state program.

California has done this despite the misuse of words that have created confusion and permitted obfuscation surrounding the issue officially named "Climate Change" which name itself can be misleading.

So far we've been able to do it by ignoring the discussion at the national level that has become so confusing and that has been targeted by economic interests for deliberate, ongoing obfuscation. Let's take a look at the word problem that permits this obfuscation of the discussion around intelligent regional adaptation to the disruption of the biosphere. Consider these definitions: 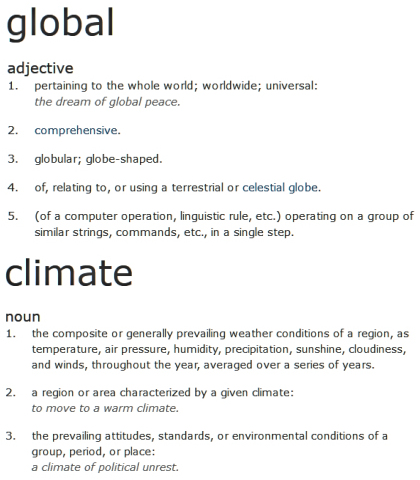 So is it "global" warming, meaning warming pertaining to the whole world universally? Or is it "climate" change meaning differing weather conditions of a region?

Science should be precise, right? But it has been confusing. What is it all about because they've been telling us about it for 65 years?

The "Climate Change" (with capital first letters) discussion has been confusing. When it began in the 1950's it was referred to as "climate change" though, yes, the discussion mostly was about temperatures.

Then in 1975 a scientific paper was published titled Climatic Change: Are We on the Brink of a Pronounced Global Warming?  This caused...
...to start discussing "global warming." Unfortunately this resulted in most everyone else arguing about "global warming" for awhile.

Why would there be any confusion? Was it just because everyone trying to warn us about something was communicating in some odd dialect?

The problem is that any reasonable Average Jolene standing knee deep in snow in the Rust Belt because of the worst snowstorm she's ever seen is going to puzzle over the term "global warming." Her part of the globe isn't warm at all. So just maybe "global" was the wrong word to use because it's definition (see above) carries a "universal" element.

The climate may be changing, and if you tell Jolene that it is she might believe you. But if you tell her about the climate warming while standing in that record deep snow, she's going to recognize you for being the communications incompetent you are. It may be that her region's climate isn't really warming even if it is changing.

After all "climate" means "the composite or generally prevailing weather conditions of a region, as temperature, air pressure, humidity, precipitation, sunshine, cloudiness, and winds, throughout the year, averaged over a series of years." 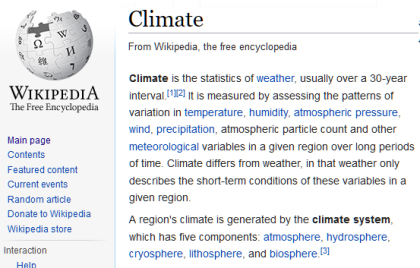 To be precise, there is no global, universal warming affecting everywhere the same.

Consider a recent article - Climate change may shut down a current that keeps the North Atlantic warm - telling us a 44 percent chance exists that by the year 2300 we might have frigid winters for countries along the North Atlantic all because of global warming.

It's not the first time scientists have argued that the Gulf Stream, together with its northern extension towards Europe, the North Atlantic Drift, could be disrupted by Climate Change causing a significant temperature drop, maybe even a mini-Ice-Age in the North Atlantic region because of a rise in the the average temperature in the Earth's lower atmosphere. And in the 1970's there was serious discussion of global cooling.

Say what? A mini-Ice-Age because of Global Warming? Or is it Climate Change? Does anyone see a language problem here assuming the goal is to communicate with all the folks that vote as opposed to America's academics and illuminati?

In this case, I believe Mr. Trump was honestly reflecting what he believes about Climate Change - "It's not something that's so hard and fast." And why wouldn't he believe that, as he's right! And his view is constantly reinforced in the iWorld in which he clearly lives like so many Americans.

To understand how befuddling this can be for the average American, let's turn to medical science for an analogy. Consider the information faced by a 22-year-old-woman without children who has received a genetic test telling her she inherited a "faulty" BRCA1 gene, the gene Angelina Jolie made a center of controversy.

The test result means that 22-year-old-woman without children has up to an 80% risk of developing breast cancer by age 90 plus a high risk of ovarian cancer which has an extremely high death rate. In many women with the genetic problem, cancer never develops. In many it develops before age 40.

Does the 22-year-old-woman without children take preventative action now by having her breasts and ovaries removed? Or does she act now by having children as soon as possible? Or is she confronted with probabilities that offer no concrete information?

A number like 80% risk by the year 2084 is most certainly for her "not something that's so hard and fast" (to use Trump thinking about Climate Change).

Maybe she can have children first, maybe even wait until she's in her 30's. She can study the information on the internet, the iWorld, which recently includes contrarian information that seems to be telling her the numbers and the risks may not even be that clear - you know, not so hard and fast.

She can live her life, and study ... until she can't because she has a cancer diagnosis and dies within a few months.

Or maybe she can study until she dies of old age from heart problems.

It's all fuzzy. "It's not something that's so hard and fast."

And that's the same problem that appears to be confusing most Americans regarding regional climate change. (Note that from this point on I will not be capitalizing the first letter in words like "climate" except in quoted material.) However, in the case of regional climate change, too many are confusing the greatly studied 1970's "gene test result" reported to them by Al Gore with "yesterday's cancer diagnosis". Because we already have the diagnosis, we just try to forget.

Yes, the regional climate change situation actually can be likened to a terminal cancer diagnosis. "Yeah, I'm feeling some effects, but how long do I have, doc?" The answer to this question further befuddles people,

In the case of cancer, you might get an answer ranging from "weeks" to "two years." And it's possible there are treatments that can slow it down. So even that is not "so hard and fast."

In the case of regional climate change, it's "not something that's so hard and fast" because scientists are offering estimates of damage and dislocation along with time frames that vary from 3 years to 300 years; such as a possible sea rise of a couple of feet to 40 feet.

And as we've already have seen storms and drought and wildfire effects will vary, and maybe there's a 40% chance of a mini-ice-age in Europe and North America in 200 years. And it's even possible that actions still could be taken to mitigate the effects to some degree which justifies spending a gazillion taxpayer dollars and seriously downgrading our lifestyle.

Yeah. This is how to create a discussion that ordinary people will tune out. This is not the way to discuss the important data scientists are recording. We need to begin with correct, effective language.

When one talks about "climate" issues, the language should reflect the thinking reflected in the introductory sentence from the 2015 Climate Change Research Plan for California (emphasis added):


Over the past 25 years, the State of California has demonstrated national and international leadership in understanding regional climate change impacts, developing strategies for reducing greenhouse gas (GHG) emissions, and developing knowledge to support adaptation to projected impacts.

Most of the Plan's focus acknowledges that climate change is regional even within California. That's because disruption of the biosphere does not result in uniform changes.

With that said, we need to review both what's happening to the biosphere and California's adaptation plans.
Posted by Michael O'Faolain - at 4:34 PM