Our Irish and French Catholic great-grandparents: Reflections on multiculturalism and the Alt Right

Thanks to Donald Trump, many Americans are learning about the so-called "Alt-Right" or Alternative Right for the first time.

In summary it is a political philosophy that embraces American Ethnic Eurocentric Nationalism. It not quite as narrow minded in definition regarding which peoples are "acceptable" to real Americans as was the case in various periods between 1800 - 2000.

Nonetheless the 2016 Alt-Right advocates legal discrimination based on ethnicity and race. And their views have been almost fully incorporated into American law in a reprehensible way, though most Ethnic European-Americans don't know about the facts because they don't scroll across internet cat videos.

Or course, we both have family trees that contain pre-Revolutionary War protestant immigrants that came from Europe, descendants of which were undoubtedly among those who hated the Catholic immigrants as indicated in these images from years past: 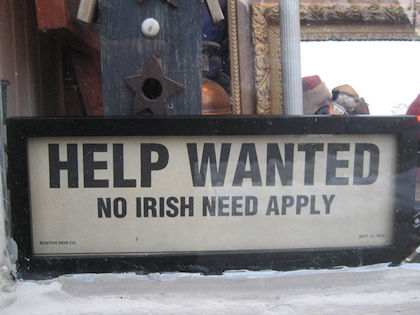 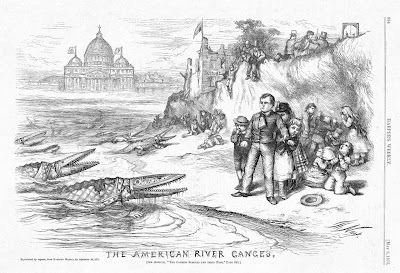 In other words, we're typical white Americans - all members of immigrants' families according to our family trees.

It's just that now its ok to have any kind of European ethnic background. That's the level of progress we've made as of the beginning of the 21st Century.

Before going any further, we need to define certain words as I use them rather than confuse my meaning with those words as other folks are throwing around as if that they fully understand:
"Bigotry" is tough to get rid of. The word's origin is from the French  bigoterie meaning "sanctimoniousness."

You may think you're free of bigotry. But consider that even though "democracy" is a concept that literally means "government rule by the people", one's belief that democracy is the ideal form of government compared to all other forms of government would be considered a belief in an ideology.

"Prejudice" is something almost no human can avoid. If you think you don't ever "prejudge" based upon appearances you likely are delusional. You just can't consider eating insects - it's eewww. It's a preconceived opinion that is not based on reason or actual experience.

"Discrimination", on the other hand, is a behavior and it can be avoided. But Americans not only doesn't avoid it, as a society we practice it with institutional vigor.

Let's return to the Alt Right or Ethnic Eurocentric Nationalism. The basics are described in What’s the alt-right? A primer. After you've read it, you likely will have a problem. Can you remember the definition of bigotry - the stubborn and complete intolerance of any creed, belief, or opinion that differs from one's own?

In the linked article (which you should read), a number of Alt Right advocates are listed. Consider carefully this description:

An influential conservative thinker cast out of the movement's mainstream — and fired from his Washington Times column — for speaking at the 1994 American Renaissance conference. Subsequently, he became a sort of martyr for nationalist writers and thinkers. Throughout his career, he argued that cultural liberalism was not as popular or inevitable as its promoters claimed.

"Whites need to form their racial consciousness in conformity not only with what we now know about the scientific reality of race but also with the moral and political traditions of Western Man-White Man," Francis wrote in 2005. "The purpose of white racial consciousness and identity is not simply to serve as a balance against the aggression and domination of other races but also to preserve, protect, and help revitalize the legacy of the civilization that our own ancestors created and handed down to us, for its own sake, because it is ours, and because, by the standard of the values and ideals we as a race and a civilization have articulated, it is better."

The article says that the Alternative Right "has been seeping into American politics for years as a far-right option for conservatives." But that is the view of young political wonks. In fact in one form or another Ethnic Eurocentric Nationalism has been seeping out of the American populous for over two centuries.

It can be different.

Despite the Statue of Liberty bronze plaque... 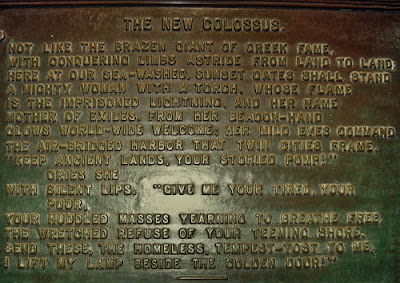 ...the United States at no time has made it a human right to migrate into the country. Indeed, most countries have not.

But at the beginning of the 21st Century, the country of Argentina adopted a law that reads as follows:


The right to migrate is essential and inalienable to all persons and the Republic of Argentina shall guarantee it based on principles of equality and universality.

In fact, Argentina's Law 25.871 is broader in scope than the International Convention on the Protection of the Rights of All Migrant Workers and Members of Their Families, the principal international human rights migration treaty, of which Argentina is a signatory.

What you should know regarding the International Convention on the Protection of the Rights of All Migrant Workers and Members of Their Families is that no migrant-receiving state in Western Europe has ratified the Convention. The United States is not even a signatory that has yet to ratify just as Americans would prefer.

Immigration detention in the United States began in 1890s at Ellis Island and after 1924 Ellis Island became primarily a detention and deportation processing station. Mandatory detention was officially authorized by the federal government in 1996 with the enactment of the Antiterrorism and Effective Death Penalty Act (AEDPA) and the Illegal Immigration Reform and Immigrant Responsibility Act (IIRAIRA). From 1996 to 1998, the number of immigrants held in detention at any one time increased from 8,500 to 16,000. and by 2008 this number increased to more than 30,000.

In fact, if one examines the incarceration statistics for our own citizens... 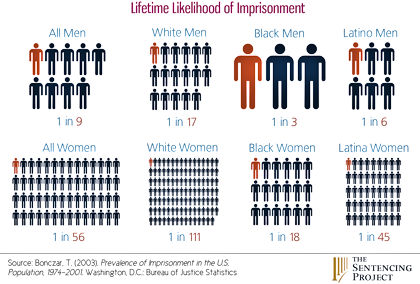 ...in the context of also considering our detention of immigrants, one really might think that some of the Alt Right ideology of embracing Ethnic Eurocentric Nationalism has already been implemented by Democrats and Republicans alike.

If a visitor from space checked out Germany in 1942 and then returned to the U.S. 75 years later as part of a study of human progress, it might conclude that at least white humans have more or less reduced the systematic mass killing of races and ethnic groups we don't like, but we are still putting them in prisons in the highest possible numbers we can get away with. The space visitor would see videos like this but then it's from the BBC:


Unfortunately, that space visitor would be right with regard to culturally Eurocentric Americans, which includes most of us white folks not in prison. In fact one might almost think the Alt Right represents our dominant ideological view based upon our prisons-for-non-whites and immigration detention systems.

Golly, an objective look at the institutions of government across the United States by that space alien might easily lead to the conclusion that elected government officials in the United States have continued to work hard to contain multiculturalism in line with Sam Francis' articulated values:


The purpose of white racial consciousness and identity is not simply to serve as a balance against the aggression and domination of other races but also to preserve, protect, and help revitalize the legacy of the civilization that our own ancestors created and handed down to us, for its own sake, because it is ours, and because, by the standard of the values and ideals we as a race and a civilization have articulated, it is better.

So where is all this expansion of 'multiculturalism" that the Alt Right and Donald Trump want us to fear??? We've been electing people who have been doing just fine locking up in cages all those folks we don't like.
Posted by Michael O'Faolain - at 10:57 PM