IMF: Far-reaching in your life but not on your list of chat acronyms 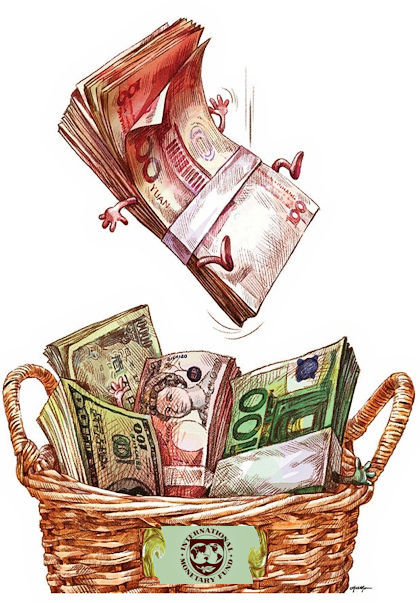 If you are a Trump or Sanders supporter, you thoughtfully formulated your opposition to the TPP based upon the assumption that the IMF adding the Renminbi to the XDR effective October 1, 2016 does not need to be countered to maintain the American competitive position in international trade, particularly in Asia and Latin America.

More likely if you are an American you have no idea what that caption says.

President Richard Nixon is "remembered" by most in the American news media (and therefore by the American public) for Watergate which at the time seemed very important but today seems almost irrelevant.

A few remember that Nixon opened China by recognizing the Chinese People's Republic, perhaps the most immediately important decision of the Nixon Administration.

But almost no one remembers what was the Nixon Administration's most important decision for the long term.  From Wikipedia:


The Nixon shock was a series of economic measures undertaken by United States President Richard Nixon in 1971, the most significant of which was the unilateral cancellation of the direct international convertibility of the United States dollar to gold.

Unless you are among the 0.001% of Americans who hang out in a university economics department or are at least somewhat of a monetary policy wonk, you will find this Wikipedia "Nixon shock" entry discussion mystifying:


The current world monetary system assigns no special role to gold; indeed, the Federal Reserve is not obliged to tie the dollar to anything. It can print as much or as little money as it deems appropriate. There are powerful advantages to such an unconstrained system. Above all, the Fed is free to respond to actual or threatened recessions by pumping in money. To take only one example, that flexibility is the reason the stock market crash of 1987—which started out every bit as frightening as that of 1929—did not cause a slump in the real economy.

While a freely floating national money has advantages, however, it also has risks. For one thing, it can create uncertainties for international traders and investors. Over the past five years, the dollar has been worth as much as 120 yen and as little as 80. The costs of this volatility are hard to measure (partly because sophisticated financial markets allow businesses to hedge much of that risk), but they must be significant. Furthermore, a system that leaves monetary managers free to do good also leaves them free to be irresponsible—and, in some countries, they have been quick to take the opportunity.

Debate over the Nixon Shock has persisted to the present day, with economists and politicians across the political spectrum trying to make sense of the Nixon Shock and its impact on monetary policy in the light of the financial crisis of 2007–08.

The 2007-08 financial crisis could become known as the warning that was ignored by the world's democracies. It resulted in a significant "employment depression" in the United States that did not readily respond to the monetary machinations set in place by Nixon.

Unfortunately, democracies are nations where in 2016 most voters know something about Pokémon Go and nothing about the "currency basket" known as the International Monetary Fund special drawing rights (XDR). 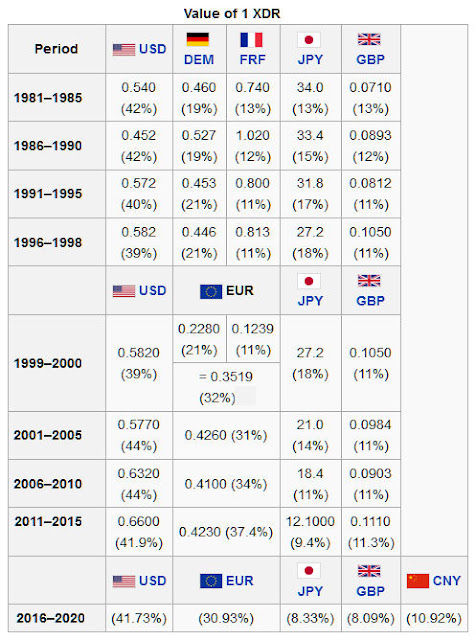 What this chart shows is that the IMF's XDR basket started out made up of U.S. Dollars, West German Marks, French Francs, Japanese Yens, and British Pounds.

In 1999 the Marks and Francs were replaced by Euros.

In terms of how the IMF basket is divided up, since the Euro and the Pound made space for the Renminbi prior to anyone talking about a Brexit vote, shifts in the World's economy that include "Third World" countries deciding what currency will benefit them the best over next six years now that the Renminbi is a viable option could be ... interesting?

The growing strength of China in the World economy, particularly in Third World economies, as represented by the necessary change in the basket composition, was to be somewhat countered by the Trans-Pacific Partnership trade agreement (TPP) among twelve Pacific Rim countries - Australia, Brunei, Canada, Chile, Japan, Malaysia, Mexico, New Zealand, Peru, Singapore, the United States, and Vietnam - finalized February 4, 2016, after seven years of negotiations.

Notice that China was not a participant in the TPP. That's because it was intended to counter China's growing influence in the international economy, particularly in Asia and Africa.

Apparently Donald Trump and Bernie Sanders favor increasing the strength of China as they oppose the TPP.  (They could be cynically lying to gain the votes of the uninformed American voter.)

They were so successful in convincing the left and right that the TPP must be defeated that Hillary Clinton, the only 2016 Presidential candidate likely to understand the nuances and complexities of the TPP that would counter China, was forced to embrace opposition to the TPP.

And thus the American voters on the left and the right have come together in huge numbers to further the long term ascension of China within the World economy as desired by Donald Trump and Bernie Sanders.

Or, more likely, most think IMF, XDR, and TPP are just some unfamiliar texting and chat acronyms and don't realize just how important all this is in their lives - how it affects the cheap food, clothing, furniture, and electronics they buy from Third World countries as facilitated by the 1976 Jamaica Accords restructuring the IMF system - and how far-reaching the impact of the failure of the TPP could be for them in less than a decade.


Footnotes:
1The renminbi is the official currency of the People’s Republic of China, and translates to “people’s money.” Its international symbol is CNY (or CNH in Hong Kong; but abbreviated RMB, with the symbol ¥). The yuan is the name of the unit in which renminbi transactions are denominated, but also refers to the currency generally. This has been likened to the pound sterling, which is the name of the British currency, though no one in Britain would ask you for three pound sterlings for a pint of beer,  but rather for three pounds.