Will Queen Elizabeth II reign over the breakup of the United Kingdom?

Click on image to see a larger, more detailed version! 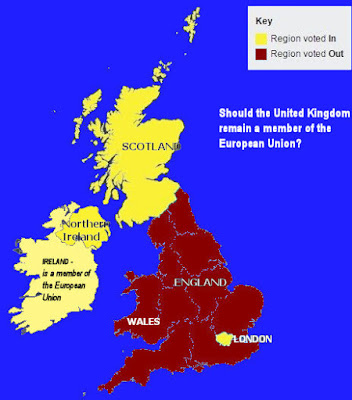 To many Londoners the "Brexit" vote results, 52% voted to get out of the European Union while 48% voted to remain in, are a shock. But what's already being proposed will be an even greater shock.

In 2014 the Scottish Government held a referendum on Scottish independence, with 55% of voters rejecting the independence proposal and opting to remain within the United Kingdom. But since then the pro-independence Scottish National Party (SNP) has surged, winning several elections.

EU membership was one of the key issues in 2014, with those campaigning for Scotland to stick with the United Kingdom arguing that an independent Scotland would not be able to remain a member of the bloc.

Scotland's First Minister Nicola Sturgeon said today many Scots who had voted against independence for that reason were now re-assessing their decision. In the Brexit vote, 62% of the voters in Scotland voted to remain in the European Union.

Sturgeon said she will seek powers to hold a new independence vote because of her desire to keep Scotland in the European bloc. The popular leader said she was keeping a promise made by the Scottish National Party to consider a second independence vote "if there was a significant and material change in circumstance" from that which prevailed in 2014, such as Scotland being taken out of the EU against its will.

Sturgeon stated,"I think an independence referendum is now highly likely, but I also think it's important that we take time to consider all steps, and to have the discussions, not least to assess the response of the European Union to the vote that Scotland expressed yesterday. I am absolutely determined in my responsibility to give effect to how Scotland voted yesterday."

"The Scottish government should immediately begin talks with the EU for Scotland to remain a member, even though the rest of the UK may exit, and to clarify that an independent Scotland would be the continuing member state, inheriting the UK's EU membership in the event of a 'Yes' vote in a Scottish independence referendum," said Gordon MacIntyre-Kemp, chief executive of Business for Scotland, a business network and business and economic policy think tank which seeks to give a voice to business people who support Scottish independence.

Thursday's referendum vote in Northern Ireland had 56 percent of Northern Irish voters choosing to remain in the EU.

In Northern Ireland, Deputy First Minister Martin McGuinness of Sinn Fein, an Irish republican political party dedicated to the reunification of Ireland and an end to British jurisdiction in the north of Ireland, called for a vote to leave the U.K. and unite with Ireland, an EU member.

"The British government now has no democratic mandate to represent the views of the North in any future negotiations with the European Union, and I do believe that there is a democratic imperative for a 'border poll' to be held," McGuinness said today.

The problem is Northern Ireland's present devolved system of government is based on the Good Friday Agreement. The Agreement acknowledged:
Both of these views were acknowledged as being legitimate.

The agreement reached was that Northern Ireland would remain part of the United Kingdom until a majority of the people of Northern Ireland and of the Republic of Ireland wished otherwise. Should that happen, then the British and Irish governments are under "a binding obligation" to implement that choice.

Despite the statements of the Deputy First Minister, Speaking on BBC Radio Ulster, First Minister Arlene Foster, Leader of the Democratic Unionist Party, rejected Sinn Fein's call for a unification vote. The DUP was the only major party in Northern Ireland that backed the Leave campaign.

"Our nation has made a clear definition as to where they want to go. They backed hope, they backed aspiration, they backed the future potential of the United Kingdom and I am very pleased with the result." Foster said.

"We always knew that it was going to be difficult to get a Leave vote in Northern Ireland given that four out of five main parties were advocating a Remain vote and actually it was only my own party that was advocating a Leave vote."

Foster's father was a Royal Ulster Constabulary reservist during "The Troubles" and she was involved in  Ulster Unionist Party since college. She may very well be unable to prevent an Irish unification vote, particularly with her making reference to "our nation" wanting to leave the EU.

Sinn Fein already has their website set up for advocating for a vote offering this headline on its front page: Now is the time for a United Ireland, pledge your support, become an online supporter.

The United Kingdom is a constitutional monarchy.  Its capital city is London, an important global city and financial center with an urban population of 10,310,000, the second-largest in the European Union. London voted to remain in the EU while the rest of England voted to leave.

The current monarch — since February 6, 1952 — is Queen Elizabeth II. It is ironic that in the 65th year of her reign - the longest reign in British history - the breakup of the United Kingdom could occur.
Posted by Michael O'Faolain - at 10:19 PM