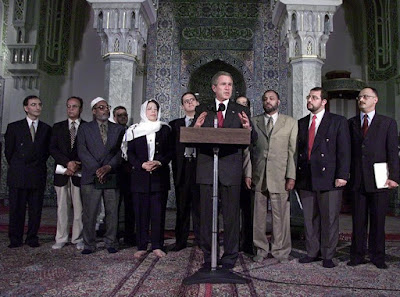 How to be Presidential: President George W. Bush speaking at the Islamic Center of Washington, D.C on September 17, 2001.

Following the Orlando shooting incident, Donald Trump is attacking President Obama and Hillery Clinton because they don't call such terror attacks "radical Islamic terrorism." In doing so, Donald Trump is attempting to redefine what was established by President George W. Bush as "Presidential" behavior.

By clearly insisting that we identify a criminal with a religion, Donald Trump and his blustery, dangerous supporters have apparently rejected the very strong position taken by former President George W. Bush after the September 11, 2001, terrorist attacks. President Bush understood that fanning the flames of religious discrimination isn't Presidential, it is purely ignorant bigotry.

During remarks given at the Islamic Center of Washington, D.C on September 17, 2001, Bush assured Americans that attacks committed by Al Qaeda were not representative of the Islamic faith: "The face of terror is not the true faith of Islam. That's not what Islam is all about. Islam is peace. These terrorists don't represent peace, they represent evil and war."

In his September 20, 2001, address to a joint session of Congress, Bush again made clear that the terrorists who attacked the United States "practice a fringe form of Islamic extremism that has been rejected by Muslim scholars and the vast majority of Muslim clerics -- a fringe movement that perverts the peaceful teachings of Islam." Bush spoke directly to the difference between extremist terrorists and Muslims: "I also want to speak tonight directly to Muslims throughout the world We respect your faith. It's practiced freely by many millions of Americans, and by millions more in countries that America counts as friends. Its teachings are good and peaceful, and those who commit evil in the name of Allah blaspheme the name of Allah. (Applause.) The terrorists are traitors to their own faith, trying, in effect, to hijack Islam itself. The enemy of America is not our many Muslim friends; it is not our many Arab friends Our enemy is a radical network of terrorists, and every government that supports them."

On November 6 2001 President Bush delivered remarks to the Warsaw Conference on Combating Terrorism during which he stated: "All of us here today understand this: We do not fight Islam, we fight against evil."

Today in a news conference, the FBI Director James Comey offered information that indicates the Orlando shooter
Ignorant and crazy.

What's worrying is that would describe Trump's attempt to redefine how to be Presidential in responding to incidents like this. George W. Bush got it right, Barack Obama embraced Bush's approach, and Clinton intends to continue that approach. It's how to be "Presidential."

What we know is that Donald Trump is ignorant and crazy, not Presidential material. And his bigotry is as dangerous as the anti-gay bigotry of the Orlando shooter.
Posted by Michael O'Faolain - at 10:35 AM