"The Woman Card" - Donald plans to beat Hillary with 2004 strategy 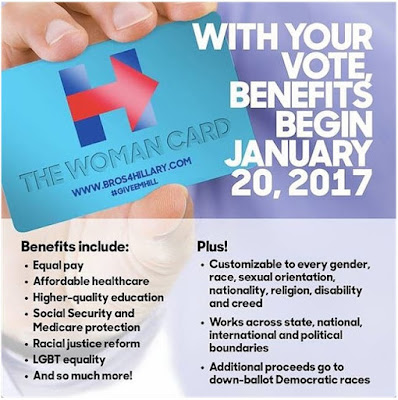 In typical Donald Trump fashion, after making his foreign policy speech he sidetracked the media by going all in to overcome his greatest political weakness - women voters - using a 2004 Republican strategy and Bernie Sanders foreign policy rhetoric.

Examples of headlines today include Trump doubles down on Clinton and ‘the woman card’ and Trump hits Clinton on the 'woman's card,' again, the latter story explaining:


The Republican front-runner's remarks came two days after he first played the "woman card" card in a speech following Tuesday's primaries, when he said that Clinton wouldn't get 5% of the vote were she a man.

On Thursday, Trump told [Today Show] hosts Matt Lauer and Savannah Guthrie over the phone that “without the woman’s card, Hillary would not even be a viable person to even run for city council positions."

Trump's assertion that women voted for Clinton because she's a woman appeared to be countered seconds later by Trump himself, when Lauer asked Trump if women voted based on gender.


“Frankly, if Hillary Clinton were a man, I don’t think she’d get 5 percent of the vote. The only thing she’s got going is the woman’s card,” Trump said in a news conference at Trump Tower. “And the beautiful thing is, women don’t like her.”

That was a significant expansion of Trump’s by-now-familiar claims that Clinton is unqualified — and one that made New Jersey Gov. Chris Christie’s wife, standing behind Trump before the TV cameras, appear to grimace.

It also crystallized the question of how the nation will reckon with its first presidential election between a man and a woman. What was once subtext — latent sexism in American life and the question of what is and is not off-limits when contemplating a woman as commander in chief — is now a full part of the political conversation.

Donald intends to use what he knows were Sanders' strongest attacks on Clinton to beat her, such as:


"I worry," Sanders said at a debate in December, "that Secretary Clinton is too much into regime change and a little bit too aggressive without knowing what the unintended consequences might be."

Trump will combine the anti-Clinton-incompetent-on-national-security issue made an irrational favorite by Sanders with what he rightly or wrongly believes about women: "I think they vote for security."

The best article on the subject was Wooing mom by columnist Kathleen Parker which appeared in many newspapers across the country and told us:


What women want, apparently, is to be safe. In post-Sept. 11 America, the group of swing voters formerly known as "soccer moms" has morphed into "security moms" - mostly white, married women with children who worry first about national security.

In other words, in a trend that Freud doubtless would find unsurprising, women are looking to their leading man for protection. It is, after all, a jungle out there.

Thus far, polls show Bush leading among such women, which is causing headaches for the Kerry campaign. In recent years, women reliably have voted Democratic, as in 2000, when 54 percent went for Al Gore.

But 9/11 really did change everything, including women's idea of an alpha male.

The Trump camp is counting on winning the male vote by a margin 60±%, but know they really can't win the election unless the women vote margin for Clinton is less than 53% . The security issue worked in 2004. Kathleen Parker explained it all for Donald:


"It's just a feeling, a comfort level," Dina Murphy, a New Hampshire mother who voted Democratic the past three presidential elections, told the on-line newspaper telegraph.co.uk. "I trust Bush more to lead our country."

When it comes to hearth and home, females vote their ovaries. It's the nest, dummy.

On a deep-brain level, mothers want what they dare not utter aloud in a culture that pretends the sexes are the same. They want a man to protect them and their helpless offspring. And the alpha male will be recognized on a level too primitive to be measured by polls.

Oh, by the way, those tremors you feel? Don't be alarmed. It's just the hate-Daddy Metro crowd stamping their feet in protest. This is not an unexpected response when long-buried truths bubble to the surface. It will pass. Sometimes they just need a nap. Meanwhile, as campaign strategists try to paint a portrait of their candidate as the more intellectual, or the smarter strategist, or the morally superior man, or the more nuanced or the tougher hombre, they're missing the point. The real issue in the post-9/11 dating game is simple: Which is the truer man?

In a response to this viewpoint in the Washington Post Play the ‘woman card’ and reap these ‘rewards’! by Alexandra Petri the logical reasons for women supporting Hillary over Donald are offered:

I have been carrying one of these for years, proudly.

It is great. It entitles you to a sizable discount on your earnings everywhere you go (average 21 percent, but can be anywhere from 9 percent to 37 percent, depending on what study you’re reading and what edition of the Woman Card you have.) If you shop with the Woman Card at the grocery, you will get to pay 11 percent more for all the same products as men, but now they are pink.

Show the Woman Card to your health-care provider and you will enjoy new limits on your reproductive rights, depending on what the legislators of your state have decided is wise. Get ready to have a lot of things about your body explained to you!

The Woman Card entitles you to constant scrutiny and judgment from all corners at all times, whether you asked for it or not. Try talking! Or rather, don’t.

In November women voters will determine whether Trump becomes President instead of a well-qualified woman, we bros4hillary notwithstanding. In the meantime Bernie will continue his efforts on behalf of Trump's plans: 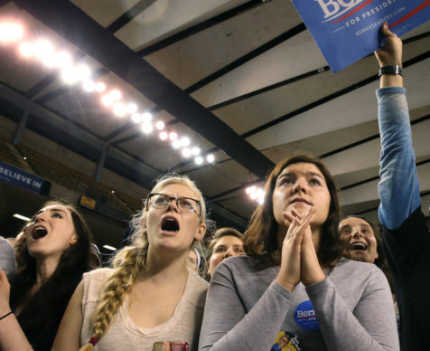 It's hard to believe these women would elect Donald either through action or inaction, but it's possible.
Posted by Michael O'Faolain - at 1:28 PM