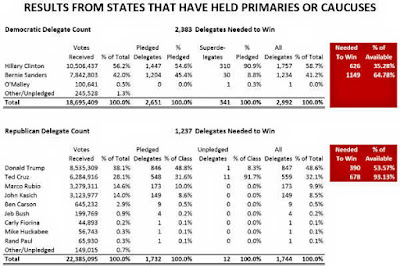 When you start hearing politicians complain about the rules, you know you'd better check on what is actually happening. The Donald Trump and Bernie Sanders campaigns have been complaining about how unfair the delegate selection process is in their respective parties.

So I checked. Admittedly it is difficult to get actual accurate numbers. But doing the best I could, the table above reflects what I discovered (you can click here or on the table to see a larger version).

In the states in which primaries and caucuses have been held to date, Bernie has received 42.0% of the vote and has 41.2% of the committed delegates from those states, including his superdelegates. So overall, he doesn't have much to complain about to Democratic Party officials.

What he has to worry about is that to win the nomination of the first ballot at the Democratic Convention Hillary only needs 35.28% of the delegates and superdelegates from the states which will hold primaries and caucuses between now and August.

In the states in which primaries and caucuses have been held to date, Donald has received 38.1% of the vote and has 48.6% of the delegates from those states. So if anything, he ought to shut up about it.

But his problem is to avoid a contested Republican Convention - he has to win 53.57% of the delegates from the states which will hold primaries and caucuses between now and August.

The reality is that absent some news devastating her campaign, Hillary will likely get the 35.28% of the delegates she needs. On the other hand, Donald may not get the 53.57% of delegates he needs as he has fallen short of winning 50% of the delegates in every state but his home state of New York.

In both the Democratic and Republican Parties, the 50 states and various other locales have created a mishmash of rules for selecting convention delegates. But there is no system that would be considered perfect by everyone.

On the face of it, party primary elections conducted by the states seem the way to go. But the first question you run into is who should be allowed to vote in a party's primary?

Independents complain that they should be allowed to vote in the party primary of their choosing on election day. After all, it is the state that's holding the election.

But the parties are private organizations that depend on their membership for success. So party officials set rules to exclude everyone but voters registered in their party in some states.

So many states have taken note that the parties are private organizations and don't pay for primary elections. Many party purists like this. They prefer to hold party caucuses around their states. The question is who gets to participate in these gatherings?

Usually they are limited to persons registered to vote in the party. In some states, you can register to vote when you walk through the door which seems pretty open.

The other question is when do you hold these caucuses? One assumption is that a day and time should be selected to facilitate the best turnout. But people have forced their states to hold elections over several days at a time, have mail in ballots, and are talking about online voting. This has happened because so many of our citizens now work retail with shifts covering 24 hours/7 days a week. Is it even possible to hold a fair caucus event in a period shorter than a week?

Then there is all those rules created by locals in all those 50 states, territories, the District of Columbia, and some place called "Democrats Abroad" in the Democratic Party

Nonetheless, we Americans do seem to fumble our way through all this. I don't like it any better than anyone else. But it's hard to disagree with Republican National Committee Chairman Reince Priebus who last week stated on CBS’s “Face the Nation”:


“The RNC doesn’t have the authority to change the rules even if we wanted to, and each candidate has to know the rules, learn the rules, and abide by the rules and ultimately the majority will decide everything [at the Convention in August]."

The simple statement is "quit your beefing."

Finally when it comes to Sanders and his supporters, please quit finding excuses and particularly stop dismissing those who have voted for Hillary.

It is no wonder that a high-profile group that includes the Democratic Party chairs of South Carolina, Louisiana, Florida, Georgia, and Mississippi sent a letter expressing its concern about his characterizations of the South, which they contend “minimize the importance of the voices of a core constituency for our party”: African-Americans.

Click here to download the letter which is far more courteous and thoughtful than anything I would have said to Sanders. Bigotry is bigotry. Just because some white Southerners don't conform to your behavioral expectations is no reason to dismiss Democrats who live in the South who chose to vote for your opponent.

Oh, and quit your beefing.
Posted by Michael O'Faolain - at 4:21 PM