When I was preparing this update... 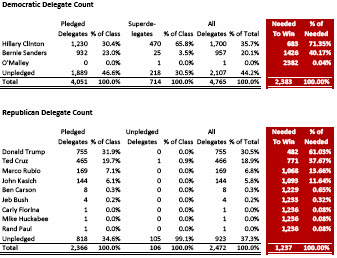 ... I discovered something I really did not understand.

The Democratic Party Caucus system used in some states is fundamentally undemocratic.

Fact 1. This coming Saturday, March 26, for 2± hours beginning at 10:00 am at a designated location for each precinct, Washington residents can gather at the caucuses, they can caucus and then they can vote. There is a caucus for each of the state’s roughly 7,000 voting precincts, which have an average of 564 registered voters apiece. Many precincts join together for caucuses, held in local schools, libraries and community centers. Problem. If you are a 30-something single mother required to be at her retail store job on Saturday to wait on caucus attendees going to and from the caucuses, you cannot participate. If you are a 17-year-old high school student who has never worked a day in your life, you can participate and vote. This system doesn't even pretend to be fairly accessible to everyone.

Fact 2. Anyone can attend, but to vote for presidential delegates you must be a registered voter and publicly attest that you feel like you are a Democrat. If you are not registered to vote, voter registration forms will be available so you can participate. Anyone who will be 17 years five months old or older by the March 26 can register and can vote in the caucuses. Problem. You do not need to be a Democrat, you need only say you are. The State of Washington does not include a party designation in voter registrations, so there are no laws involved.  It doesn't matter. If you have not bothered to register to vote because you don't usually vote, no problem. You can come with friends to the Party's party and they'll register you. They'll let you help pick the Democratic candidate. It's a cool event, so take selfies and don't bother to vote in November or in 2018 when such fun parties aren't held.

The rules are somewhat different in each state that holds caucuses. But don't believe any news stories describing large turnouts in caucus states. Last night one news story reported Long lines, big crowds at Idaho Democratic caucuses. And indeed, for a caucus night in Idaho the turnout was large, a whopping 11.2% of the Idaho voters who likely will vote Democratic in November participated. However, the participation rate in the Democratic primary in Missouri was 51.0%, Alabama 48.7% ... in fact, the lowest participation rate in a primary state was Louisiana with 36.3%.

The fact is that to date the 2016 voter participation rate in the caucuses has averaged 8.8% (using the likely November Democratic voter count for those states). To date the average number of voters selecting each pledged convention delegate in caucus states is 1,372.

In contrast, the likely November Democratic voter participation rate in the primaries held to date has averaged 47.7%. The average number of voters selecting each pledged convention delegate in primary states is 8,315.

Since the caucuses already held have awarded to Bernie Sanders 222 delegates and to Hillary Clinton 145, it is safe to say that the caucus system favors Sanders. After combining the caucus results with the primary results, to date Clinton has had to win 6.9% more voters per delegate than Sanders.

After August, the national Democratic Party organization needs to assure that the remaining state caucuses are replaced with primaries.
Posted by Michael O'Faolain - at 10:41 PM