For nearly 15 years, California has been a state that has no racial/ethnic majority. In other words, non-Hispanic Caucasian residents ceased to be the majority a long time ago. It is a trend that is slowly becoming a national reality and we're leading the trend.

But there is a disconnect as described in the key findings of a report released Tuesday evening by the Public Policy Institute of California - California’s Exclusive Electorate, Who Votes and Why it Matters.

According to the report:


As California's population continues to expand and change, its voting rolls are not keeping pace and its voters have become unrepresentative of its population.

Voters in California tend to be older, white, college educated, affluent, and homeowners. They also tend to identify themselves as “haves”—rather than “have nots”—when asked to choose between these two economic categories. Nonvoters tend to be younger, Latino, renters, less affluent, and less likely to be college educated than likely voters—and they generally identify themselves as have nots.

The economic differences between voters and nonvoters reflect the growing economic divide that has surfaced as one of the most important policy issues in the 2016 election year—and they have important implications for policymaking. Voters and nonvoters vary noticeably in their attitudes toward the role of government, government spending, ballot choices, and elected officials—all of which come into play during an election year and influence governing choices in the long term. 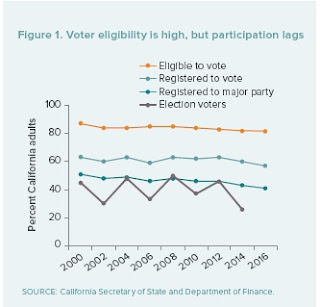 Even in California - a state that is basically a state of voters who vote Democratic - voters did participate in substantially greater numbers to elect and re-elect Barack Obama. It was good fun. Then...

In the non-Presidential election years, those same voters abandoned Barack Obama in droves by failing to insure he had a Democratic majority in Congress. In 2014 California voters led the way in abandoning the Obama Administration.

Presidents, of course, have no real power over domestic policy. They depend upon Congress to adopt policy that  the President's Administration subsequently can implement.

When those voters choose this "feel good" pattern and then get upset because "their" President can't achieve policy changes, they are indicating their absolute ignorance about how their government works.

Unfortunately, this year's primary participation pattern indicates that the enthusiastic Presidential-election-only voters are driving the Bernie Sanders movement. If Bernie were to win, these would end up being the most disappointed voters in decades as they would puzzle four years from now why Bernie couldn't operate as a dictator creating the new domestic policy he promised by Presidential fiat. It would never occur to them that they were the source of their own disappointment. And Donald Trump's supporters would face the same problem.

According to the Institute's report voters who are older, white, college educated, affluent, and homeowners - the "haves" - will determine who sets domestic policy because they register to vote and actually vote in much greater numbers. They won't be happy with Presidential election results - this year particularly, there are no likely nominees representing this group - but they can take solace in the fact that in terms of their interests it won't matter much who is elected President.

So, hey America, let's have a fun Presidential "contest" between Bernie-the-Commie and Donald-the-Fascist. Every four years, The Politics Show will rise up to become the greatest American reality show, one where the viewers decide, providing television networks with great ratings.

And then the viewers can quit watching The Politics Show for four years, again.
Posted by Michael O'Faolain - at 1:20 PM