The coming shift in California politics, or maybe politics as usual?

In the June 2012 primary election Californian's have a chance to significantly alter their state government.

Some think that the voters made a significant change when they approved the California Top Two Primaries Act in June 2010 and the Voters FIRST Act in November 2008. Maybe. But what we do in June 2012 will determine whether we have the ability as rational voters to take advantage of the changes or whether existing interest groups will just simply adapt to effectively keep things pretty much the way they are.

I'm not so sure we Californian's have the political capacity to make this work for us. It isn't radically different from the recall election process that gave us Governor Arnold Schwarzenegger. And the first tests of the process in April didn't seem to offer much promise.

But one year from now we have a chance to make the two Act's work for us at the same time to create a viable State government.

The 2008 Voters FIRST Act established the Citizens Redistricting Commission giving it, not the Legislature, the task of handling reapportionment of State Legislative Districts in 2011. In November 2010 the voters added Congressional Districts to the task.

Whatever else one can say about the results, the Commission did its job as outlined in the Act:


The commission shall establish single-member districts for the Senate, Assembly, Congress, and State Board of Equalization pursuant to a mapping process using the following criteria as set forth in the following order of priority:

(3) Districts shall be geographically contiguous.

(4) The geographic integrity of any city, county, city and county, local neighborhood, or local community of interest shall be respected in a manner that minimizes their division to the extent possible without violating the requirements of any of the preceding subdivisions. A community of interest is a contiguous population which shares common social and economic interests that should be included within a single district for purposes of its effective and fair representation. Examples of such shared interests are those common to an urban area, a rural area, an industrial area, or an agricultural area, and those common to areas in which the people share similar living standards, use the same transportation facilities, have similar work opportunities, or have access to the same media of communication relevant to the election process. Communities of interest shall not include relationships with political parties, incumbents, or political candidates.

(5) To the extent practicable, and where this does not conflict with the criteria above, districts shall be drawn to encourage geographical compactness such that nearby areas of population are not bypassed for more distant population.

The problem facing anyone with this job is the complexity of creating 80 Assembly Districts of approximately the same size regardless of criteria used, but when you are told not to consider political parties, incumbents, or political candidates it is actually harder - it's easier to create boundaries with the sole objective to assure the reelection of incumbent office holders.

The point is to get rid of Districts that look like this District (click on the image to see a larger version): 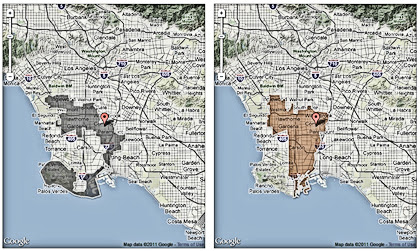 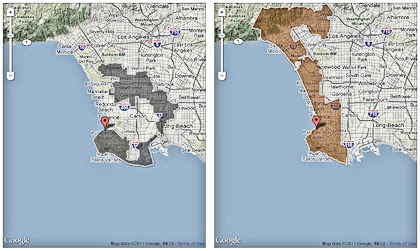 The proposed district includes coastal communities but the boundary had to wrap inland to get enough people - it includes Beverly Hills not Compton.

Was this a perfect solution? Given the criteria to place together populations which share common social and economic interests, in which the people share similar living standards, use the same transportation facilities (limo's), have similar work opportunities, or have access to the same media of communication relevant to the election process, one can say it is as near to perfect as one can achieve.

The process is not without results that are imperfect. It's interesting to examine the North Coast, the area that is currently contained in Assembly District #1 and California Congressional District #1. The graphic below indicates how the current Assembly, Senate, and Congressional districts compare with the proposal click on the map to see a larger version):

Then you notice that the current Senate and Congressional districts wander over to an area around Sacramento while the proposed districts continue down the coast line to the Golden Gate, including Marin County.

The proposed new configuration has an interesting effect on San Francisco. While it's Assembly and Congressional Districts aren't changed, it finally gets to be in a single unified Senate District if the proposals are approved as is.

So it seems this all works out. But there is one area that is sure to be contentious - Santa Rosa and the area of Sonoma County immediately surrounding it:

Here's the odd thing. In 2000 Santa Rosa and it's surrounds was included in an Assembly District that included much of Napa County and over into the Sacramento Valley almost to I-505.

The apparent first need was to reduce population of a contiguous coastline North Bay Senate District population by about 250,000 to make it a viable size.  In the end, there may be no way to avoid this kind of oddity because of population shifts. If combining this way promotes the stated goals in 90% of California while not promoting some political objective, then we probably are stuck with situations like this.

Will the voters that created this Commission support it publicly or will we have the usual government agency public hearings where only opponents turn out in large numbers? Can the Citizens Redistricting Commission stand up to hostile attacks from interest groups on its proposal? I hope so, because it is clear they did a credible job.

But the real question is will it be politics as usual in 2012 after the dust settles? When it comes to encouraging people to run for office and voting for independent-thinking candidates, we Californians don't have a very good track record.
Posted by Michael O'Faolain - at 10:57 PM