"Egalitarianism" is a political philosophy that states that all people shall have an equal standing before those establishing and exercising governmental power. It has always been the underlying philosophy of the California education system. Suddenly, it has become a problem which will be discussed here. But first....

The opening of the United States Declaration of Independence states ""We hold these truths to be self-evident, that all men are created equal...."

Considered one of the philosophical cornerstones of "The American Way", in 1776 abolitionist Thomas Day commented on that opening sentence:


If there be an object truly ridiculous in nature, it is an American patriot, signing resolutions of independency with the one hand, and with the other brandishing a whip over his affrighted slaves.

Americans, because they are people, have never supported egalitarianism in any broad sense meaning completely equal treatment by government. As opposed to accepting slavery, some unequal treatment ends up being "more fair."

For instance, most of us would resist conceptually the idea of a head tax as the sole means of supporting government. Yet it is the most egalitarian tax system. Get rid of the income tax, the sales tax, property tax, etc. Just bill every person who resides within the jurisdiction.

To get some idea of what such a tax might mean, it would require payment of about $3,600 a year from every resident (man, woman, and child) in California to support the State General Fund. So a family earning $40,000 a year consisting of a man, a woman, and three children would pay $18,000 a year. A single "dot-com" billionaire would pay $3,600 a year.

This would be an anathema to the American political left, which espouses a belief in egalitarianism but frequently opposes literal egalitarian policy proposals.

On the other had the American political right sees egalitarianism as as "an achiever's torment" which hates the exceptional person.

Which brings us to the California education system, or at least the funding of that system. It is the average-achieving middle class person whose condition most requires egalitarian education policies. But...


The other asserted policy interest is that of allowing a local district to choose how much it wishes to spend on the education of its children. Defendants argue: "[I]f one district raises a lesser amount per pupil than another district, this is a matter of choice and preference of the individual district, and reflects the individual desire for lower taxes rather than an expanded educational program, or may reflect a greater interest within that district in such other services that are supported by local property taxes as, for example, police and fire protection or hospital services."

We need not decide whether such decentralized financial decision-making is a compelling state interest, since under the present financing system, such fiscal freewill is a cruel illusion for the poor school districts. We cannot agree that Baldwin Park residents care less about education than those in Beverly Hills solely because Baldwin Park spends less than $600 per child while Beverly Hills spends over $1,200. As defendants themselves recognize, perhaps the most accurate reflection of a community's commitment to education is the rate at which its citizens are willing to tax themselves to support their schools. Yet by that standard, Baldwin Park should be deemed far more devoted to learning than Beverly Hills, for Baldwin Park citizens levied a school tax of well over $5 per $100 of assessed valuation, while residents of Beverly Hills paid only slightly more than $2. - Serrano v Priest [5 Cal. 3d 584]

In Serrano v Priest, the California Supreme Court called funding schools through a mechanism that favors school districts in wealthy communities "a cruel illusion" that essentially denies some children the resources of adequately financed schools.

Perhaps public education is the one policy arena where Americans at least pay lip service to the idea that every child an equal chance to achieve. And while a school having more money does not automatically make the education a child receives better, no rational person would deny that signficant differences in funding will result in an unequal opportunity for the average-achieving child. It may also affect special programs for the over-achiever and the learning disabled, but it may not. But significant funding differences will affect opportunities for the 80% in the middle.

The truth is, despite the nearly four-decades-old Serrano decision, California has not even come close to an egalitarian funding system for its pubic schools. In fact, in the past two decades the situation has become worse. Many richer districts have no trouble getting parcel taxes passed and receiving "voluntary" financial support from parents.

Comparisons have been done even though many anti-tax and pro-education elements oppose doing comparisons. These two are examples: 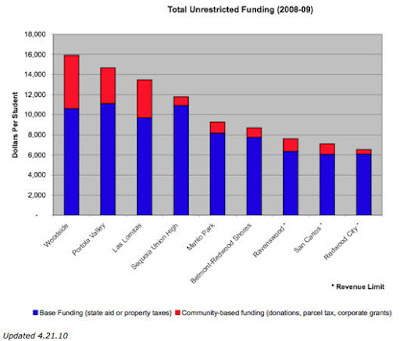 Following the failure of the Democratically controlled Legislature to restrain expenditures and save for rainy days in years like 2007-08 when revenues climbed dramatically, the California education system has already experienced major cuts in education funding and likely will see significantly larger cuts.

To prevent these cuts and to needle Republicans, Democratic Senate President Pro Tem Darrell Steinberg has introduced SB 653 which provides as follows:


This bill would authorize the governing board of any county or city and county and any school district , subject to specified constitutional and voter approval requirements, to levy, increase, or extend a local personal income tax, transactions and use tax, vehicle license fee, and excise tax, including, but not limited to, an alcoholic beverages tax, a cigarette and tobacco products tax, a sweetened beverage tax, and an oil severance tax, as provided.

Why school districts? Is it hard to imagine that local income and sales taxes to support school districts will result in the same inequities that the local property tax does? Is this really the kind of thinking that reflects the best of the California Democratic Party leadership?

We have already seen Governor Brown dump off onto local agencies the task of providing prison space. Now Steinberg is proposing to dump off the responsibility of equitably funding education to no one. He's proposing the Legislature abandon the State's responsibility for some semblance of an egalitarian approach to public education and leave it up to local school boards to figure out how fund education based on local financial resources.

In school districts located in affluent communities served by upscale shopping malls, presumably that could turn into a really good education system. In other areas, well who cares?

This reflects a California government system that shouldn't exist. It's a system that has been corrupted - not criminally corrupted, but corrupted in the sense that it is like contaminated milk. The whole carton needs to be discarded. We don't have a viable government; that is the cruel illusion now.

Which brings us back to the issue of the historical lack of policy leadership from Governor Moonbeam. Serrano v Priest was the significant policy issue when Jerry Brown took office in 1975. So was the runaway property tax revenue problem. These were two issues that together deserved strong policy leadership from California's Governor at that time.

But Brown wasn't a policy leader, he was a politician seeking photo ops, press notice at the personal level, and support for a second term. He got all three and four years later voters reelected him even though California government was headed for a long march to the chaos we see at the beginning of the 21st Century.

For Jerry Brown and "his brother" Willie were the elected public officials most responsible for abandoning California policy development to lobbyists, special interests, fear mongers, and idiots. And California always leads the way for the nation.

This leads us directly back to the Social Science Research Council American Human Development Project's "A Portrait of California" (Portrait) briefly discussed in the last post. This study using census data and other sources tells us clearly that what in the early 1980's columnist Dan Walters warned about the future of California has come true.

Instead of a California envisioned in the early 1960's by Moonbeam's dad, Governor Pat Brown, as represented by the goals of the California Master Plan for Higher Education of 1960 to continue the California Dream in the second half of the 20th Century, we got Moonbeam's leadership failures.

The Portrait describes Five California's that evolved in the Moonbeam era:
The Portrait provides government service comparisons in what is called A Tale-of-Two's. 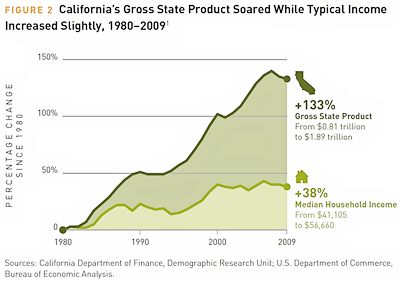 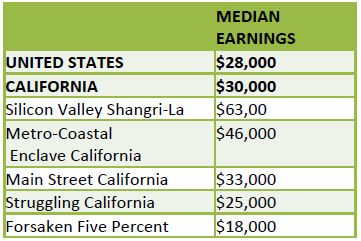 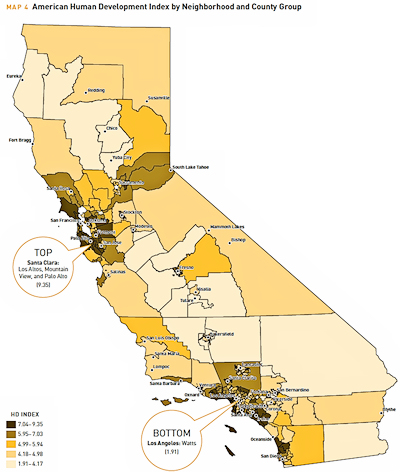 In the case of the Portrait, what surprised me was the accuracy and bluntness of their conclusion which reads in part:


Public discourse around California’s future focuses increasingly on what’s wrong with the state, particularly its finances—titanic deficits, plummeting revenues, costly entitlements, and drastic cuts. The budgetary situation is grave, and clear-eyed realism is called for, to be sure; however, doomsday scenarios are not a useful starting point for rallying Californians around a new vision for the Golden State.

Yes, California—like many other states—has serious financial woes, caused in no small measure by a revenue free-fall fueled by tax cuts and a national downturn that hit the state particularly hard. California was already facing severe budget shortfalls on the eve of the recession in late 2007. The stage was set by Proposition 13, a 1978 amendment to California’s constitution that dramatically limited property taxes, previously the state’s largest and most stable revenue source. Decades of tax cuts then placed the state in an increasingly precarious budgetary situation—California had some $13 billion less in annual revenue in recent years than it would have had were those taxes still in place.1 Then the Great Recession arrived, pushing the state into the financial abyss. California’s 2010–2011 revenues, dependent largely on the volatile personal income tax, fell more than $40 billion short of the nonpartisan Legislative Analyst’s 2007 forecast.

I would only slightly disagree with one thing. In my opinion the stage was set in 1974 when the voters elected Jerry Brown their state's Governor.

The Portrait offers conclusions and recommendations that should be carefully read by Californians concerned about development of policy to improve the lives of most residents ... oh, and by Jerry Brown.

And just perhaps California Democrats need to elect leaders who were born at least after 1960 instead of before WWII (like Brown, Feinstein, Boxer and Pelosi) so that those born after 1990 may have some kind of future here.
Posted by Michael O'Faolain - at 12:47 PM