You've got to be kidding - Brown's budget gimmick free????

A "gimmick" in the context of something like a budget plan means "a concealed, usually devious aspect or feature of something, as a plan or deal" according to Dictionary.com.

Coming into this year, newly elected Governor Jerry Brown seemed to be indicating that he would be offering a budget proposal that cut State General Fund spending to balance expected revenue but then would ask the voters to approve tax revenue increases to restore education and some other programs.

In a shocking interpretation of his presentation on Monday,  a number of stories in the press and blogs on line have appeared declaring Governor Brown's 2011-12 budget proposal "gimmick free." I don't know how he sells this spin!

The State Legislative Analysts Office in their analysis of the budget proposal lists in Figure 1 a total of 27 items used by Brown to reduce the deficit. Of those 27, in my opinion seven are not "gimmicks" and four may not be. The remaining 16 are clearly "gimmicks."

The core of his budget General Fund deficit-elimination proposal is to get the voters to approve a five year extension of the temporary tax increases put into effect in 2009. He then proposes to permanently shift some program expenses to local government along with some of that temporary revenue. When those extensions expire in five years, two things will be true. First, Brown won't be Governor. Second, the loss of revenue will not be the State's problem, but rather the problem of local government. If that whole thing is not a "gimmick" I don't know what is. I'm not even going to discuss the details of that in this post.

In terms of actual proposed budget cuts, his proposal offers a total of $7.0 billion in cuts. Using the Legislative Analyst list to find real cuts, they are as follows: 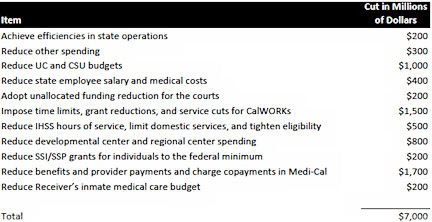 Looks like a worthwhile list to review. What does the Legislative Analyst have to say about them generally?


As we discuss in detail later in this report, our initial review of the Governor’s budget suggests that in some key program areas, the administration’s estimated savings are optimistic. These areas include some proposals in corrections, state employee health plans, and In–Home Supportive Services (IHSS). In addition, the budget plan includes $200 million of unallocated reductions to state operations for efficiency purposes. In some cases, the administration has not provided significant detail yet on how the savings from these proposals would be achieved. Historically, such lack of detail often has been associated with budget actions that fail to produce the desired level of savings.

More specifically, the first two items on the list are good goals. But as the Analyst says: "Historically, such lack of detail often has been associated with budget actions that fail to produce the desired level of savings."
Realities work against it. Costs beyond State control, such as fuel, are rising.

"Reduce UC and CSU budgets" simply means reduce General Fund contributions to those institutions by $1 billion. Simple enough. But Brown proposes that these reductions be reflected in operational costs without offering specifics. He doesn't want to see increases in tuition. In fact, he wants to keep student aid at current levels and he does this with a gimmick. As explained by the Legislative Analyst:


The Governor’s proposal would shift $947 million in Cal Grant costs from the General Fund to federal Temporary Assistance for Needy Families (TANF) funds. This fund swap would have no net effect on total funding for Cal Grants. As discussed later in the report, the TANF funds would be provided through an interagency agreement with the Department of Social Services, whose TANF funding would be freed up by the Governor’s proposed cuts in CalWORKs.

In other words, he's simply redirecting existing funds for one group of needy to another group of needy. That's ok, maybe, but it doesn't really cut total budget expenditures, though it moves some out of the General Fund. It's a gimmick to reduce the backlash at universities.

He's proposing to reduce state employee salary and insurance costs by $400 million through various cuts in pay and benefits. As the Legislative Analyst notes, that is not very likely.

He's proposing unallocated cuts in the General Fund contribution to the court system by $200 million. The Legislative Analyst notes this has been offset by such things as fee increases in the last few years. If that happens, it is not a reduction in expenses, it's an increase in fees. The Analyst suggests the courts could use electronic court reporting plus competitive bidding to reduce costs for court security. Yeah, let's just assume this is a fee increase.

The next five items on the list are reductions in health and human services. This is a complex set of recommendations that involve federal rules, shifting of funds allocated by ballot measures, etc.

The last item is a joke. It says "reduce Receiver’s inmate medical care budget." That refers to the fact that a federal judge took over the matter a few years ago because the State didn't conform to reasonable care. Every year Governor Schwarzenegger made that reduction and every year the federal judge did what he thought was right. It's a gimmick.

Now I have to point out that the Legislative Analyst included six items in the heading "Expenditure-Related Solutions" that aren't expenditure reductions. One has to admire Brown for convincing the press that these are somehow reductions. For example, one is "shift redevelopment funds to Medi-Cal and trial courts." The redevelopment funds are local government monies. Shifting them to cover state costs isn't a cut in expenses, it's a gimmick. It's incredibly complicated and unlikely to be achieved by 2011-12.

The press is already confusing the question of whether it might be a desirable goal with whether it is a goal that can be accomplished. Here's the Analyst's explanation:

In 2011–12, the successor agencies would use the redevelopment revenues to:
Beginning in 2012–13, any property tax revenues remaining after the successor agencies pay redevelopment debt would be distributed to other local governments in the county. Distributions of these revenues generally would follow provisions in existing law, except that:
The administration’s plan will require considerable work by the Legislature to sort through many legal, financial, and policy issues. Several voter–approved constitutional measures, for example, constrain the state’s authority to redirect redevelopment funds, use property tax revenues to pay for state programs, or impose increased costs on local agencies. In addition, the administration’s plan does not address many related issues, such as clarifying the future financial responsibility for low– and moderate–income housing (currently, a redevelopment program).

Although the administration’s approach to estimating the annual cost of redevelopment debt is reasonable, their assumptions regarding debt terms, interest rates, and other factors err on the side of understating debt costs. Our initial review indicates that the annual cost to pay these debts could be $1 billion or more higher than the administration assumes. If our initial review is correct, this would reduce the funds available for other purposes. For example, the Legislature may not be able to use $1.7 billion of these revenues for state programs and make $1.1 billion in pass–through payments to local governments.

In other words, the proposal for the 2011-12 fiscal year is a gimmick. What Brown found out was that he couldn't stomach proposing a balanced 2011-12 budget. Or he's setting things up for failure so he can devastate the education system. Here's a comparison between what was spent in 2007-08, what Brown proposed. and what balanced General Fund disbursements would look like at the end of 2011-12 without a revenue increase: