Property tax base declines, forecast to continue through 2011

As previously noted here property tax revenue is going to be a problem statewide, beginning with the net drop in assessed value. Reports so far range from a drop of 26.7% in San Jacinto (in Riverside County which had an overall drop of 10.5%) to a few locations such as commercial hubs like Irwindale (in Los Angeles County which had an overall drop of only a .09%) with an increase of 8.7% mostly due to peculiarities of Proposition 13 rules.

Other reports include Merced County down 13%, Contra Costa County down 7%, Sacramento County down 6.4%, and San Bernadino County down 6.2%. A few places such as Marin and San Francisco Counties will see net increases because home foreclosure rates are relatively low and sales and other transfers that kick in a Proposition 13 reassessment have resulted in substantial increases offsetting reductions in residential value for homes sold in the last few years.

The fact is most local government agencies have anticipated this in their budgets for 2009-2010. Whether the Legislature and the Governor have adequately anticipated this as it affects schools is unclear.

The more significant issue will be how cash flow will be affected. As noted here previously property tax payments during November and December may be significantly lower than previous years. Many of those who in previous years paid their full tax payment for the fiscal year in November will choose to pay half in April 2010. More than few may not pay in November hoping to have enough money in April. Some property tax payments will not be made in this fiscal year at all, particularly those in the midst of the foreclosure process.

Then there is the dismal future. The Walnut Creek, California-based mortgate insurer PMI Group issued its quarterly Economic & Real Estate Trends report this week indicating the two year probabilities of lower house prices through the end of March 2011 in the Metropolitan Statistical Areas. In California, 20 of the 28 MSA's have a 99% or greater chance of lower house prices and only two had less than a 90% chance - the two Bay Area MSA's. But all are considered a high risk area as seen on this map: 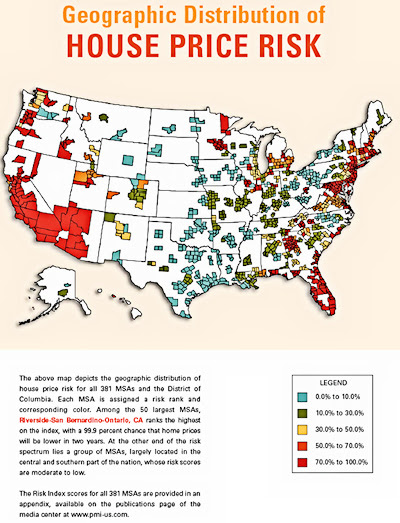 It seems unlikely from the projections that the State of California will see any significant property tax recovery before fiscal year 2011-2012 that could help the State with its deficit and its ability to support the education system.
Posted by Michael O'Faolain - at 11:22 AM