Why must competitors be considered enemies? Changing the rules in the 21st Century is a must. 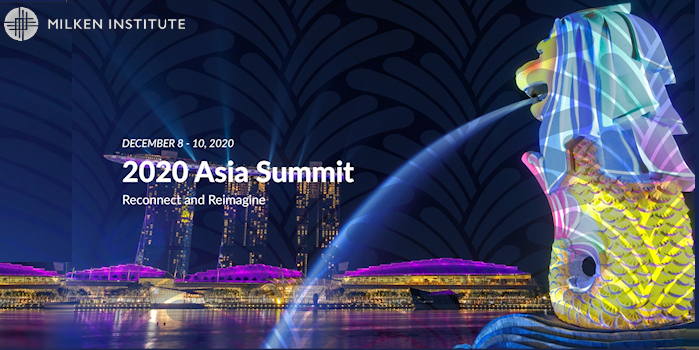 Americans need to find language that doesn't encourage a rise in enmity when a competitor succeeds. That is a 20th Century attitude that resulted in wars.

This year's annual 2020 Asia Summit sponsored by the Milken Institute is being held in partnership with the Monetary Authority of Singapore and run alongside the Singapore FinTech Festival. It is a unique opportunity to embrace the possibilities of a Pacific-Southeast Asian partnership in the world.

It shouldn't have come as a surprise that at the beginning 83-year-old wealthy investor and Donald Trump's Secretary of Commerce Wilbur Ross would at the beginning set up a negative theme by saying “China continues to be both the largest potential market and the principal military and economic threat in the region,” noting that the Regional Comprehensive Economic Partnership (RCEP) signed last month by China and 14 other Asia-Pacific countries will not tackle what the U.S. has declared to be the “most sensitive issues” in trade - subsidies to state-owned companies, protection of intellectual property and equal market access.

Over two hours later in a session titled The United States in 2021 and Beyond Bob Corker, former Republican United States Senator from Tennessee from 2007 to 2019, noted that the Trans-Pacific Partnership (TPP) was a “missed opportunity. Obviously politics got a hold of the issue in 2016 and it was a missed opportunity for our country to really put a lot of pressure against some of the things that China was doing, and to have an alliance that would have made a significant difference."

The relevant portion of a longer post is offered below to explain what is happening. 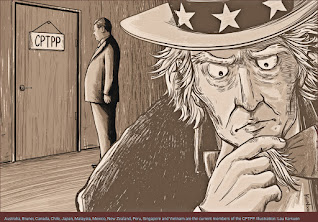 China clearly has has offered a 21st Century non-military challenge to U.S. economic strength with a crucial win in world trade, along with a manufacturing focus shift inward.

This must be viewed in the context of China's relative success at suppressing Covid-19 outbreaks. China's one-party unitary national government can impose mandatory lockdowns, testing, and vaccination more effectively than in an undisciplined multiparty federation such as the United States.

China's one-party unitary national government can, and has, turned inward to promote its own consumer economy with the context of the 14th Five-Year Plan and the 2035 Vision to be taken up by the Party Congress next year. Consider this news story:

President Xi Jinping called on the nation in May to rely more on domestic demand for future growth – dubbing it a dual circulation strategy – and his directive requires significant changes in both internal supply and demand.
“The pandemic has made it difficult for us to sell abroad, but we do feel as though Chinese customers are less … enthusiastic for foreign brands, especially mid-level products,” said a sales manager at a fashion jewellery brand with shops all over the country.
“Frankly, it may be becoming fashionable and more politically correct to make and consume good-quality Chinese goods,” he added, asking not to be identified.
That sentiment seems to be felt by a growing number of Chinese export manufacturers, some of whom say they have started shifting investments to the domestic market even as their exports have seen a huge resurgence recently.
Orders have been returning to China as other producing countries are still being ravaged by the pandemic, but manufacturers know the trend is most likely unsustainable.

However, China's one-party unitary national government can, and has, turned toward the Pacific-Southeast Asia to join with Australia, Brunei, Cambodia, Indonesia, Japan, Laos, Malaysia, Myanmar, New Zealand, Philippines, Singapore, South Korea, Thailand, and Vietnam to create the Regional Comprehensive Economic Partnership (RCEP). The RCEP, signed November 15, includes almost one-third of the world’s population and about one-third of its gross domestic product. It is the first ever free trade agreement between China, Japan and South Korea – Asia’s largest, second-largest and fourth-largest economies. It's goal is to progressively lower tariffs and aims to counter protectionism, increase investment and allow more free movement of goods.

Brunei, Vietnam, Laos, Cambodia, Thailand, Myanmar, Malaysia, Singapore, Indonesia and the Philippines are members of the Association of Southeast Asian Nations (ASEAN) trade group. It was announced December 1 that the European Union has joined with the ASEAN group in a strategic partnership to "stand up for safe and open trade routes and a free and fair trade" according to German Foreign Minister Heiko Maas after a virtual meeting with his EU and ASEAN counterparts. "Together, we represent more than a billion people and almost 25 per cent of global economic power," noted Maas.

Then, to the surprise of many, President Xi Jinping announced that China “will actively consider” joining the Comprehensive and Progressive Agreement for Trans-Pacific Partnership (CPTPP). Chinese Premier Li Keqiang’s in May noted that “China has a positive and open attitude toward joining the CPTPP”. Were this to be accomplished it would add Canada, Chile, Mexico, and Peru to China's trade group partners.

For Americans who don't remember as far back as four years ago (most Americans), the CPTPP evolved from the Trans-Pacific Partnership (TPP), which failed due to the withdrawal of the United States after Trump took office. Twenty-two TPP provisions that were priorities of the U.S., but not other negotiating partners, were suspended or modified in the CPTPP.

President Barack Obama's push to pass the TPP in 2016 was resisted by the 2016 presidential candidates in both major parties. Clinton and Trump opposed the deal, arguing that it would hurt American workers.

The problem for Clinton was former 2016 presidential candidate socialist U.S. Sen. Bernie Sanders rallied his supporters to urge the Democratic National Committee (DNC) to include language in their platform rejecting the TPP. CNN reporter Eric Bradner wrote, "By keeping specific opposition to the Trans-Pacific Partnership out of the platform, Democrats avoided embarrassing President Barack Obama." Although the DNC's decision was a disappointment to Sanders, he, along with U.S. Sen. Elizabeth Warren, continued to spearhead efforts in the Senate to get their colleagues to vote against Obama's trade deal.

This year, President-elect Joe Biden stated: "When it comes to trade, either we're going to write the rules of the road for the world or China is – and not in a way that advances our values. That's what happened when we backed out of TPP – we put China in the driver's seat. That's not good for our national security or for our workers. TPP wasn’t perfect but the idea behind it was a good one: to unite countries around high standards for workers, the environment, intellectual property, and transparency, and use our collective weight to curb China’s excesses." 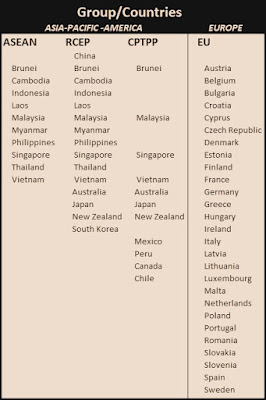 What Biden did not foresee was the RCEP, the EU-ASEAN agreement, and China's positive outward reach to the CPTPP.

The problem for the U.S. is that while two-thirds of the original chapters remain in the CPTPP,, among the 22 provisions set aside include such things as investors’ ability to litigate disputes under investment agreements and investment authorizations - which are used mostly for mining and oil investments - are more limited.

Further regarding intellectual property the length of patent protection for innovative medicines has been shortened, technology and information protections have been narrowed, and copyright periods for written materials have also been shortened. Particularly, the stringent requirements that the United States pursued in technological protection measures, rights management information, encrypted satellite and cable signals, and safe harbors for internet service providers have all been removed.

Effectively, the American-East-Coast oriented ignoramuses handed a massive international trade win to China. They didn't protect any American interests or American workers. As Biden said: "We put China in the driver's seat."

The map below with the countries in white (most importantly the United States, India, and Russia) representing non-participants will shape our future Extended Economic Distortion: 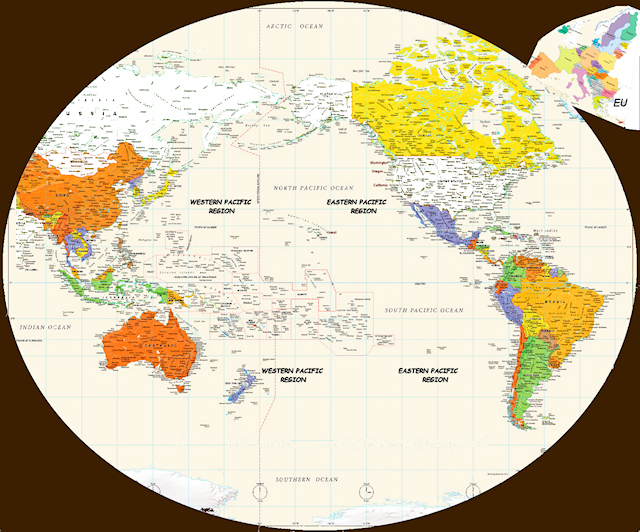 The fact that the EU has chosen to get its foot in the door should be a clear warning that the United States no longer has the "collective weight" (to use the term Biden used) it had in the 20th Century. Americans made significant choices at the beginning of the Millenium, choices which will continue to hang over the U.S. economy in complex ways for decades.