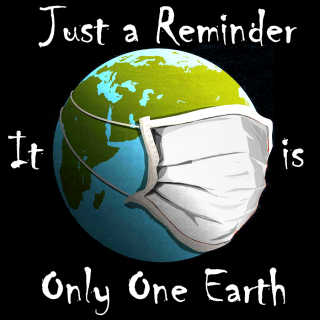 On January 1, 2020, a formal international economic structure and an informal global economic structure existed. Both were unlike anything that existed in the 19th Century when the economic theories of Adam Smith, Karl Marx, and friends became popular. We have significantly interrupted the normal functioning of those structures because of a pandemic threatening the lives of many, many people.

Ignorance still pervades what has become the Coronavirus Crisis though you would not know that from the news relating to the Trump Administration exploring ending shutdown orders.

Covid-19 infections began in China in November 2019 or earlier and as noted in an article in the LA Times may have arrived in the U.S. in December.

In the past, several members of the coronavirus family called "human coronavirus" have infected us annually causing mild respiratory ailments we regard as the common cold. These "colds" are not distinguished clinically from other annual colds. Those infections provide no lasting immunity. The same type of human coronavirus may return after several years, but a different one may cause an infection in intervening years. Incidents peak in the winter, taking the form of local epidemics lasting a few weeks or months. We also don't shut our economy down during these "common cold" epidemics. From this we know that strains of coronavirus behave differently from influenza virus strains.

No precedent exists to guide us through to January 2021. Still key elected officials are under tremendous pressure from constituents only slightly more ignorant than they are who are pushing to end the Great Economic Lockdown of 2020. Or perhaps they all are crassly merciless believing that humans are just nameless machines feeding labor into the all-important economy. If you think they are not that ignorant or crass, consider this.

In fact a pandemich such as the Coronavirus Crisis was predicted as we can see below in Bill Gates' TED2015 talk explaining what our pandemic would be like. (with transcript).


It is fair to say that almost all the populist voters who supported the Trump movement were and are unaware of what Gates explained. And it is likely that those few who were aware dismissed it as a lie from the political left.

Because of the populist rhetoric reawakening 19th Century attitudes on race, culture, economics, and relative wealth, issues of public health and safety in the reality of the One Earth 21st Century did not come up in election campaign discussions. In the past decade within the western economies deliberate populist political choices were made to accelerate the reversal the 30-year economic globalization pattern that preceded the 2008-09 Great Recession.

The  Coronavirus Crisis and subsequent Great Economic Lockdown of 2020 is an unexpected outcome of those choices.

In the Post-WWII half-century leading up to the Great Recession the global economy expanded, with trade and cross-border financial flows growing and nations working together, albeit haltingly, resisting at times.

Since the Great Recession and prior to the Covid-19 pandemic cross-border financial flows were down more than 60 per cent by value indicative of the success of the populist choice and indicative of opposition to nations working together.

In the past decade overt government intervention and state-against-state economic clashes became the norm. Most obvious are Trump's trade wars which, along with Climate Change denial, blinded the American political debate to any broader "One Earth" reality. And Trump's most antagonistic trade war was with China.

That truth is that the health of the public in Wuhan, China, in December 2019 should have been the primary concern of the U.S. government resulting in a major effort to address the pandemic potential by mid-January 2020. But that was impossible in the political climate controlling American democracy within which money is the only issue, who has it and who can get it.

Government mobilization of the public and corporations to mitigate the Coronavirus Crisis has been compared to the mobilization of civilians and the economy at the beginning of WWII. Yet few, if any, have noted the parallels of American pro-isolationist policies of the Roaring 20's that led to the Great Depression and WWII. And in truth there has been no U.S. government effort to mobilize the public and corporations approaching the scale of WWII mobilization.

The Great Economic Lockdown of 2020 ordered by states and local governments in response to the Coronavirus Crisis has no parallels in history. In the 21st Century humanity exists in a rapidly moving "One Earth" reality created by the colonialism of the 19th Century, the wars and medical advances (including birth control) of the 20th Century, and the technology of the 21st Century. Consider:
Again no precedent exists to guide us through to January 2021. In addition to what we don't know about the Covid-19 coronavirus, we do not know how the interplay of the five factors listed above will influence government action attempting a return to economic "normal" and what reactions from labor/consumers will result.

After this pandemic the data will be crunched and costs of preparing for future pandemics, including the costs of creating structures to limit the impacts of those pandemics, will be considered for inclusion into a recovering economy.

The problem is many nation-states are controlled by glib semi-competent politicians served by the "infotaiment" media. And too many are committed to broad free-market policies constraining the possible consideration of government options to intervene in the economy even in a stressful pandemic situation.

Perhaps it is just a well we Americans have an experienced reality TV host as our President as a lack of precedent to guide him through to January 20th, 2021, will not be of concern - his writers can just make things up to suit him. What happens after that is another story....
Posted by Michael O'Faolain - at 4:12 PM