Yes, Barack...Donald Trump is a fascist but not a Fascist, a paleoconservative not a conservative 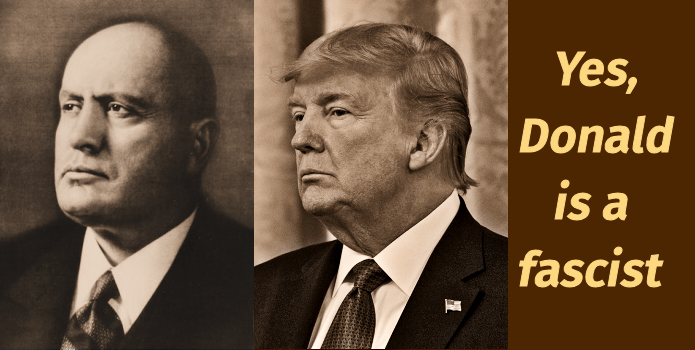 Donald Trump is an American paleoconservative republican (not a republican conservative) which falls under the generic ideological umbrella of fascism (small-f).

In the previous post, it is noted that Bernie Sanders is self-declared democratic socialist (not a social democrat) which falls under the generic ideological umbrella of communism (small-c).

The problem with describing Trump as a "small-f" fascist is he has never described himself as an American paleoconservative republican though based upon the actions of his Administration clearly he is, which blended with his rhetoric indicates he is a  "small-f" fascist.

During the 2016 then-President Obama privately told Virginia Senator Tim Kaine: "Tim, this is no time to be a purist. You’ve got to keep a fascist out of the White House." Publicly journalists, correspondents, and pundits argued that year and since over whether Trump is a fascist.

For instance, in a May 2019 article This is how fascism comes to America neoconservative historian and foreign-policy commentator Robert Kagen began:


The Republican Party’s attempt to treat Donald Trump as a normal political candidate would be laughable were it not so perilous to the republic. If only he would mouth the party’s “conservative” principles, all would be well.
But of course the entire Trump phenomenon has nothing to do with policy or ideology....
...We’re supposed to believe that Trump’s support stems from economic stagnation or dislocation. Maybe some of it does. But what Trump offers his followers are not economic remedies — his proposals change daily. What he offers is an attitude, an aura of crude strength and machismo, a boasting disrespect for the niceties of the democratic culture that he claims, and his followers believe, has produced national weakness and incompetence. His incoherent and contradictory utterances have one thing in common: They provoke and play on feelings of resentment and disdain, intermingled with bits of fear, hatred and anger. His public discourse consists of attacking or ridiculing a wide range of “others” — Muslims, Hispanics, women, Chinese, Mexicans, Europeans, Arabs, immigrants, refugees — whom he depicts either as threats or as objects of derision. His program, such as it is, consists chiefly of promises to get tough with foreigners and people of nonwhite complexion. He will deport them, bar them, get them to knuckle under, make them pay up or make them shut up.

Almost instantly we had a responsive story by Dylan Matthews of Vox telling us:


Kagan is wrong. Donald Trump is not a fascist. "Fascism" has been an all-purpose insult for many years now, but it has a real definition, and according to scholars of historical fascism, Trump doesn't qualify. Rather, he's a right-wing populist, or perhaps an "apartheid liberal" in the words of Roger Griffin, author of The Nature of Fascism. He doesn't want to overthrow the existing democratic system. He doesn't want to scrap the Constitution. He doesn't romanticize violence itself as a vital cleansing agent of society. He's simply a racist who wants to keep the current system but deny its benefits to groups he's interested in oppressing.

The problem can be summarized as the difference between that first letter, a "small-f". Like "communism" there is a generic minimal commonality we look for in a government to detect the presence of "small-f" fascism. And then there are fully implemented national governments, Communist or Fascist, which when each is studied have significant and confusing differences from other Communist or Fascist  national governments.

So in one sense journalists were, and still are, arguing past each other because they didn't have a common definition.

Of course in May 2016 nobody knew what Trump was because President Trump was yet to be. Today, if you ignore the confusion in the press struggling to understand the deliberately confusing rhetoric from Trump, you can see within the actions of his administration much to confirm an ongoing implementation of American paleoconservative republican political ideology (in addition to official implementations of attacks on "others").

The confusion lies in the fact that within the United States there are republican conservatives and paleoconservative republicans. Generally little public discussion about the differences occurs.

Republican conservatives advocate
Paleoconservative republicans advocate
With these definitions in mind, let's take a look at the confusion around facism.

Within the academic community "small-c" communism has been identified separately from Stalinist and Maoist implementations of "large-c" Communist states. But within the academic community "small-f" fascism has regularly been confused with the rhetoric and actions of Italy's Mussolini, Spain's Franco, and even Germany's Hitler. Trump has even played rhetorically with Mussolini generating in 2016 this headlines Trump explains tweeting Mussolini quote.

Here is the generalized definition of "fascism" as an umbrella that includes paleoconservative republicanism:


Small-f fascism is military-style authoritarian ultranationalism (a) supporting national economic self-sufficiency and productive capitalism and opposing international free market capitalism, (b) advocating resolution of class conflict within a nation through imposed state mediation in order to secure national solidarity, and (c) favoring the proletarian class over the bourgeois, a perspective that associates all people as being proletarian who are deemed by the state as productive of material wealth, including entrepreneurs, technicians, workers and soldiers.

In this post all of the actions of the Trump Administration are not going to be analyzed in the context of paleoconservative republicanism or fascism. But one term needs to be explained relative to President Trump,  "military-style authoritarian." We will do that in the context of the position known as the Attorney General of the United States.

Actually, Article I Section 8 empowers Congress to "make all Laws which shall be necessary and proper for carrying into Execution the foregoing Powers, and all other Powers vested by this Constitution in the Government of the United States, or in any Department or Officer thereof." In other words, Congress was to set the rules related to the operation of departments and department heads.

Article II Section 2 provides that the President "may require the Opinion, in writing, of the principal Officer in each of the executive Departments, upon any Subject relating to the Duties of their respective Offices." So the President can demand the written opinion of departments heads on any subject related to their jobs, including the Attorney General. That's the limit of the President's Constitutional authority to make demands on department heads.

That Section also provides that the President "shall nominate, and by and with the Advice and Consent of the Senate, shall appoint shall appoint Ambassadors, other public Ministers and Consuls, Judges of the supreme Court, and all other Officers of the United States." But Article II Section 4 of the Constitution provides that the "President, Vice President and all civil Officers of the United States, shall be removed from Office on Impeachment for, and Conviction of, Treason, Bribery, or other high Crimes and Misdemeanors" by Congress.

Those are the Constitutional provisions regarding the officers and departments.

Congress passed the Judiciary Act of 1789 which, among other things, established the Office of the Attorney General. The original duties of this officer were "to prosecute and conduct all suits in the Supreme Court in which the United States shall be concerned, and to give his advice and opinion upon questions of law when required by the President of the United States, or when requested by the heads of any of the departments".

The Department of Justice was established in 1870 to support the Attorneys General in the discharge of their responsibilities.

Not envisioned in all this was some military-style authoritarian chain-of-command structure with the President at the top. Only the military itself is specifically "under" the President.

Our founding fathers feared a military-style authoritarian Executive Branch. By military-style authoritarian we mean a form of government characterized by strong power structure in which power rests with a small number of people controlled by a dominant leader and including:
As expressed by Trump such a system depends upon the threat of violence from the military, police, and biker groups.

Every indication is Donald Trump's ideological preference for government, our government is that of a paleoconservative republican/fascist.
Posted by Michael O'Faolain - at 10:02 PM

Email ThisBlogThis!Share to TwitterShare to FacebookShare to Pinterest
Labels: 2020 Election