It's hard not to endorse Michael Bloomberg if you believe the climate crisis - without the fog of asperational socialism - is the issue that matters.

If you weren't aware of it, Michael Bloomberg has secured the endorsements of the mayors of three major cities in California – Stockton, San Francisco, and San Jose.

Stockton Mayor Michael Tubbs stated: ""I am excited to endorse Mayor Bloomberg for President as he has the record, the relationships, and the resources to defeat Donald Trump and reclaim our democracy." Following his endorsement, Mayor Tubbs was also named a national co-chair of the Bloomberg presidential campaign.

San Francisco Mayor London Breed said on Facebook that she is backing Bloomberg because he “is the only candidate for president with a real plan for African Americans”, touting his Greenwood Initiative to increase black home ownership and the number of black-owned businesses.

San Jose Mayor Sam Liccardo said in a statement "Mayors don't have the luxury of hyperpartisan tongue-wagging, they have to solve problems and get things done."

Given the importance of the climate crisis, this writer could not simply ignore these endorsements simply cannot be ignored. Bloomberg has been a big player in climate policy.

In 2015 Michael Bloomberg, as the U.N. Secretary-General's Special Envoy for Cities and Climate Change along with Mayor Anne Hidalgo of Paris hosted the Climate Summit for Local Leaders a gathering of Mayors and others as part of the meeting that resulted in the Paris Accord. At that gathering, Bloomberg told the attendees: “You were not elected to ask the public where they want to go, you were elected to have a vision about what is right for the people you serve, and then to convince them to follow you to a better life.”

Prior to that meeting, on October 8 Bloomberg and Vancouver Mayor Gregor Robertson were interviewed by WBUR's Here & Now host Jeremy Hobson. You can listen to that interview using this link.

In response to President Trump's announced withdrawal of the U.S. from that Paris Accord, in July 2017 Bloomberg and California Governor Jerry Brown launched The America's Pledge initiative which (funded by Bloomberg Philanthropies Support LLC,) aggregates, quantifies and publicizesthe actions of states, cities and businesses and other non-national actors in the United States to achieve the Paris climate accord goals. 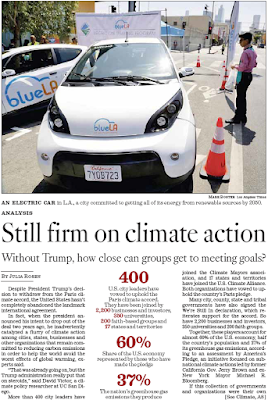 Despite President Trump‘s decision to withdraw from the Paris climate accord, the United States hasn’t completely abandoned the landmark international agreement.
More than 400 city leaders have joined the Climate Mayors association, and 25 states and territories have joined the U.S. Climate Alliance. Both organizations have vowed to uphold the country’s Paris pledge.
Many city, county, state and tribal governments have also signed the We’re Still In declaration, which reiterates support for the accord. So have 2,200 businesses and investors, 350 universities and 200 faith groups.
Together, these players account for almost 60% of the U.S. economy, half the country’s population, and 37% of its greenhouse gas emissions, according to an assessment by America’s Pledge, an initiative focused on sub-national climate actions led by former California Gov. Jerry Brown and ex-New York City Mayor Michael Bloomberg.
If this collection of governments and organizations were their own country, they would be the world’s third-largest emitter.
In a 2018 analysis, Frisch and her colleagues found that existing commitments by sub-national actors could achieve two-thirds of the emissions reductions called for in the U.S.’s Paris pledge. Broader participation and additional measures, like rapid retirement of coal-fired power plants, could bring that number close to 90%.
Under Obama, the U.S. had promised to get emissions 26% to 28% below 2005 levels by 2025. The country is already almost halfway there, although emissions rose in 2018 for the first time in three years.
To tackle the other half, all eyes are now on cities, states and businesses.

The The America's Pledge website offers a lot of information, some of which is summarized by the graphics below:

We are confronted with a lineup of candidates running in the Democratic Presidential primaries. Unfortunately, early on many have signed on to the "Green New Deal" proposal of self-declared socialists Senator Bernie Sanders and first-term Representative Alexandria Ocasio-Cortez which entwines socialist asperational goals into climate crisis policy. Senator Elizabeth Warren, has offered proposed complex economic policies designed to reduce carbon pollution.

I'm not quite sure what this all has to do with the Presidency. No one who understands American government can believe that complex economic goals, particularly socialist ideas, can be easily achieved by a President. Any policy to implement the goals must be approved by the United States House of Representatives and the United States Senate - you know, Congress. Just ask Obama how limited Presidential powers are when trying to get, say, a health care agenda passed in Congress with a Democratic majority in both houses.

For this writer, there is only one problem facing the people of the world, including Americans. That problem is the climate crisis.

As outlined above, only one candidate in the Democratic Presidential primaries has provided leadership to help American states, local governments, and private companies and citizens successfully act to reduce climate change. That candidate is Michael Bloomberg.

Of course Bloomberg is a billionaire. And as Mayor of New York, he was not the most socially sensitive of government officials. And he is most certainly not a socialist.

But when it comes to federal policy, at some point we might want to consider some things. For instance, what are the likely cost increases for health care going to be from climate change? Considerable evidence has already been gathered. One study examined 10 climate-sensitive events during 2012 that led to 917 deaths, 20,568 hospitalizations, and 17,785 emergency department visits, along with other health-related expenses, totaling nearly $10 billion (in 2018 dollars) in health-related costs.

Many types of health problems linked to 2012 climate-sensitive events that extended way beyond what typically comes to mind including pregnancy complications, carbon monoxide poisonings, and kidney disease complications, all linked to the aftermath of Hurricane Sandy in New Jersey and New York.

In other words, while there’s growing scientific evidence on the health impacts of climate change across the country, regarding your children's health apparently some of the candidates are committed to bogging Congress down in arguing over whether to abandoned Obamacare for a single-payer system. What was that story about a government leader fiddling while Rome burned?

All this leaves this writer wondering if Bloomberg might not be the best choice, not just because he has a lot of money to use to challenge Trump, but because he might be the best leader to get the U.S. government back on track to fight the climate crisis.
Posted by Michael O'Faolain - at 4:57 PM