What voters forget: How 1990's "Greed is Good" energy deregulation led to the California electricity-sparked wildfires and the 2019 power shutoffs 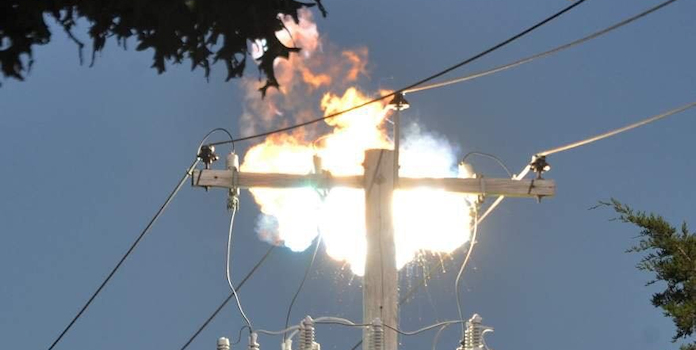 PG&E - the largest "investor-owned" public utility in the United States.

I grew up in Northern California in the 1940's and '50's when Pacific Gas and Electric Co., known as PG&E, was a significant part of the strength of our State then experiencing rapid population growth.

Yes, we referred to the company in a snarky manner as Petty Graft and Extortion. But it was pretty tightly regulated by the California Public Utilities Commission because California really was politically "progressive" as a majority of the population had a vivid memory of The Great Depression, a memory sustaining skepticism of any and all activities of corporate and financial institutions.

But that was then, 50 years ago. Many critical choices were made between then and today.

The twenty-seven (!) titles of the Energy Policy Act of 1992 adopted by the Democratic-controlled Congress at the end of the Reagan Administration detailed various measures designed to lessen the nation's dependence on imported energy by providing incentives for clean and renewable energy and promoting energy conservation in buildings. It didn't raise liberal environemntalist eyebrows because it reflected simplistic thinking.

Yes, there were provisions requiring states to consider new regulatory standards that would require utilities to undertake "integrated resource planning" to create energy efficiency programs which would, of course, be at least as profitable as new supply options. It encourage improvements in supply system efficiency.

And, significantly, it would open things up to energy source alternatives. To us naive progressives that meant solar and wind. You see we didn't understand the implications, why Enron and others had successfully lobbied to open electrical transmission grids to competition by unbundling generation and transmission of electricity.

In fact, Northern California's electrical grid was based upon a complex system which evolved over the then 90-year life of PG&E, a system that not only included a complex infrastructure that involved not only PG&E's power-generation and power-distribution assets, but such things as Depression-Era-built government-owned hydro-electric facilities.

Economic choices entangled PG&E's finances with a set of government policy determinations made over that 90-year period, choices that balanced the income requirements of infrastructure construction and operation costs with customer interests and corporate profitability, economic choices made by the California Public Utilities Commission (CPUC) using a regulatory system that began with a 1911 Constitutional Amendment.

Nonetheless, as explained in the Wikipedia article California electricity crisis:


In the mid-90's, under Republican Governor Pete Wilson, California began changing the electricity industry. Democratic State Senator Steve Peace was the Chairman of the Senate Committee on Energy at the time and is often credited as "the father of deregulation". The author of the bill was Senator Jim Brulte, a Republican from Rancho Cucamonga. Wilson admitted publicly that defects in the deregulation system would need fixing by "the next governor".
The new rules called for the Investor Owned Utilities, or IOUs, (primarily Pacific Gas and Electric, Southern California Edison, and San Diego Gas and Electric) to sell off a significant part of their electricity generation to wholly private, unregulated companies such as AES, Reliant, and Enron. The buyers of those power plants then became the wholesalers from which the IOUs needed to buy the electricity that they used to own themselves.
While the selling of power plants to private companies was labeled "deregulation", in fact Steve Peace and the California legislature expected that there would be regulation by FERC which would prevent manipulation. FERC's job, in theory, is to regulate and enforce federal law, preventing market manipulation and price manipulation of energy markets. When called upon to regulate the out-of-state privateers which were clearly manipulating the California energy market, FERC hardly reacted at all and did not take serious action against Enron, Reliant, or any other privateers. FERC's resources are in fact quite sparse in comparison to their entrusted task of policing the energy market. Lobbying by private companies may also have slowed down regulation and enforcement.

In other words, the private sector with the full cooperation of Democrats in Congress and the Clinton Administration (Third Way Democrats of the "Greed is Good" generation, not progressives), screwed California utility ratepayers by not implementing a FERC regulatory system. Naturally Clinton left office with an approval rating of 68 percent, which matched those of Ronald Reagan (who signed the Energy Policy Act of 1992) and Franklin D. Roosevelt as the highest ratings for departing presidents in the modern era.

To make a long story short (you can read it in its entirety at California electricity crisis) in 2001 PG&E went bankrupt and in 2003 the voters replaced Democratic Governor Gray Davis with Republican Arnold Schwarzenegger, which make sense because the last Republican Governor Pete Wilson signed the bill that created the whole mess, a bill written by a key Republican State Senator.

PG&E customers like me saw their electric bills at least double to pay for the costs created by the mess, not for replacing old transmission lines, a task which also needed all that money.

So with the advent of deregulation favored by the "Greed is Good" generation which generation also failed to aggressively address Climate Change, the Town of Paradise burned up a decade later. And we are now turning the power off because of those old, old transmission lines.

It should be noted that when the utility Pacific Gas and Electric came out of bankruptcy, it became the leading subsidiary of the holding company PG&E Corporation. Now it again has filed for bankruptcy with the holding company attempting to make the electric transmission and generation portion not subject to any state regulation.

Governor Gavin Newsom, who took office in January, has already been blamed for what is going on.

Some people are suggesting that the State of California create a publicly-owned utility and just take over PG&E's assets.

In the meantime, the current bankruptcy judge has allowed the creditors (mostly hedge funds) an equal say with the shareholders (the largest group of which are ...can you guess... hedge funds) in the plan for the company to exit bankruptcy which has raised some interesting prospects.

California does lead the way. Climate Change is impacting our economy in ways not anticipated. Having a significant increase in the number of days each year we experience extremely low humidity and high winds has resulted in huge annual structural fire losses because of wildfires.

Probably no one should be surprised that thousands of homeowners saw the loss of their homeowners insurance or huge premium increases. But in Northern California it has resulted in power shutoffs which have had major economic impacts only now beginning to be understood.

In 2017 we read California invested heavily in solar power. Now there's so much that other states are sometimes paid to take it. That headline reflects the fact that government agencies are encouraging many investors to experiment, not really knowing what the outcome will be, not unlike in the 1990's.

Then there is this policy: Starting in 2020, all new homes in California must come with solar panels. Talk about a policy with significant impacts known and unknown. Right now the discussion is over the fact that it increases the cost of a home in the state with the most homeless people. Thus you read:


The Energy Commission estimates that solar panels will save homeowners an average of $19,000 over 30 years but add roughly $8,400 to the upfront cost of a single-family home — probably pricing many potential buyers out of the market.
According to a study from the National Assn. of Home Builders, every $1,000 increase to the cost of a home makes 52,903 households unable to afford a house. At that rate, a jump of $8,400 would keep about 444,385 households from buying a home.
Affordability is the main concern for the California Building Industry Assn., which represents around 3,100 builders across the state and 85% of all new single-family and multifamily housing production.
“For $2-million homes, these mandates might not be a big deal,” Chief Executive Dan Dunmoyer said. “But in markets like San Bernardino, this will be a factor for thousands of families trying to buy homes.”

Right now that is the focus of the discussion and it looks like we don't even know what we're doing in this peculiar process of completely redoing our energy system, a process that began 25 years ago then making decisions resulting in economic disasters in less than a decade and now wildfire disasters. The cost of the home rises. But utility costs will offset that over a decade or two. Anyone tell the mortgage lenders? Will the additional cost be factored in as $0 impact on buyer income needs because our legislature has adopted a policy on that? Or are we just thinkers so shallow even the obvious doesn't get addressed?

Of course, there are solar enthusiasts. They'll tell you solar panels are great. They have a long life, at least 30 years. At least, that's what we know based on the efforts of solar enthusiasts. Ordinary people, on the other hand don't see or hear any real discussion of routine maintenance needs and occasional failures. Those enthusiasts crawl up on their roofs and follow the instructions in Best Way to Clean Solar Panels.

Or will the utilities discover that within ten years a significant dropoff of output from those solar panels has occurred because they are covered with dust and smoke because of the winds? Will they discover this just after they've shut down other sources of power? Do the powers that be intend to mandate maintenance levying a monthly charge from each homeowner who doesn't think climbing on their roof is within their ability? 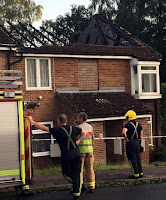 And the policymakers do realize that solar panels produce electricity, the source of those sparks from PG&E lines that started fires. Are they aware of headlines like Possible storm damage could have sparked Danbury roof-top solar panel fire and Warning about solar panels after fire in Wellbrooke Gardens (picture at left)? And of course they considered Rooftop Solar Panels Are Great for the Planet—But Terrible for Firefighters and included additional funding for extra training and equipment the hundreds of fire departments around the state.

Or are Californians a decade from now just going to suffer rotating power outages because we don't know what we are doing and won't take the time to study the problems?

And, of course, nobody will remember that this started with the Energy Policy Act of 1992 which resulted in the Enron debacle and PG&E's first bankruptcy because it is complicated and nobody in politics does complicated well.

By the way, PG&E shared photos like those below of vegetation on de-energized power lines in Shasta, Glenn, and Napa Counties to demonstrate why they felt it was necessary to turn the power off during the red flag warning. 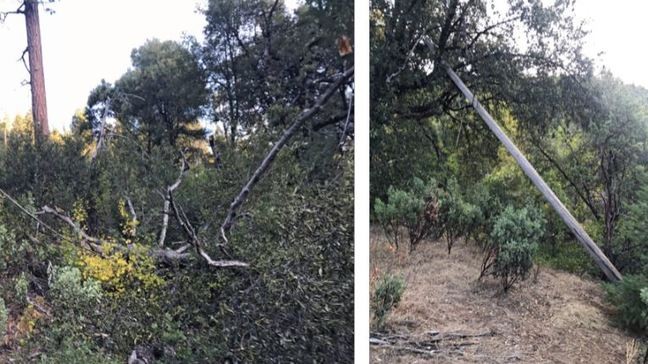