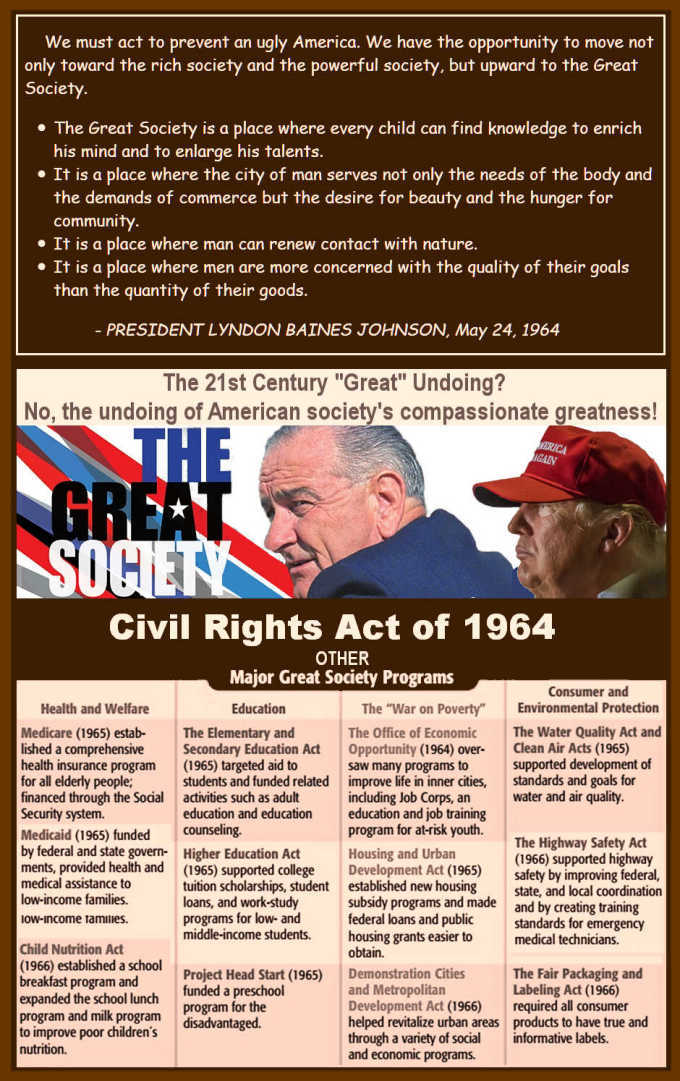 It was no Blue tsunami and waves recede immediately

It's hard being old for many reasons. But being an old Democrat who remembers what was achieved in America and in California by 1966 causes one heartache. As can be seen above President Lyndon Johnson had successfully led the country in major policy achievements. His goal was "The Great Society" outlined in a speech in 1964.

In California we had our own stuff - for instance, a tuition-free state college system available to all, the result of efforts by our Governor Edmond G. "Pat" Brown. It was the kind of thing Bernie Sanders never implemented in his tiny state of Vermont but thinks in the early 21st Century he can impose nationwide.

And I use the word "impose" deliberately.  You see, California was liberal back then until the voting middle class discovered being liberal actually cost them money. Pat Brown was able to work through tuition-free policies because at the time skyrocketing property tax revenues were funding K-12 permitting the state to use rising sales and income tax revenues for such things as tuition-free college for everyone.

Paying for things has never really been a liberal strength, even in California regarded today as the bluest of blue states. Red is always there waiting to pounce. In California the Neoliberal influence became evident in 1967 when Ronald Reagan defeated Pat Brown in his attempt at a third term.

(FYI - Reagan went on to become President in 1981 because he was the America's most effective spokesperson for Neoliberalism using the alternative reality game. His internship among the Neoliberals started 26 years before he was nominated for President. Reagan was hired by General Electric (GE) in 1954 to host the General Electric Theater, a weekly TV drama series and to give talks to over 200,000 GE employees as a motivational speaker. His speeches carried the Neoliberal re-education message influenced by Lemuel Boulware, a senior GE executive whose ideas have been called "Boulwarism.")

By 1978 California voters passed Proposition 13 which basically defunded higher education. By 1982 California voters placed an index on the income tax. Lest anyone think California is, and has always been politically liberal, it hasn't. And the conservative California gift to America was Reagan beginning the task of dismantling The Great Society.

In the meantime, heartened Neoliberals moved forward to take over the state legislatures and executive offices in other states. They succeeded.

As the Neoliberals moved to victory through the states, the Democrats lost state legislative seats, whether their Presidential candidate won or not. That's because their opponents are not confused, as explained here in April 2017:


...Over a period of 70 years, between 1947 and 2016, one group of ideologues - the Neoliberals - achieved effective control of most state government$ in the United States and, at this time somewhat less effectively, taken control of the U.S. House of Representatives. And to some degree their view is strongly represented on the Supreme Court.

In fact, the shift from 1976 to 2016 within the important government$ of the United States, the state legislatures, looks like this (focus on Nebraska which has a unicameral legislature that is supposedly non-partisan).

And then notice the map that has been added subsequent to the 2018 mid-terms. Democrats did firm up control in Washington, New Mexico, New York, and Maine while winning the ever-changeable New Hampshire. But it was not really a loss for the Koch Brothers Neoliberal organizations because they firmed up control in Kentucky and Iowa. These changes are minor compared to the 2010 election, when Democrats lost 24 chambers.

As I've noted here numerous times, important political positions exist in the United States in the state legislatures (followed by state executive positions). I know this is difficult for many Democrats to accept because it's more fun to campaign for a few days every four years for a Presidential candidate than to spend many, many days out of every year assuring the election of thousands of Democratic candidates to the lower house of the state legislature. And that is exactly why the Democrats have so little clout over domestic policy within the majority of states.

The U.S. Constitutio,n designed to create a Union of internally independent states, was structured to retain the broadest government power within the state governments. 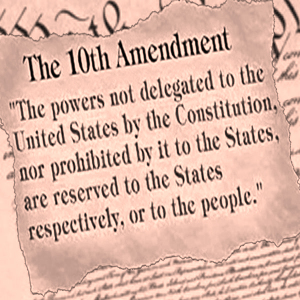 Or to put it another way, the 10th Amendment explains that the United States Union was created to smooth out commerce across state and international boundaries, provide for a common defense of all states in the case of an attack by an outside foreign government, and a few other minor related items.

These were things state legislatures were supposed to take care of. And if you haven't noticed, whether it's Obamacare or abortion, it is the legislatures that address those issues, and in a majority of cases not in a way we Democrats like.

There is, of course, one exception to the grant of powers to the legislatures not put in place by our Founding Fathers, but rather the result of the Civil War. That is the 14th Amendment which specifically provides that: "No State shall make or enforce any law which shall abridge the privileges or immunities of citizens of the United States; nor shall any State deprive any person of life, liberty, or property, without due process of law; nor deny to any person within its jurisdiction the equal protection of the laws." Note that it does not give Congress any additional powers. But it does give the federal court system a standard by which state laws can be reviewed.

The Civil Rights Act of 1964 was a law of the United States government making unlawful segregation in public places and banning employment discrimination on the basis of race, color, religion, sex or national origin. The legislation had been proposed by Democratic President John F. Kennedy in June 1963, but opposed by filibuster in the Senate. It is considered one of the crowning legislative achievements of the Democratic President Lyndon Johnson. But was it a the death knell of the Democratic Party within the Union (let's be clear, the Union is not a Union of people, but a Union of states). Consider these two graphics: 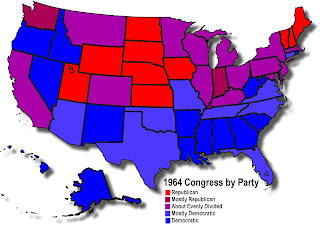 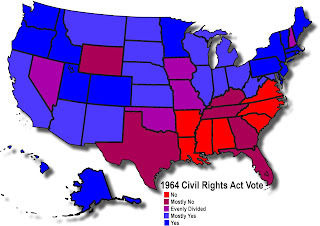 Now reconsider the graphic showing the changes in partisan control as you consider the following from Wikipedia:


Note: "Southern", as used in this section, refers to members of Congress from the eleven states that made up the Confederate States of America in the American Civil War. "Northern" refers to members from the other 39 states, regardless of the geographic location of those states.

Finally, give some thought to those economic/environmental programs of  Johnson's Great Society in the context of how the Koch Bros and the Neoliberals generally must have reacted. It explains why they settled in to plan and then carry out a long term strategy to take control of the state governments. 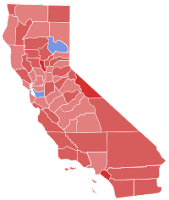 Finally, recognize that in the 1966 "mid-term" Ronald Reagan ran in California against Pat Brown and won big time (see map to the left). And a "new" Ronald Reagan would win again in California if some well-intentioned liberal succeeded in raising enough tax revenue to cover the cost of a tuition-free higher education.

Priorities are priorities. In this election, Californian's just approved a major gas tax increase for maintenance of highways and roads. As noted by The Road Ahead: The Automobile's Impact on California: "Since 1898, the automobile has helped to shape and define the California way of life, creating what has been called the world's first 'auto-civilization.'” And that is a true, albeit unfortunate, fact about California in the face of Climate Change. We aren't that different from the rest of the United States even if we push alternative energy sources.

As of last year, 356,241 electric cars were registered in California—comprising just slightly more than 5% of the total autos found on the state’s freeways. While that number also represents nearly half of the more than 700,000 EVs in the entire country, we're a long way from not needing gasoline. Nonetheless, California's gas consumption has fallen almost twice as fast as U.S. gas consumption. California gas consumption peaked in 2005 at 15.9 billion gallons. The Great Recession had a major negative impact on gas consumption. However the trend may be changing as gasoline demand in California has climbed each year since 2013.

Anyway, in this fine 2018 Midterm Election Year ... hmmm. "mid term?" I guess because it's in between Presidential election years, we name it that.

But every second year - every even numbered year - is a legislators' regular election year, and many of those positions are two-year terms. It isn't "mid" term for thousands of legislators. But that's how unimportant the social and news media dialogue has made the most important political offices in the United States.

Many of the state legislators elected on Tuesday, along with legislators elected in 2020, will get to redesign the Congressional District maps along with their own district maps, hopefully without as much gerrymandering favoring Republicans. Those district boundaries will be set for 10-years thereby creating disadvantages for Democratic candidates in Red States for a decade.

Not that Democrats don't officially notice this.

Really? This had to be stated in a memo to the Democratic Party explaining:


With less than 30 days left until Election Day, there is no question this is the most important election of our lifetime. From the Supreme Court to voting rights to education to health care to redistricting — our democracy is on the ballot. With more than 6,000 legislative seats up for election, Democrats have the opportunity to flip seats across the country, even in districts that Trump won in 2016.

Maybe I can hope that the National Democratic Party can provide me with a party that wins outside California. But sometimes I think 21st Century Democrats embrace the idea of being U.S. citizens without being state citizens or county citizens. They apparently lost interest as soon as the 14th Amendment was adopted because it says: "No State shall make or enforce any law which shall abridge the privileges or immunities of citizens of the United States; nor shall any State deprive any person of life, liberty, or property, without due process of law; nor deny to any person within its jurisdiction the equal protection of the laws."

But what they don't get is that  "privileges or immunities of" U.S. citizens are pretty much limited to interstate commerce, national defense, and Bill of Rights (first 10 Amendments) issues. And "due process of law" is all that is needed for any state to "deprive any person of life, liberty, or property." The only fuzzy constraint is that a state cannot deny any person "the equal protection of the laws." In other words, being an active U.S. citizen every four years without being an active state citizen every day doesn't get you much.

Beginning in 2019 we here in California again will have a Democratic supermajority in both houses of the State Legislature and our new Governor, Gavin Newsom, holds strongly liberal positions. So it remains to be seen whether we can screw things up bad enough to create a Neoliberal resurgence among California's middle and upper classes in the next decade.

We just aren't that blue. After all, our 2018 Governor's race results by county looks like this: 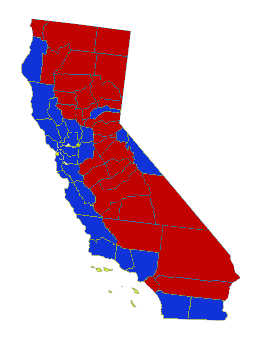