Disruption, of course, is just change at a higher speed. Humans have always had disruption - the death of someone important to you is an instant disruption. We had rituals, better than those we have today, to deal with a death of someone you love and the process of moving forward in time.

But a way-of-life means "the typical pattern of behavior of a person or group." The above definition of "disruption" in the context of a way-of-life creates psychological trauma which is defined as follows:

Psychological trauma is a type of damage to the mind that occurs as a result of a severely distressing event. Trauma is often the result of an overwhelming amount of stress that exceeds one's ability to cope, or integrate the emotions involved with that experience. A traumatic event involves one's experience, or repeating events of being overwhelmed that can be precipitated in weeks, years, or even decades as the person struggles to cope with the immediate circumstances, eventually leading to serious, long-term negative consequences.

The thing is, somewhere around 2012-13 researchers began to notice a change in death age patterns among Americans. The media began to catch on to it in 2016 and The Washington Post did an extensive set of stories beginning with this:

White women have been dying prematurely at higher rates since the turn of this century, passing away in their 30s, 40s and 50s in a slow-motion crisis driven by decaying health in small-town America, according to an analysis of national health and mortality statistics by The Washington Post.
Among African Americans, Hispanics and even the oldest white Americans, death rates have continued to fall. But for white women in what should be the prime of their lives, death rates have spiked upward. In one of the hardest-hit groups — rural white women in their late 40s — the death rate has risen by 30 percent.
The Post’s analysis, which builds on academic research published last year, shows a clear divide in the health of urban and rural Americans, with the gap widening most dramatically among whites. The statistics reveal two Americas diverging, neither as healthy as it should be but one much sicker than the other.

California is not an exception as made clear in this Fresno Bee article:

Young and middle-aged whites in the Southern Central Valley are dying at an increasing rate, researchers said Wednesday at the release of a preliminary report that they said reveals a “health crisis of white death.”
The report for the California Endowment found that in four counties – Fresno, Kings, Tulare and Kern – the death rate for whites was almost 40 percent higher than the overall white death rate in California from 2010-14.
“The deaths are occurring among a population struggling with unemployment, wage stagnation and poverty rates,” said Dr. Steven Woolf, lead author of the study and director of the Center on Society and Health at Virginia Commonwealth University. “The economy is literally costing lives.”

That confirms the opinion Laudy Aron, a Senior Fellow at Urban Institute who co-authored a 2013, a sweeping study, “Shorter Lives, Poorer Health,” from the National Research Council and the National Academies’ Institute of Medicine, who noted for the Washington Post article:

I think we are undergoing a change that’s comparable to the Industrial Revolution - those of us who are lucky enough to have jobs are sort of clinging to them for dear life.

For California it is has been easier to deal with disruptive Climate Change, a subject which lends itself to advancing adaptive cool new technology for power generation and cars and trucks, plus despite bickering ending municipal treated water wasting in urban areas. In fact, these are part of the California tradition of economic discontinuity and displacement as explained in the previous post.

When you see this, though, you know...
...which despite the comparison, is moving much faster than the 200 years of the Industrial Revolution: 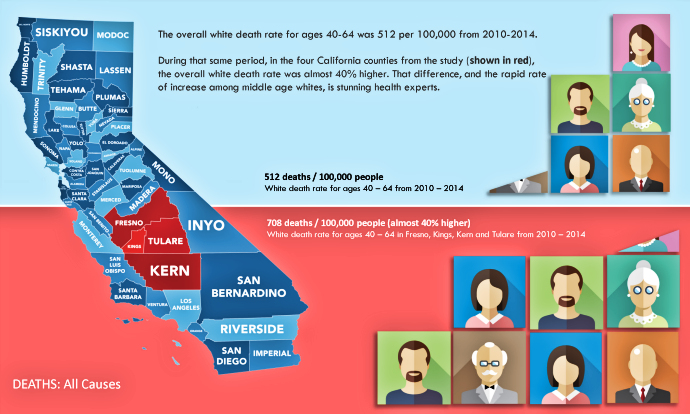 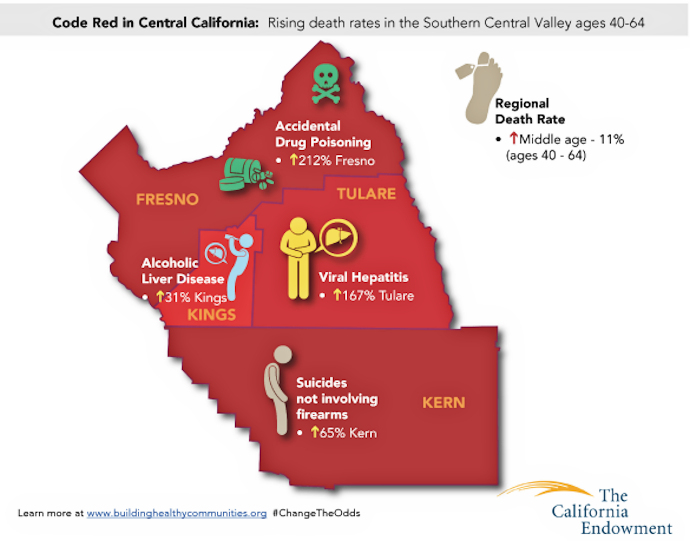 Sure, increasing the awareness of the problem will help those canaries. So would better physical and mental health care.

But creating "blue collar" jobs and modernizing agricultural jobs must be a serious goal for the rest of the 21st Century in California. We must lean heavily on our tradition of California Empirical Egalitarian Progressivism.

In fact, these active disruptors will have to get over their Neoliberal tendencies.... 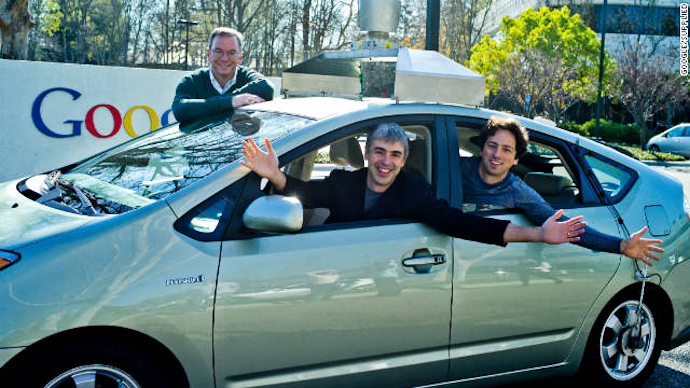 ...and be happy that a Gas-tax increase to pay for road repair clears California Legislature:

The legislation will raise the money to pay for the plan over 10 years. It raises the base gasoline excise tax by 12 cents, creates a transportation improvement fee based on the value of a vehicle and raises diesel excise and sales taxes.
“This bill will provide hundreds of thousands of jobs for poor people who need work and it will stimulate the economy,” said Sen. Jim Beall, D-San Jose, who introduced Senate Bill 1. “For me, this is a wise plan that’s a modest plan.”
Republican lawmakers criticized the deal for putting a burden on ordinary Californians to pick up the bill for the Legislature’s failure to prioritize spending on roads without raising taxes.

In addition to the fee based on value, electric car owners will pay their share through a $100 vehicle fee for zero emission vehicles as outlined in What Californians need to know about the state’s $52-billion transportation plan.

Senator Beall is correct about the plan. In addition to fixing our roads which are a mess, the taxes and fees will be putting people to work in construction over a decade, mostly in blue collar jobs. If Donald Trump can get Congress to spend some money on an infrastructure program, that would create blue collar jobs.

We need to become job creators in a creative way. Many ways to give people blue collar jobs in California exist.

For instance, At the end of the drought, the Sierra Nevada contained 102 million dead trees. We could, a probably will, let them burn in catastrophic fires. Catastrophic fires don’t stimulate regrowth, as lesser fires do: The hotter temperatures they generate scorch the landscape and destroy the seeds needed for plant regeneration. That leads to severe soil erosion, landslides and devastated wildlife. Megafires also blanket large areas of the state with sooty black carbon, which is toxic to humans and a notorious climate pollutant, with a global warming potential 3,200 times more potent than carbon dioxide.

As the Los Angeles Times points out some clever folks have thought of A beneficial way to dispose of the Sierra's lost trees: Use them for energy. But the political and bureaucratic stumbling blocks will probably blanket large areas of the state with sooty black carbon, sort of a metaphor for 21st Century political bickering.

I hate to say this, but even Trump's wall will create blue collar jobs if it actually gets built. And just maybe it isn't quite as awful as the media and politicians on the left tell us.

First we need to rename it as the California Border Barrier Replacement Program. As I said in a prior post, "Regarding 'The Wall' we might want to look at a picture or two before we get all hot and bothered by that publicity." If you look at that pictures in that post you might discover we have a wall, an ugly wall, built by the Bush and Obama administrations which Trump's Deplorables may not have known about.

And now we learn from Trump's border wall will get its start in San Diego County:

President Trump’s proposed wall with Mexico will kick off in the San Diego border community of Otay Mesa, U.S. Customs and Border Protection confirmed Monday.
The community is home to one of two border crossings in San Diego and will be the site where 20 chosen bidders will erect prototypes of the envisioned wall. Winners will be selected around June 1, the agency said.
Of the possible border locations in the region, building the prototypes near the Otay Mesa crossing makes the most sense because it allows companies to test out designs in a heavily trafficked area that still has room and flexibility, according to Eric Frost, director of San Diego State University’s graduate program in homeland security.
Frost added the wall could be a benefit to both nations if, for example, it helps alleviate notoriously slow wait times for trucks crossing through Otay Mesa. He envisions an “intelligent wall” with sensors and wireless technology that can start tracking trucks before they reach a border guard, speeding up the process to move goods between the two nations.
“There’s a positive in here, if you can design a wall that works way better,” Frost said.

"If you can design a wall that works way better" in this context means not buiildng a new wall but replacing the following mess at Otay Mesa where where volumes reach over 55,000 vehicles daily and annually more than 700,000 trucks carrying more than $20 billion in goods pass through the northbound border crossing after being inspected: 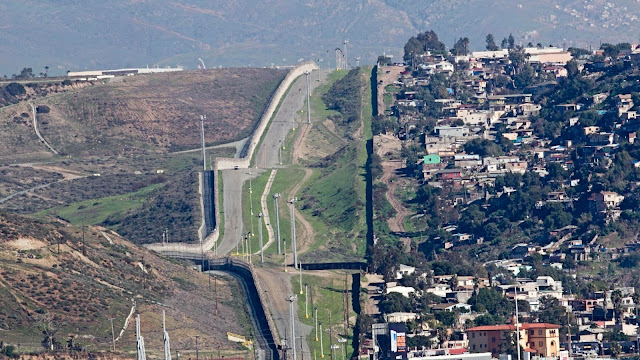 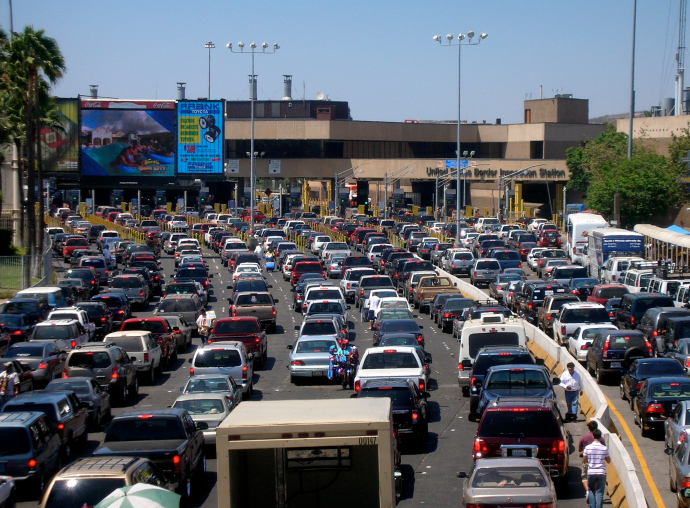 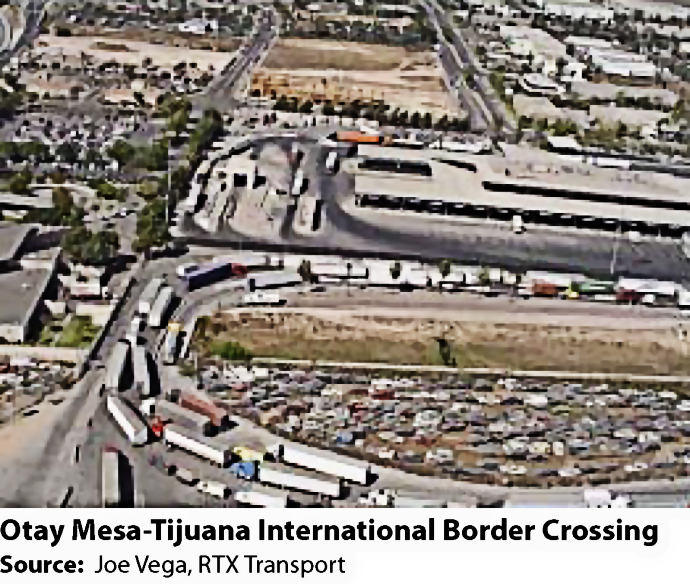 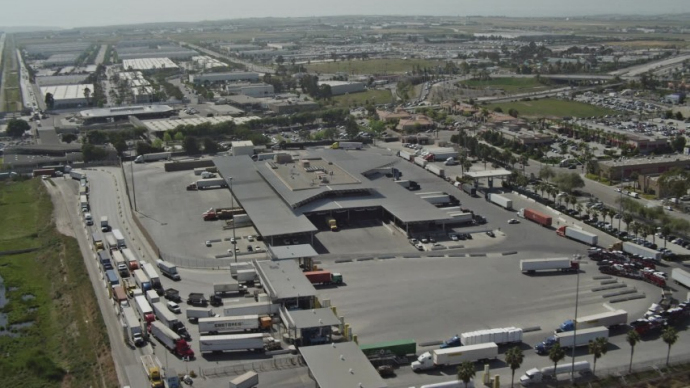 Whether Trump gets any other element of his own infrastructure plan approved, it strikes me that sometimes California's Democratic politicians and media need to become a little more cynically self-serving on behalf of the state. That Border Barrier Replacement Program could put a lot of blue collar Californians to work.

Of course, as I've noted before self-driving vehicles such as the tractor-trailer rigs shown in the pictures will start to eliminate positions for drivers in the next decade. And that "'intelligent wall' with sensors and wireless technology that can start tracking trucks before they reach a border guard, speeding up the process to move goods between the two nations" will reduce employee hours at the borders.

California, the home of Silicon Valley distributive technology, must continue to work to slow the 21st Century Disruption Way-of-Life enough to soften the blue collar disruption trauma. Creating road maintenance jobs over the next 10 years is a good start, but it is just a start.
Posted by Michael O'Faolain - at 4:48 PM