Why shouldn't we pick on Bernie "The Investment Mogul" Sanders?

This week we learn that Bernie and Jane "plopped down nearly $600,000" for a "lakefront camp" which "has four bedrooms and 500 feet of Lake Champlain beachfront on the east side of the island — facing Vermont, not New York. The Bern will keep his home in Burlington and use the new camp seasonally."

Or as the right wing Washington Examiner put it Bernie Sanders just bought a third home. Tell that to the 99 percent.

The bemused politically conservative British tabloid The Daily Mail offered with its story this photo... 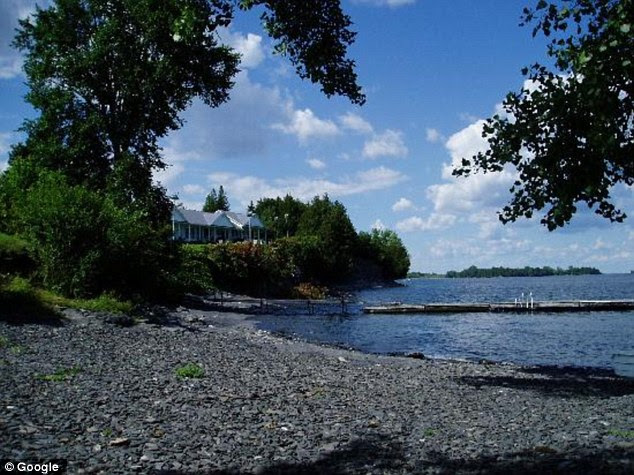 ...though to be fair about it they did note "The Sanders family had recently sold a lake house in Maine, which had been passed down from his wife's side of the family."

The Sanders now own real estate that reportedly include homes in the Washington D.C. neighborhood of Capitol Hill where the median home price is roughly $726,000, a home in Vermont that realtor.com values at approximately $320,000, and this $600,000 home - all totaling to real estate worth $1,646,000.

But, of course, that is not all.

Looking at the couple's assets other than real estate, a Money Magazine analysis of the Sanders other investment wealth concluded Bernie Sanders Is a De Facto Millionaire, as have others who have ignored the Sanders' "do-what-I-say" preaching and looked at the "not-what-I-do" of the man.

It bothered some that the millionaire couple only donated $8,350 to charity in 2014 making him the target of a story How Sanders’ charitable giving may undermine his central message:


But despite being in the top 4 percent of U.S. earners and living in relatively cheap Vermont, Sanders gave a mere 4 percent of his income to charity. Furthermore, his effective tax rate was a mere 13.5 percent. This is less than Mitt Romney, who was roundly criticized for paying a low percentage in taxes.

Unless we learn more from Sanders, which might put these numbers in a different context, he is a victim of his own critique: He is not paying his fair share.

In the tradition of the typical "hot-and-bothered" quadrennial-only American voter, Bernie supporters denied the truth about Bernie's personal finances during the primary campaign.

But now they are going to take care of his hypocritical behavior with tweets as noted in this story Fresh Off His Campaign to Make Socialism Great Again, Bernie Sanders Buys $600,000 Summer House:

But Bernie still has his defenders on the internet as we learn from Please Stop Shaming Bernie Sanders for Buying a House which offers up Bernie's curious redefinition of socialism that during the primary campaign went right over the heads of most of his fervent, but ignorant, quadrennial-only-American-voter followers:


These tweets also seem to fundamentally miscomprehend what Sanders' democratic socialism is actually about.

“To me, democratic socialism means democracy. It means creating a government that represents all of us, not just the wealthiest people in the country,” Sanders said at a fall debate.

Sanders' campaign platform focused on income inequality via regulating big banks, reforming campaign finance, and making healthcare and college more affordable. These jabs use a misapplied pop-cultural caricature of socialism to portray Sanders as hypocritical, but miss the point that his democratic socialism never called for "taking people's stuff," or preventing people from doing well enough to buy houses.

Actually, if these folks would switch from their Twitter app to a Wikipedia app (they may have to download that because I don't believe most care about learning anything), they could learn:


Democratic socialism is a political ideology that advocates political democracy alongside social ownership of the means of production, often with an emphasis on democratic management of enterprises within a socialist economic system. The term "democratic socialism" is sometimes used synonymously with "socialism"; the adjective "democratic" is often added to distinguish it from the Marxist–Leninist brand of socialism, which is widely viewed as being non-democratic in practice.


I'm old like Bernie, and though I am not as wealthy as Bernie, my life is comfortable. So I can't begrudge him his wealth.

But I wish he had been more honest than the typical politician because Bernie knows democratic socialism indeed calls for "taking people's stuff" and limiting their wealth. He just wasn't honest with the very poorly educated ignorant college students and graduates supporting him who don't want to learn anything about political history.

At least neither The Donald nor Hillary can mislead people into thinking they live like the ordinary family.

It would have distinguished Bernie from politics-as-usual if he regularly offered up a disclaimer that for a couple their age the Sanders are among the 1%.1

1 You likely do not understand who "the 1%" mathematically are which I point out in 4. Dissidents in American Politics: Who are we angry at? as part of my series reflecting the theme: " One can't help but ponder, to consider the historical context, about how too many 20th Century American dissident voters (and yes, all current voters were born in the 20th Century) brought America back to where we are today."