Images of The Great Depression most frequently include two focal points: (1) the unemployed, either selling apples or standing in line for food and (2) the Dust Bowl.

Because we now have the so-called "safety net", we haven't seen pictures of  anyone selling apples, though pictures of people standing in line for unemployment or food stamps were in newspapers in 2008 and 2009.

Now the other shoe has dropped.

If you didn't read the stories or hear the subject discussed on TV news, half of the United States, including areas in the 1930's Dust Bowl, officially has been or likely will be declared a drought disaster area. You can read the Department of Agriculture news release or do a Google News Search on "drought disaster" to bring yourself up-to-date. But here's the map: 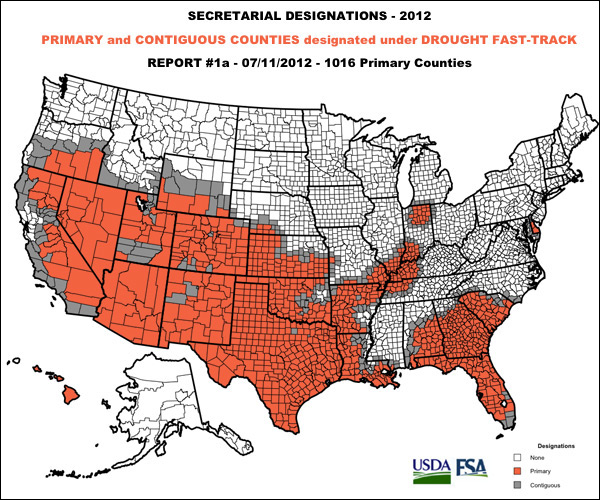 When people start running for the Presidency, the candidates and the public think they know what issues are important. Of course, that is not true. George Bush and Al Gore did not run on how to fight terrorism in 2000. When Barack Obama decided to throw his hat into the primary ring against Hillary Clinton, the idea of an economic crash was not on the voters minds.

The current hot button issue is not this year's drought conditions even though one agricultural economist called it a "$50 billion event for the economy as it blends into everything over the next four quarters", with the important element of the "event" being the amount of extra money it will take for Americans to buy food combined with government insurance program payouts to farmers which will come from the borrowing.

But what could potentially be a major problem for either President Obama or Mitt Romney would be the continuation of this drought, which in many areas is already a multi-year drought. If the hot dry weather continues into next year, the potential economic impacts will be significant. Feed corn and hay will become scarce and prices will skyrocket forcing up the price of meat. Dairy farms and poultry producers will be confronted with a scarcity of feed.

Of course, in theory we could "outsource" by importing, but Argentina, among other alternative sources, is being slammed by drought also.

Climate change anyone? Does anyone running for President relate this to a potentially immediate worsening of the economic crisis?

And has anyone great and wise in California's Capitol wondered how this might affect The Great California Slump other than having a shortage of snow up at Tahoe next Winter?
Posted by Michael O'Faolain - at 2:08 PM